The End Of A Trying Year

The year’s final quarter witnessed material improvement for many energy sector benchmarks. U.S. crude oil prices climbed to $48.52 per barrel by December 31, a 21% gain from the end of the third quarter in 2020. WTI prices ranged largely in the high $30s to low $40s until a noticeable jump began in mid-November. Overall, the year displayed breathtaking volatility, with crude oil prices beginning in the low $60s, plummeting during the early days of the pandemic including a drop into negative territory in April, before rapidly climbing through the second half of the year. The drilling rig count grew steadily during the fourth quarter, continuing a positive trend that began in mid-August 2020. The rig count increased 35% or by 90 rigs during the quarter (Baker Hughes), which represented the best quarterly rig count growth since the first half of 2017. Completion activity also rebounded with the number of active frac spreads moving from approximately 120-125 spreads in the third quarter to approximately 135-140 spreads in December 2020. While the percentage increase is not striking, the growth is notable given the usual slowdowns during the holiday periods in November and December. Natural gas was arguably the weakest energy benchmark, closing the quarter at a similar level ($2.53 in Q3 compared $2.54 in Q4). While natural gas prices witnessed material gains in October (32.7%), there were substantial declines in November (14%) and December (12%).

According to the U.S. Energy Information Administration (“EIA”) U.S. crude oil production declined from more than 12.8 million barrels per day in January 2020 to 11.2 million barrels per day in November 2020 (the most recent data available). The EIA anticipates U.S. crude production to modestly decrease in Q1 2021 due to Lower 48 production declines. However, improving demand for hydrocarbon products (as COVID-19 vaccines are distributed and restrictions eventually relax) is expected to bolster the global energy industry. The Biden administration has already signed several executive orders including rejoining the Paris Climate Accord, pausing offshore and Federal land leasing and permitting activity as well as ramping up regulatory scrutiny (e.g., Keystone XL permit revocation).  These have been largely in-line with the agenda highlighted during his campaign. See table below regarding the Biden Administration energy agenda.

Bankruptcies continued to accumulate during the quarter as firms exhausted liquidity. While improving oil prices have increased cash flow, many firms have debt levels that are not sustainable (particularly in the face of looming maturities). Recent M&A activity within the energy service and equipment segment has been largely focused on production and well services.

WTI crude front month oil prices closed the fourth quarter 21% higher than the third quarter, increasing from $40.22 per barrel to $48.52. Research analysts have forecasted median prices of $44.00 and $45.50 for the first and second quarters of 2021, respectively. U.S. crude production is expected to remain between 11.02 and 10.33 million barrels per day through 2021. 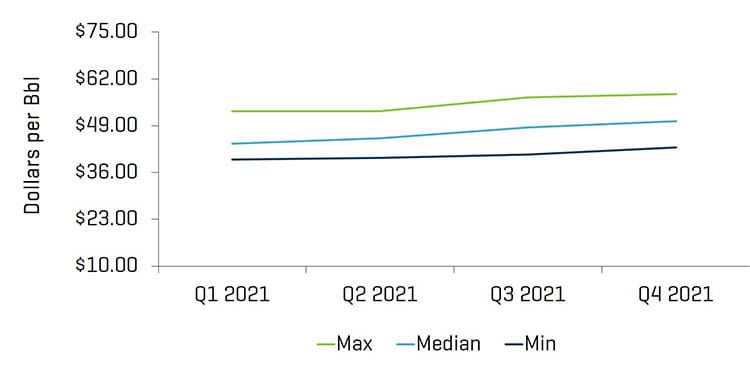 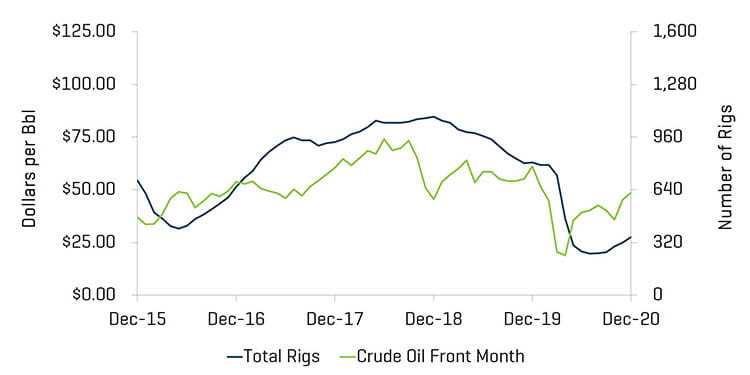 Overall, public valuations for energy service companies increased during the quarter, increasing 59.3%. Year-over-year performance for energy service companies was down 43.4% as the sector continues to trail the overall U.S. market (up 11.7% during the quarter and 16.3% year-over-year), as the impact of COVID-19 on global energy demand remains the key driver of suppressed investor sentiment. 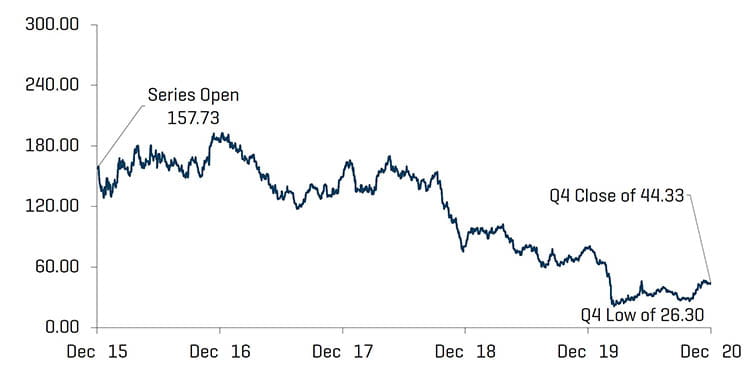 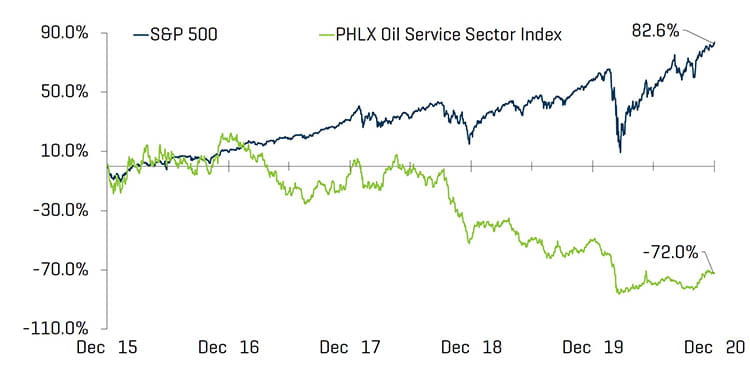 The fourth quarter saw another increase in the number of bankruptcies within the energy industry. Despite easing quarantine restrictions, many industry participants feel continued distress from suppressed demand.  Oilfield service companies represented the majority of filings during the quarter. 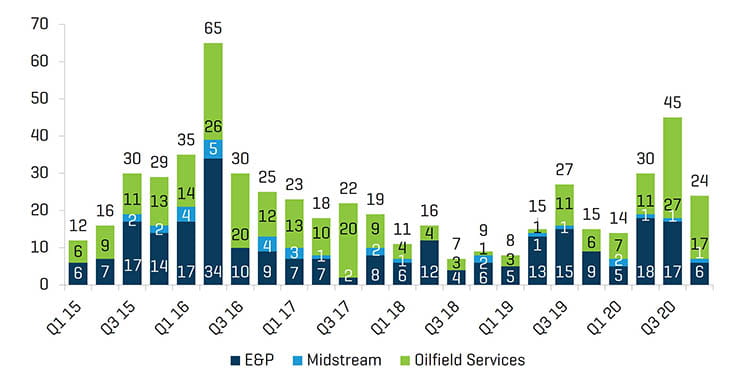 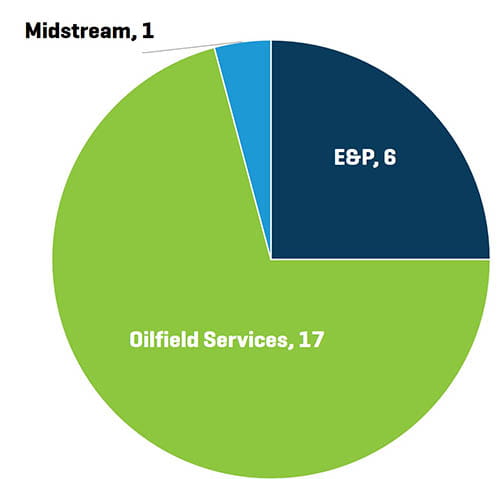 Energy service and equipment M&A activity remained similar by deal count and increased by value in the fourth quarter of 2020, totaling 19 transactions and $667.8 million, down slightly from 20 transactions and up from $582.0 million in the third quarter of 2020. Similar to the prior quarter, much of this quarter’s transaction value was driven by a single transaction: Caterpillar’s acquisition of Weir Group’s Oil and Gas division for $405 million. The outlook for 2021 M&A and financing activity in the Energy sector is likely to remain subdued until oil demand meaningfully recovers and financing is more readily available. Mid-2021 should see increased M&A activity as the vaccines are more widely distributed and business/travel accelerates. 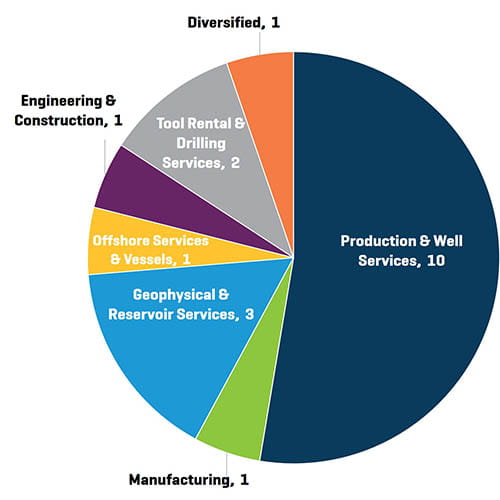 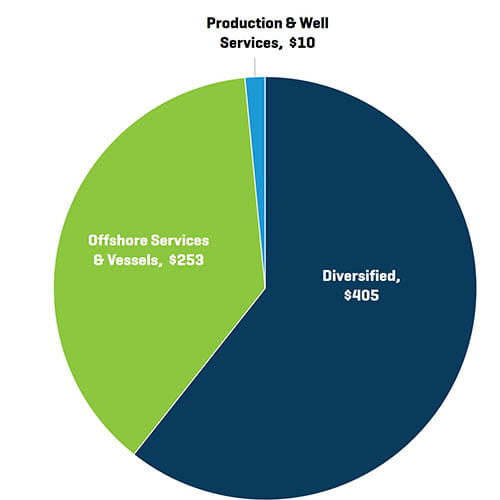 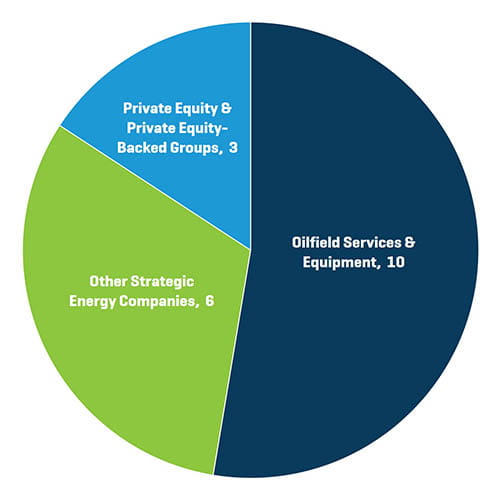 Strategic acquirers were the most active acquirers of Energy Service & Equipment businesses during the fourth quarter of 2020, representing 84.2% of all transactions (by count). PE and PE-backed groups are expected to remain muted buyers as debt financing remains challenging. 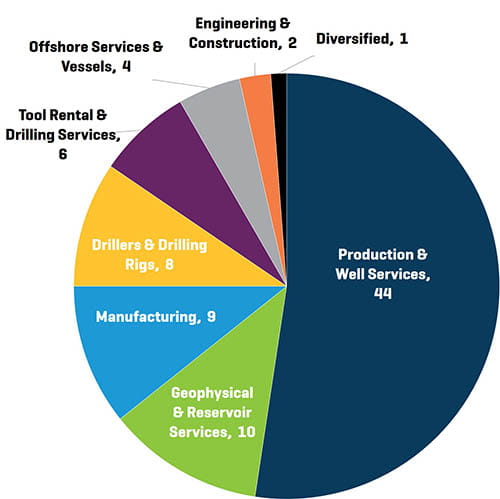 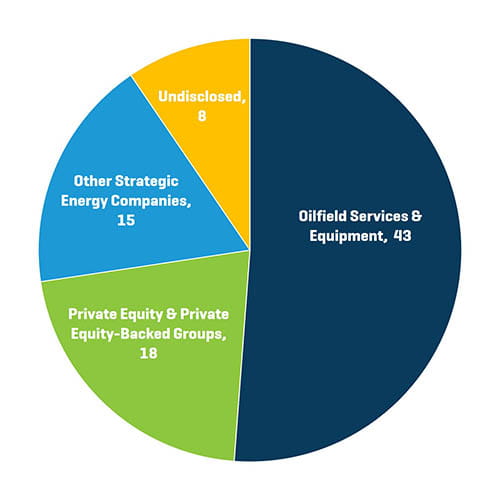 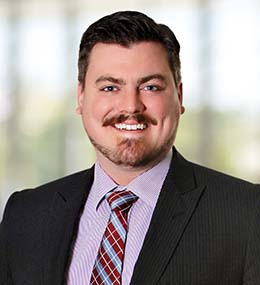 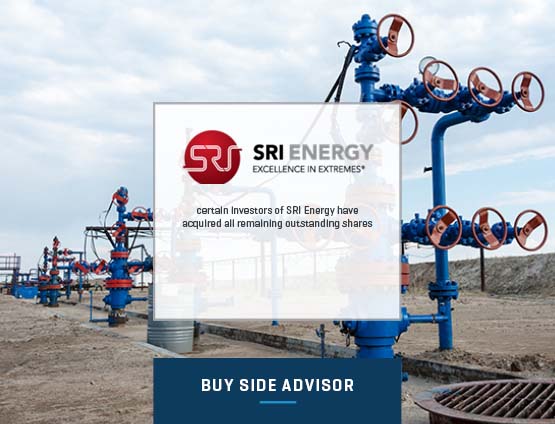