Learning lessons from the past?

In the second quarter of 2019, the energy markets exhibited signs of self-moderating. WTI crude oil prices experienced several days of significant volatility, while remaining largely range bound between the mid-$50s and mid-$60s per barrel. U.S. drilling rig counts continued to decline while production set new high-water marks as the quarter progressed. Although production remains at all-time highs, U.S. producers are cutting rigs and frac spreads due to concerns around not only excess supply, but also demand, which is being driven by trade war issues and concerns of a global slowdown. U.S. producers also continue to remain focused on price stability and living within cash flows, which may serve as a moderate headwind to local production. Takeaway capacity remains a constraint in moving production to market, particularly in the Permian Basin; however, the downstream market continues to benefit from ample feedstock supply. Oilfield service and equipment activity remains very competitive in key regions (Permian), which is driving margin compression. The quarter also experienced an increase in oil majors moving into the Permian Basin (e.g., Chevron, Exxon, etc.), which is not expected to provide margin relief, but could smooth cyclical production volatility as the majors, relative to the independent producers, are less likely to pull production when prices fluctuate. Natural gas remains a challenged market, with no signs of price recovery in the foreseeable future.

After a quarter marked by several days of significant price declines, WTI crude oil prices closed the second quarter remarkably level with the end of the first quarter, decreasing slightly from $60.14 per barrel to $58.47. WTI crude prices fluctuated relatively significantly during the quarter reaching a high of $66.30 early in the quarter (April 23) then steadily declining to a low of $51.14 on June 12. Prices recovered late in the quarter, increasing more than 14% from June 12, reversing declines experienced through the five most volatile days of downward movement, which accounted for a total price decline of more than 22%. The relative stability has been driven by a couple of factors: 1) tighter crude oil supplies due to outsized OPEC production cuts (particularly from Saudi Arabia and Venezuela); and 2) stronger than expected global growth (recent manufacturing data from China and the United States have been positive) which have bolstered crude oil demand expectations.

Following suit with the first quarter of 2019, natural gas experienced less daily volatility in the second quarter; there were two days during the quarter in which natural gas prices moved more than 3%. However, natural gas prices continued to decline throughout the quarter. The EIA expects relatively stable prices in the second half of 2019 as the impact of increasing demand driven by industrial, petrochemical and LNG end users is anticipated to be moderated by continued record production. 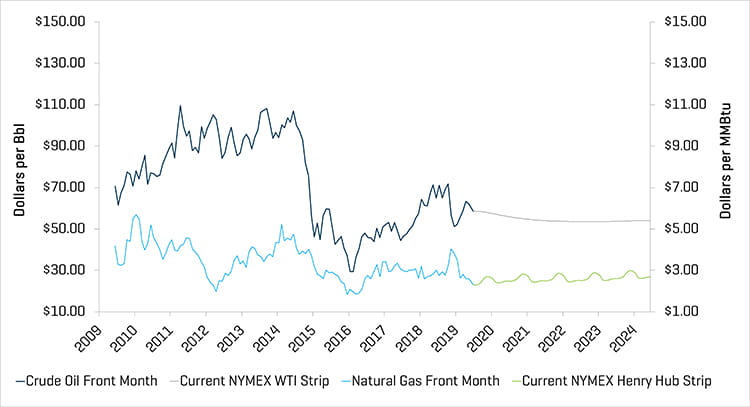 The North American market continues to witness drilling and completion efficiency and growth in production. U.S. crude oil output surpassed 12 million barrels per day in April 2019 and has remained above 10 million barrels per day since February 2018. However, a number of producers are focused on living within cash flows and have tempered drilling and completion plans for 2019. The average U.S. land rig count decreased by 39 rigs, from 1,006 to 967 rigs during the quarter. With the exception of the Utica Basin, most regions experienced declines in their rig counts, most notably the Eagle Ford and Marcellus, both down by seven rigs, and the Permian down 13. 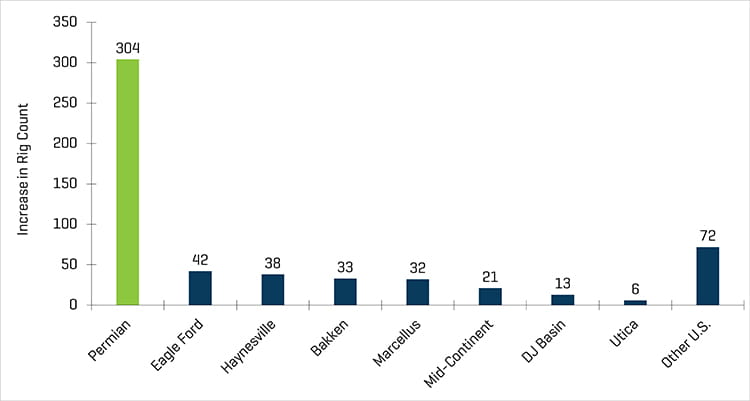 Revenue and EBITDA margins experienced mixed results by OFS sector in the first quarter of 2019. Although the overall market has rebounded year-to-date (S&P 500 rising approximately 17%) and crude prices rallied through the first quarter, Energy Equipment Manufacturers, Offshore Drilling, and Production and Well Services, experienced declines in revenue and EBITDA quarter over quarter, while Land Drilling experienced growth in revenue and EBITDA. EBITDA margins have been compressed due to higher employee costs in a tightening labor market and increased material prices. Crude prices bounced back in the first quarter of 2019, but performance is expected to remain moderated until later in the year due to the uncertainty in the market. Production levels in the U.S. and specifically from the Permian Basin are expected to grow in 2019, which should continue to support activity in the sector even if prices remain range-bound.

Public valuations for OFS companies declined during the quarter (OSX decreased 14.1%), and year over year continues to lag the overall market. From June 30, 2018, the OSX has declined 47.5% compared to the S&P 500, which was up 8.2% over the same period. The energy sector, as a whole, continues to underperform the broader market. Wall Street analysts expect energy stocks to continue to lag S&P performance throughout 2019, with investors remaining focused on a select group of quality stocks with operations in key basins such as the Permian.

Energy Equipment Manufacturers, Offshore Drilling, and Production and Well Services experienced margin contraction in the first quarter of 2019, with EBITDA declining by 9.3%, 15.6%, and 25.5%, respectively. Quarter over quarter, Land Drilling revenue grew slightly by 0.7%, and EBITDA grew by 10.1%, faring better than each of the other sectors.

M&A Activity Weakened Likely Due to Continued Volatility in 2019

Strategic acquirers were the most active acquirers of energy service and equipment businesses during the second quarter of 2019 (76% of all transactions) with private equity (PE) and PE-backed groups representing 18% of total second-quarter deals, while representing just under 25% of total transaction value.

The outlook for M&A and financing activity in the sector is likely to remain somewhat muted during the second half of 2019 due to uncertainty regarding activity levels and E&P budgets, as well as commodity price volatility and geopolitical/trade concerns.