The S&P 500 gained just 1.3% during the third quarter of 2019, while the Healthcare Services and Life Sciences equities that we track in this report under-performed during the quarter, declining -3.2%. The S&P 500 is up 18.6% year to date through the third quarter of 2019, with the mean Stout Healthcare Universe stock price up 6.2% during the same period. As one might imagine, the three healthcare sectors to outperform the market year to date are: Healthcare Information Technology; Medical Devices and Supplies; and Diagnostics, Tool, and Reagents, the sectors without the direct reimbursement exposure. As we indicated in last quarter's report, the Democratic debates have stoked the flames of healthcare reform once again, which tends to hurt the healthcare service sectors disproportionally. There are also specific areas impacted by reimbursement changes or hospitals being disenfranchised by surgeries moving to the ambulatory setting, but we think a lot of the underperformance this year is sentiment-related and probably unjustified.

As shown in the table below, healthcare expenditures seem to be tracking in line with economic growth.

There were 126 deals announced in the third quarter of 2019 representing the most in the previous 14 quarters, which seems to support continued growth in activity.

Consolidation of the Physician Practice Management sector continued to be robust with 57 deals announced/closed, in line with 59 in the year earlier quarter. This is down from 72 deals in second quarter of 2019, but still a very healthy level. Interestingly, the activity in the quarter was expected with add-ons in Ophthalmology, Dermatology, Ortho/Spine/Sports Medicine, and Dental, but we also saw transactions in GI, Pain, Emergency Medicine, Anesthesia, and Pain Management, so it was pretty widespread as private equity is consolidating the industry and adopting themes across many different sub-specialties.

Pharmaceuticals / Biotechnology realized a noticeable increase in deal flow - increasing to 62 in third quarter of 2019 compared with 53 the previous quarter and 52 in the third quarter of 2018. The deal value in this sector fell off precipitously, however, as there were no mega merger announcements or closings for deals like Abbvie-Allergan in the quarter. One transaction that caught our eye here was H. Lundbeck acquiring Alder BioPharmaceuticals, which is developing a drug for the preventative treatment of migraines. We would note that non-invasive neuromodulation device maker Cefaly Technology, has had compelling efficacy outcomes without the need for a systemic medication.

Diagnostics / Tools / Clinical Labs saw a sizable uptick in deal activity reaching 36 in third quarter of 2019 compared to 24 in the previous quarter and 26 a year ago. The most notable deal here was Exact Sciences acquiring Genomic Health.

Healthcare Information Technology saw 60 transactions in the quarter versus 36 a year ago and there are too many different sub-segments here to get granular in this report, whether it be artificial intelligence (AI) for practices, patient scheduling systems, cloud-based storage systems, electronic health records, billing systems, etc. This will continue to be an area with a high volume of activity. 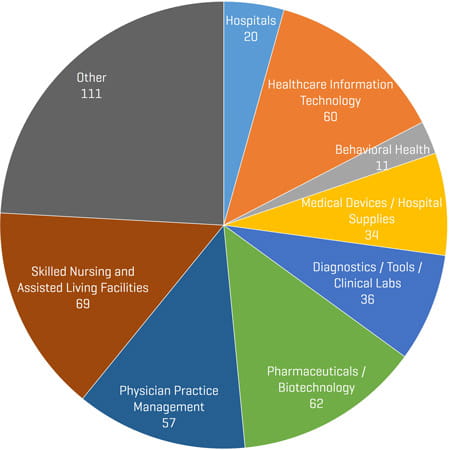 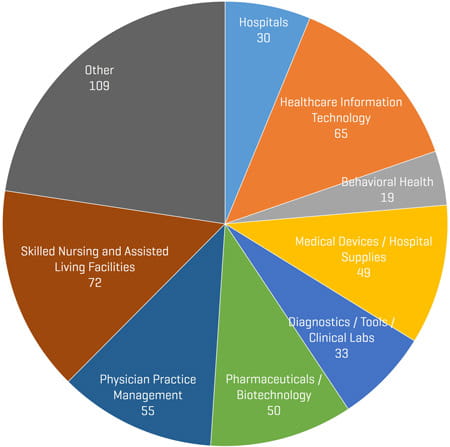 Mylan N.V. (NasdaqGS: MYL) announced its acquisition of Upjohn Inc., a manufacturer of biopharmaceutical drugs such as Lipitor and Zoloft, among others. The new combined company will generate roughly $20 billion a year in revenue.

Amgen Inc. (NasdaqGS: AMGN) announced an acquisition of the worldwide rights to Otezla from Celgene Corporation for $13.4 billion. The acquisition is contingent on the Bristol-Myers Squibb closing the pending merger with Celgene which is expected to close by the end of 2019.

Permira Advisers announced its purchase of contract development and manufacturing company Cambrex Technologies (NYSE: CBM) at $60 per share at a 47% premium. The total deal value was about $2.6 billion.

Medical Properties Trust invested in Prospect Medical Holdings, Inc. via a sale-leaseback of the company’s real estate assets in California, Connecticut, and Pennsylvania, which included hospitals and various other facilities. 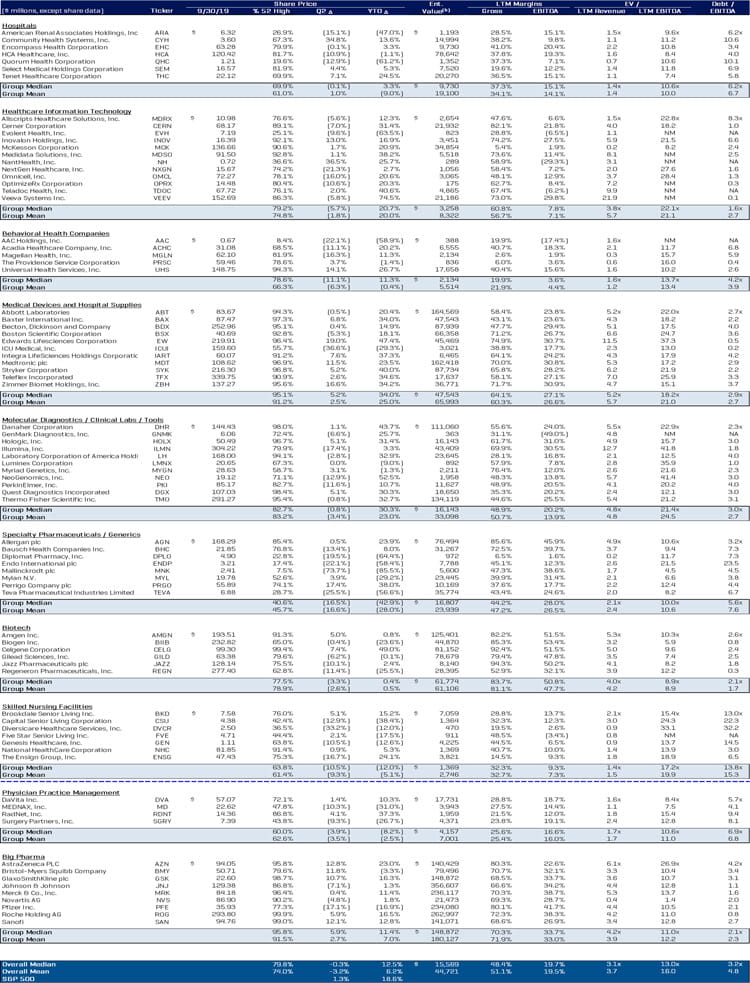