Medicare-for-All rhetoric in Democratic debates leads to second-quarter underperformance of healthcare stocks, but sector growth and M&A activity were well above market averages.

The S&P 500 gained just 3.7% during the second quarter of 2019, while the healthcare services and life sciences equities that we track in this report underperformed during the quarter, declining 1.1%. Weaker performance in healthcare was largely driven by fears about Medicare-for-All, given that it was a key topic among the Democratic presidential debates.

We would note that we have seen calls for healthcare reform in the past, including President Clinton's attempt in 1993, which was soundly defeated in Congress. We believe that the healthcare industry will survive current calls for reform as well, with an acceptable alternative model that will likely allow for continued industry growth in sales and earnings just as it has in the past. We would also note that healthcare, unlike most other sectors, is expected to report growth in sales and earnings for the remainder of this year, which should lead to outperformance when the dust settles on healthcare-reform rhetoric. Our ultimate thought is that coverage may be expanded for people that do not have coverage, but that the presently insured individuals will maintain their policies.

The standout group among the public healthcare sectors that we track was Healthcare Information Technology, which showed a 10.4% increase in the quarter. This, or course, is likely due to the fact that value-based payment systems, population health and bundled payment systems, and changing reimbursement models will keep these companies busy with new service offerings. The healthcare service segments dragged down healthcare performance with each sub-segment declining single digits. Specialty Pharmaceuticals, namely the generic drug manufacturers, took a drubbing in the second quarter, falling 20.0%. Medical Devices and Diagnostics and Tools were in line with market performance.

The U.S. market overall also experienced a fair amount of volatility during the second quarter of 2019, largely due to an escalation of trade tension between the U.S. and China, concerns about global growth slowdown, and late-stage cycle sentiment among investors.

Despite second-quarter volatility, the S&P 500 is still up 17.1% for the first half of 2019, with the mean Stout Healthcare Universe stock price up 9.1% during the same period.

Some industry publications called for a slowdown in healthcare M&A activity in 2019, but we are just not seeing it. In fact, we appear to be on track for a record year. As we indicated in our first-quarter 2019 industry update, the number of announced deals has been rising, and we see that as a leading indicator of activity. Although announced deals of 114 in the second quarter of 2019 were below the 131 from the fourth quarter of 2018, they are up substantially from 82 in the second quarter of 2018. This seems to support continued growth in activity. Private equity (PE) funds and strategic buyers continue to have a lot of money to put to work (and they are raising large new funds) and rates remain low. Barring a recession, which can inspire political sabre rattling about healthcare costs and dampen enthusiasm for the sector, we see M&A activity remaining strong.

Second-quarter 2019 M&A activity tied the first quarter's record with 482 deals announced and/or closed, representing a 48% increase from 325 in the year-earlier quarter.

Skilled Nursing and Senior Housing Community transactions (Assisted Living/Independent Living/Memory Care) once again saw a significant increase in M&A activity, inspired by the opportunity for higher returns on invested capital (higher capitalization rates versus other asset classes), low interest rates, PE funds and real estate investment trusts (REITs) having raised increasingly large pools of capital, some distressed operators selling, and sellers emerging in light of the Centers for Medicare & Medicaid Services (CMS) transition to the Patient Driven Payment Model, which could prove to be challenging for small operators and a real opportunity for larger sophisticated operators that are clever in managing acuity, referrals, and therapy utilization and costs. Larger organizations are also better able to manage through value-based payment system models, such as accountable care organizations and bundled payment systems. Larger providers also have more flexibility to expand into other segments of the continuum of care, such as home care, if they are thinking about population health management. Local/regional market share would seem to be an important factor (bigger is better), which is probably contributing to the consolidation trend (as are distressed sales.)

The reductions in length of stay have probably hit bottom for many providers and the addition of added services such as respiratory, cardiac care, or behavioral health could also lead to higher reimbursement for skilled nursing facilities (SNFs). Special incentive payment under state Medicaid programs could also be exploited as can Department of Housing and Urban Development (HUD) financing. Finally, the so-called “Silver Tsunami” of baby boomers boosting the census of skilled nursing operators and senior housing communities is also a potential meaningful growth driver.

SNF payments for fiscal year 2020 will increase 2.5%. CMS changing the definition of “group therapy,” which currently covers groups of four patients, to now allow as few as two patients to as many as six, was also a positive development that has been requested by stakeholders for several years. This change will allow SNFs to group six patients with one therapist, for example, while only paying for one therapist and getting reimbursed for six. The offset is that SNFs need to get patients with the same diagnosis and treatment to be able to take advantage of this group therapy category, and changes to resource utilization group (RUG) reimbursement rates could also have an impact. In the final assessment, providers should at least be able to reduce their number of therapy staff to offset wage increases or reimbursement pressure. The program is expected to be cost-neutral to the government.

There were 68 Skilled Nursing/Assisted Living transactions in the second quarter of 2019 versus 37 in the year-earlier quarter, representing a near doubling of activity.

Stock market performance strength among SNFs turned mixed in the second quarter of 2019 after a stronger first quarter with companies like The Ensign Group and Brookdale Senior Living performing well, while Five Star Senior Living and Genesis Healthcare did not.

Consolidation of the Physician Practice Management sector continued to be robust with 72 deals announced/closed versus 51 in the year-earlier quarter and 55 in the first quarter of 2019. Dermatology, Physical Therapy, Ophthalmology, and Dental practices led in terms of number of transactions, and most were add-ons versus new platform acquisitions. The activity was widespread across sub-specialties, however, with deals in Pain Centers, Radiology, Hospitalist Groups, Oncology Centers, and even Nephrology and Hematology, as we anticipated in our first-quarter 2019 quarterly update.

There were 47 Medical Device transactions in the second quarter of 2019 versus 36 a year ago, and EBITDA multiples in this very profitable segment of healthcare continued to rise. The average LTM enterprise value to EBITDA multiple for medical device companies was 20.6x among the public comparable companies that we track. The largest device deal in the quarter was 3M’s $6.7 billion strategic acquisition of wound care supply manufacturer Acelity, Inc.

There were a number of deals announced or completed in the quarter in interventional cardiology and radiology, including Medline Industries intent to acquire the Namic Fluid Management business from AngioDynamics for $167.5 million and Merit Medical’s announcement that it was acquiring BrightWater Medical, Inc. Boston Scientific also announced the acquisition of interventional spinal implant manufacturer VertiFlex, Inc. BSX has also closed the acquisition of interventional radiology device manufacturer BTG. AED manufacturer Cardiac Science is once again being sold, this time to Zoll Medical. Most of the deals in the medical device sector are strategic, but Cortec Group acquired Aspen Medical Products, the terms of which were not disclosed. Aspen is a leader in cervical collars and bracing systems. These lower technology categories of medical supplies or distribution is where we often see more private equity activity.

BioPharma had several of the largest transactions in the quarter, including AbbVie’s $80 billion acquisition of Allergan, which had been bumping up against patent expirations and increased competition in product categories like Botox and Restasis. Pfizer also announced the acquisition of Array Biopharma to bolster its’ oncology portfolio and pipeline. There were 53 deals in total in Pharmaceuticals and Biotechnology in this year’s second quarter versus 44 a year ago. 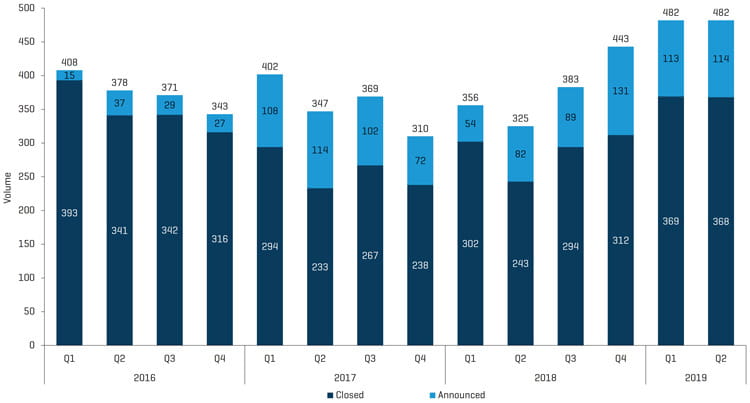 Novartis Pharmaceuticals (SWX:NOVN), a Swiss multinational pharmaceutical company, has agreed to acquire the assets associated with Xiidra, a lifitegrast ophthalmic solution previously owned by Takeda Pharmaceutical Company Limited. Xiidra is a prescription treatment for dry eye, a common inflammatory disease. The terms of the deal include an upfront payment of $3.4 billion, with potential for additional payments of up to $1.9 billion. Xiidra will be integrated into Novartis’s $4.6 billion ophthalmic pharmaceutical portfolio.

HealthEquity, Inc. (NasdaqGS:HQY), the nation’s leading health savings account (HSA) provider, announced its acquisition of WageWorks, Inc. (NYSE:WAGE), a provider of HSAs and complementary consumer-directed benefits. HealthEquity will acquire all the outstanding and issued shares of WageWorks common stock in an all-cash transaction valued at approximately $2.0 billion. Through the acquisition, HealthEquity will have greater access to the nationwide HSA market.

Vertex Pharmaceuticals Incorporated (NasdaqGS:VRTX), a global biotechnology company, plans to expand its presence in the gene editing industry through the acquisition of privately-held Exonics Therapeutics, Inc., a company focused on creating gene editing therapies to cure neuromuscular diseases. Exonics will be acquired through an upfront payment of $245 million, with potential for additional milestone payments that would raise the transaction value to approximately $1.0 billion. Exonics technology will assist Vertex in developing safe treatment options for neuromuscular diseases.

Invesque Inc. (TSX:IVQ.U), a Toronto-based healthcare real estate company, has agreed to acquire Commonwealth Senior Living, an assisted living management company based in Charlottesville, VA. The deal includes 20 private-pay senior living communities – 1 in Pennsylvania and 19 in Virginia, with a total of 1,440 units. Invesque will pay approximately $340 million to complete the transaction, increasing its real estate portfolio to a value of over $1.8 billion. 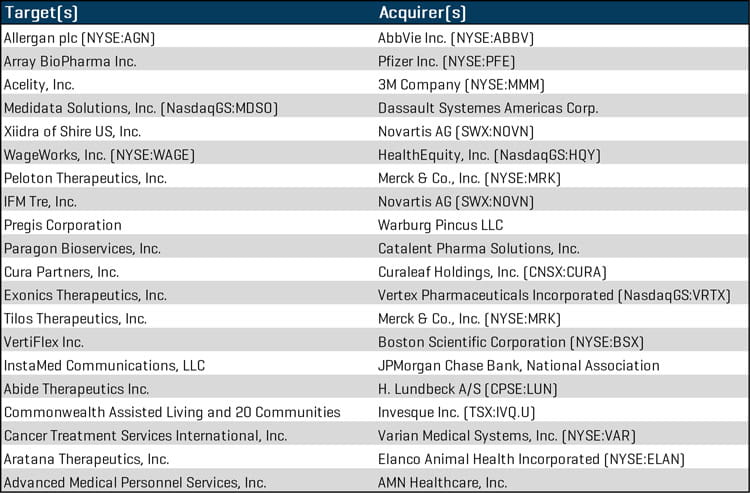 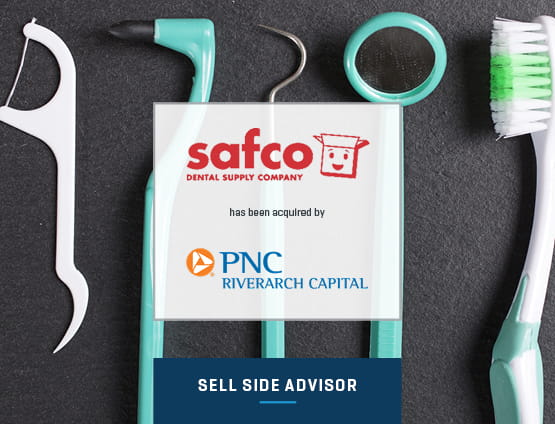