The Distressed Middle Market in 2019 and Beyond

The Distressed Middle Market in 2019 and Beyond

Despite favorable economic trends and relatively healthy M&A activity, are we approaching the next distressed cycle?

Like Vladimir and Estragon in Samuel Beckett’s famous play “Waiting for Godot,” distressed investors have spent a substantial amount of time awaiting the arrival of their own mysterious figure: the next distressed cycle. Over the past decade, this elusive Godot has failed to materialize, despite divergent theories predicting the onset of the next “cycle,” “credit apocalypse,” or “credit wall.”

In 2019, the U.S. economy logged yet another year in the longest-running economic recovery on record. Buoyed by pro-business legislation, low interest rates, and a steady stock market, 2019 was marked by modest GDP growth and a robust stock market. This favorable economic environment allowed middle market M&A transaction volume to continue its strong performance. In 2019, middle market M&A volume (transactions of $25 million to $1 billion) was approximately $374.3 billion on an annualized basis, representing a decrease from a historic high in 2018 but similar to 2017’s total (Figure 1). Deal volume in the middle market space experienced significant growth from 2015 to 2019, increasing at an annual compound rate of 6.8% on an annualized basis. 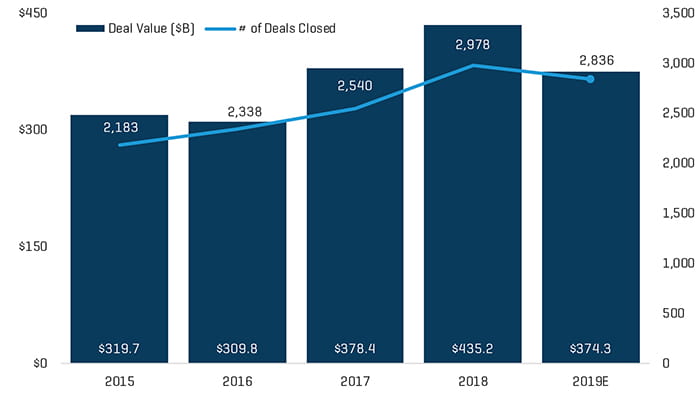 Increases in middle market deal volume were largely driven by private equity firms seeking to deploy $1.2 trillion in dry powder. Multiples for middle market companies continued their historic increase, with companies trading at an average of 12.4x in 2019, outpacing the 2018 average by a half-turn. Industries like technology and telecom continued to be the darlings of private equity firms, accounting for 24.1% of completed deals, while the energy and healthcare industries lagged behind, falling from 19.9% of completed deals on a combined basis in 2018 to 17.9% in 2019.

On an annualized basis, private equity exit count is expected to decrease from 989 in 2018 to 704 in 2019, coinciding with a decrease in total exit value from $207.7 billion to $132.7 billion over the same period (a 36.1% decrease) (Figure 2). Decreased exit activity can be attributed to private equity firms continuing to manage their recent acquisitions. The slowdown in exits is also related to sponsors integrating add-ons to their portfolio companies as a way to blend down acquisition multiples, achieve economies of scale, and improve operating efficiencies. 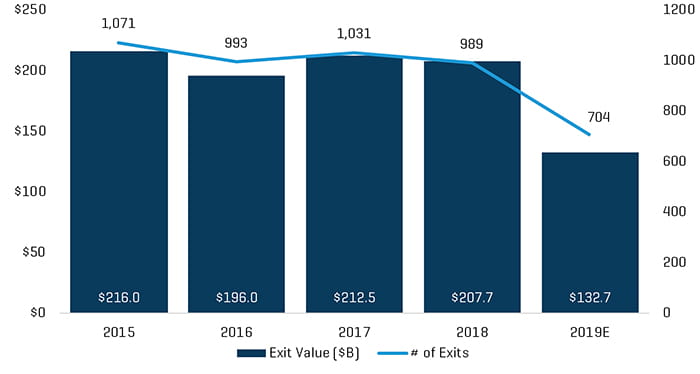 Despite these favorable economic trends and relatively healthy middle market M&A activity, there are signs that distressed investors’ own Godot may be lurking around the corner. Political, policy, and trade and tariff turbulence, coupled with an increasingly leveraged market, could be harbingers of the next distressed cycle.

Abundant capital, coupled with a continued aggressive lending environment, has fueled a historic M&A run, but has also created a high-leverage environment for middle market companies. As competition among lenders has intensified for quality credits, middle market debt deals have seen an inflow of capital from unregulated lenders seeking to fill the void with covenant-lite deals – approximately 80% of outstanding leveraged loans are constituted as such – and aggressive underwriting standards.

Although access to capital remains at an all-time high (Figure 3), there are signs lenders are beginning to brace for a potential downturn in the economy. Workout departments, which had been relatively dormant, are starting to increase their activity and are actively hiring more staff. Structurally, regulated lenders are beginning to take more defensive positions as they eschew second lien loans in favor of more conservative senior debt positions. 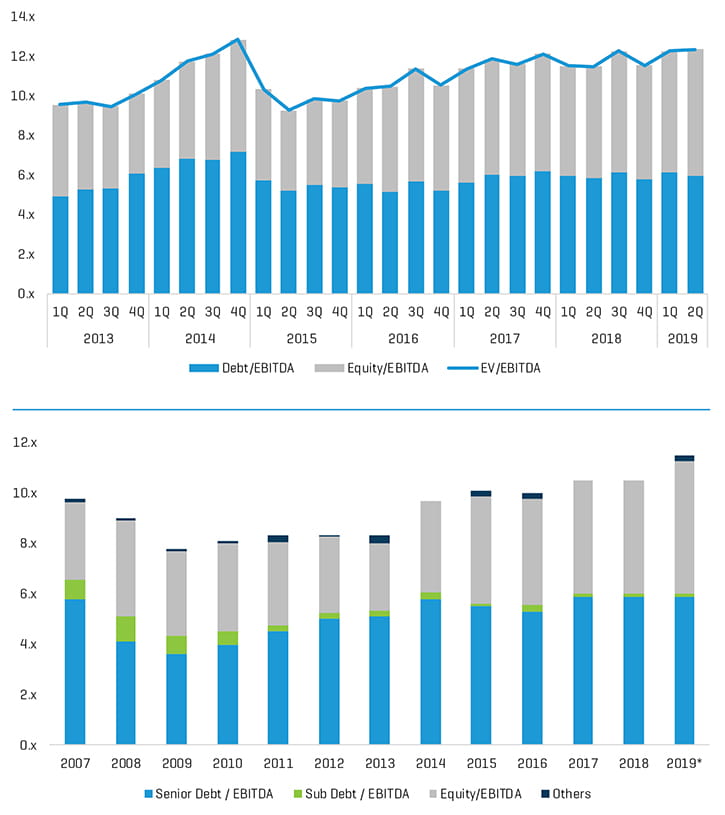 Notwithstanding a tax reduction on corporate profits and a low interest rate environment, shifting trade policy and the imposition of tariffs on certain goods weigh heavily on the minds of business owners. Net domestic business investment, a stalwart of a healthy economy, has continually decreased over the last three quarters. Middle market businesses, which tend to be more susceptible to changes in the broader economy, continue to contemplate the best strategies in response to Washington’s shifting trade policies.

For middle market business owners, drastic changes in trade legislation could force a sudden and significant overhaul of complex supply chains involving their Asian, South American, and European trading partners. Depending on the outcome of the tariff dispute, distressed investors could see targets in disparate industries like retail, food and agribusinesses, manufacturers/ suppliers, tech/telecom, and apparel, which are particularly sensitive to any supply chain disruption.

In addition to the tariff wars, the Federal Reserve’s monetary policy decisions and the 2020 election could be the tipping points that precipitate a market correction. Concerns over the tariff wars and a potential slowdown in the U.S. economy weighed heavily on the Federal Operating Market Committee (FOMC). This past year, the FOMC took an almost preemptive approach to monetary policy by lowering interest rates on three separate occasions. As of now, the FOMC is not anticipating any further rate cuts in 2020 and is taking more of a waitand- see approach to further changes.

Along with potential changes in monetary policy, the results of the 2020 U.S. presidential election will be closely monitored by distress-focused investors. The current administration’s approach to managing the economy has been decidedly pro-business in nature. While the long-term effects of current economic policy can be debated, the business community has benefited from this administration’s regulatory agenda.

Since January 2017, the Federal Register has shrunk from 97,110 pages to 68,082 in 2018. For myriad industries, deregulation has streamlined the government approval and permitting system. In addition to a less stringent regulatory environment, the current administration achieved a seminal corporate tax cut when the Tax Cuts and Jobs Acts (TCJA) was approved in 2017. The lowering of corporate taxes to 21% and related changes aligned the United States’ corporate tax structure more closely with other industrialized nations. The crop of 2020 Democratic presidential candidates’ legislative agendas could bring sweeping change to the current business environment. The leading Democratic presidential candidates have expressed their intentions to make significant changes to healthcare, trade, and environmental policies. In addition, several leading candidates have expressed their desire to rescind the TCJA.

For middle market businesses, significant changes in corporate taxes and regulation could mean higher operating costs, which could significantly impact profitability. As such, highly regulated and capital-intensive businesses could become attractive targets for distress-focused investors.

The amalgamated data certainly suggest an economy slowly marching toward a long-awaited correction. Increases in leverage, covenant-lite deals, high purchase multiples, and tariff wars all add up to the swan song distressed investors have been eager to hear. Yet, the truth is no one really knows when the next cycle is coming.

In 2020, distress-focused investors will continue to have a target rich environment for companies in the healthcare, oil & gas, and retail industries. Businesses operating in these markets continue to wrestle with redefining themselves in the midst of rapidly changing market dynamics. Since predicting the next economic downturn is an almost impossible proposition, distress-focused investors must also continue to reevaluate and redefine themselves to address the evolving investment landscape.

Given the vast amounts of dry powder, secular changes to middle market lending, and a continued low interest rate environment, the next cycle may be different from previous cycles. Instead of a deluge of bankruptcies, the next distressed cycle may be characterized by a more of a gradual correction and therefore be potentially less shocking to the overall economy.

Within the middle market, companies facing distress may continue to avoid bankruptcy in favor of out-of-court restructurings. For many companies saddled with debt and thin margins, a filing would potentially render them administratively insolvent. During the next market correction, many publicly traded lending funds may also choose to amend and extend rather than transact at divergent bid/asks that may affect their stock prices. As such, the fate of companies negatively affected by the next cycle will be decided not by the gavels of bankruptcy judges but by committees of lenders and sponsors huddled in boardrooms.

Faced with a dearth of actionable opportunities, distress-focused investors may need to look to other, less traditional avenues for deals in 2020. For operationally strong investors, corporate carveouts may be a viable alternative. Although multiples for carveouts tend to be richer than distressed deals, value creation opportunities still exist. Similar to distressed transactions, value can be created in the successful implementation of IT systems and improvements to sales and marketing departments and accounting functions.

In these deals, private equity firms involved in lending transactions could potentially become insightful partners to their borrowers on operational and financial issues. And in the event of a default, these same distressed private equity firms would also be experienced in understanding their alternatives, including a potential debt sale or takeover of the borrower.

As the new year begins, middle market distress-focused investors need to focus on the fundamentals that define their craft: patience and discipline. Barring any unexpected macroeconomic event, it will take some time for the economy to digest the impact of the tariffs and a potential change in the administration. Given the current economic situation, the beginning of the cycle or a more pronounced softening of the economy won’t likely occur until the latter half of 2020. Until that time, much like Beckett’s Estragon and Vladimir, distressed investors will have to sit under a barren tree and wait for their own Godot.

Republished with permission from the January/February 2020 issue of the Journal of Corporate Renewal, published by the Turnaround Management Association. 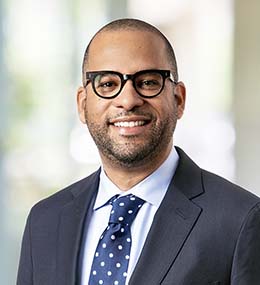 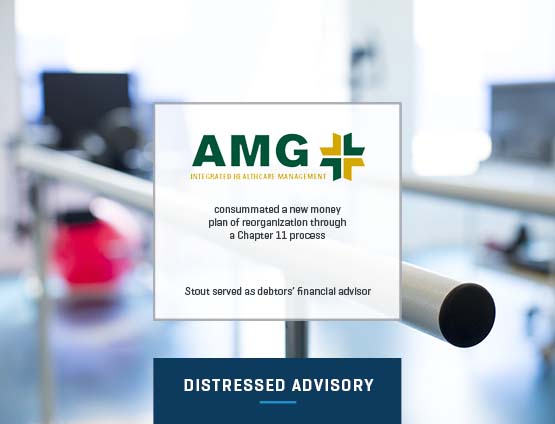