Healthcare reform dramatically changed the manner in which health systems deliver care to patients and are reimbursed for services. As hospital boards review their institution’s competitive position in a post-healthcare reform world, particularly those overseeing community hospitals, many decide to explore a sale to a strategic partner. Deciding to sell a community hospital will be the most scrutinized decision a board makes. Engaging a financial advisor to perform a valuation or fairness opinion will be a valuable exercise as the board evaluates various alternatives and defends its decision to hospital stakeholders and regulators.

Impact of Healthcare Reform on Hospitals

The passage of the Patient Protection and Affordable Care Act (“ACA”) in March 2010 meant significant change for hospitals. While the ACA provides patients with greater access to insurance, which can benefit hospitals through lower levels of uncompensated care, it also challenges these institutions to adapt to new payment models.

Traditionally, hospitals have been compensated on a fee-for-service basis which rewards the quantity of medical care and tests provided. The ACA introduced new payment models which focus on quality, such as the Hospital Value-Based Purchasing Program and the Hospital Readmissions Reduction Program. Under these new programs, hospitals are rewarded with increased reimbursement for achieving certain quality metrics and penalized with lower reimbursement for negative outcomes (e.g., excess patient readmissions). Funding for value-based purchasing is generated by withholding a percentage of Medicare payments.1,2

Alternative payment models such as Accountable Care Organizations (“ACOs”) and bundled payment arrangements are another cornerstone of health reform. ACOs involve collaboration between hospitals and physicians to improve the quality of care for a population of patients while reducing costs. Participants in these alternative payment models can benefit financially by sharing in resulting savings. Thriving in an environment of value-based and alternative payment models requires hospitals to make significant investment in data analytics and technology – most prominently costly electronic health record (“EHR”) systems. Large health systems have the expertise and capital to make these investments, while community hospitals often lack these resources and may struggle to remain competitive.

The challenges and costs of healthcare reform, coupled with maintaining aging facilities, declining reimbursement, rising wages, and the shift of care from an inpatient (hospital) setting to a lower cost outpatient setting can create financial distress for many community hospitals. As distressed hospitals face these headwinds, many determine that a sale to a larger health system is an attractive option. 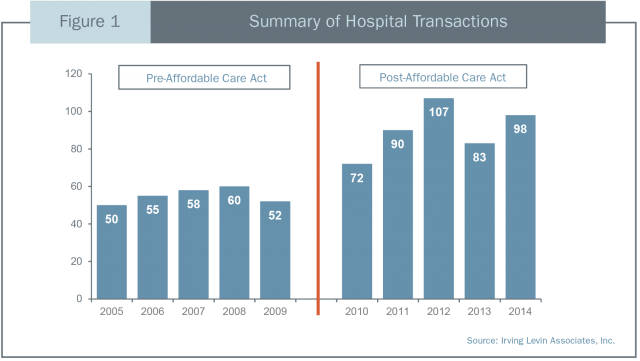 As data from Irving Levin demonstrates in Figure 1, hospital transactions have increased substantially since the ACA was passed into law. A sale to a larger health system or for-profit hospital operator can provide a range of benefits to a community hospital including: access to capital markets to fund necessary investments in facilities and technology, greater negotiating power with payors and vendors, additional clinical expertise, and the resources to recruit new physicians to the community.

Hospitals play an important role in local economies and are often one of the largest employers in the communities they serve. The decision to sell a distressed community hospital can be a politically charged event that will be heavily scrutinized by stakeholders, the local business community, regulatory authorities, and creditors. There will be significant pressure on the board to defend its decision process and to “get it right.” When a board begins contemplating a sale, it should retain experienced legal counsel and an investment banker to assist it in evaluating strategic options. Separately engaging an independent financial advisor to perform a valuation of the hospital early in this process can be another valuable tool as the board explores its options.

Benefits of a Hospital Valuation

Duties of the Board

Nonprofit board members are fiduciaries of a hospital and are entrusted with the oversight of its charitable mission. Specific duties of the board include:

In most states, the state attorney general (“AG”) has the authority to review and approve transactions involving charitable assets. State AGs are becoming increasingly active in their reviews, particularly in hospital transactions involving a nonprofit seller and a for-profit buyer. State AGs and other regulators are primarily concerned that: 1) the board performs its fiduciary duty in evaluating the transaction and any possible alternatives; and 2) the transaction is in the interest of the community. The preservation of the availability of healthcare services in the community and ensuring that the converting nonprofit receives at least Fair Market Value for its charitable assets are often focus areas of an AG review.4

Valuations performed for hospital boards contemplating strategic alternatives are often performed under a Fair Market Value standard. Fair Market Value is commonly defined as “the price at which property would change hands between a willing buyer and a willing seller, when the former is not under any compulsion to buy and the latter is not under any compulsion to sell, both parties having reasonable knowledge of the relevant facts.”5 Fair Market Value is commonly described as representing an arm’s-length price, negotiated without undue stress, and excludes consideration of any buyer-specific synergies.

Most board members lack experience with hospital transactions. Accordingly, it is common practice, and good business sense, for a board to engage a financial advisor to perform a valuation to better inform itself as it decides between strategic options including the evaluation of potential purchase offers. Boards may also commission a fairness opinion to help it further evaluate a proposed transaction prior to a board vote. Valuations and fairness opinions help the hospital board demonstrate to the State AG that it has met its Duty of Care and received Fair Market Value for the sale of charitable assets.

In situations in which the hospital may be insolvent at the time of sale or may become insolvent as a result of the transaction, creditors may request that a trustee pursue claims that the transaction represented a constructively fraudulent transfer. Section 548(a)(1)(B) of the Bankruptcy Code, which deals with constructively fraudulent transfers, allows a trustee to void property transfers made by the debtor, within two years of the filing, if the debtor: 1) “received less than reasonably equivalent value” in exchange for the transfer; and 2) was insolvent on the date of transfer or became insolvent as a result of the transfer.6

In distressed hospital transactions, both the buyer and seller run the risk of having a transaction voided if a constructively fraudulent transfer claim is upheld. In many circumstances, a contemporaneously prepared Fair Market Value opinion can help the parties to the transaction demonstrate that the sales price represented adequate consideration at the time of the transaction, as well as assist in demonstrating that reasonably equivalent value was exchanged by the parties.

What is a Valuation?

A valuation is an independent and unbiased opinion of an asset’s value presented either as a point estimate or a range. Hospital valuations should consider the three principle approaches to valuation: 1) the Income Approach; 2) the Market Approach; and 3) the Asset Approach. Determining the valuation approach or combination of approaches most appropriate for a hospital is facts and circumstances dependent, but generally hinges on a hospital’s ability to generate positive future cash flows from operations. The Income and Market Approaches are commonly used to value hospitals expected to continue as cash-flow producing going-concerns. When hospitals are expecting to sustain losses or when the application of the Income or Market Approach results in a value below the value of a hospital’s net assets, the Asset Approach may be most appropriate.

The Income Approach is based on the financial theory that a hospital’s value is equal to the present value of its anticipated future earnings. There are two common forms of the Income Approach: 1) single-period capitalization; and 2) multiple period discounting. The Discounted Cash Flow Method (“DCF”), a multiple period discounting model, is commonly used in hospital valuations because it provides the flexibility to explicitly incorporate expected changes in financial performance.

To perform a DCF analysis, a financial advisor will work with hospital executives to independently develop a multi-year cash flow projection that reflects changes in reimbursement, patient volumes, expense ratios, as well as necessary capital investments and changes in working capital. The financial advisor will develop a risk-adjusted rate of return to calculate the present value of the projected cash flows. The board should review management’s forecast to ensure that it reflects the best available information at the time and the financial results can reasonably be attained. A valuation based on “hockey stick” projections is diminished in its usefulness as a tool to evaluate proposed transactions.

Many incorrectly believe that a hospital’s value can be determined by blindly applying an average market multiple. Without further analysis, this simplistic approach will likely result in a distorted estimate of value. The publicly-traded hospitals identified in Figure 2 operate dozens to hundreds of hospitals in different regions and markets, can access capital markets to fund growth, and have the economies of scale to produce strong profit margins. Investors are typically willing to pay a premium for these advantages.

Figures 3 and 4 present revenue multiples for hospitals acquired between 2012 and 2014 segmented by size and earnings before interest, taxes, depreciation and amortization (“EBITDA”) margin. As this chart demonstrates, all else being equal, investors will typically pay higher multiples for larger, well-diversified hospitals than for smaller community hospitals. Similarly, investors will pay a higher revenue multiple for hospitals with greater profit margins. An experienced financial advisor will analyze the risk and growth profile of the hospital relative to the market comparables and adjust the valuation multiple that is being applied as appropriate.

For severely distressed hospitals, the Income and Market Approaches can result in a valuation below the net value of the hospital’s tangible and working capital assets. In these circumstances, the value of the hospital is equal to the Fair Market Value of its component assets, net of the value of its liabilities. When the Asset Approach is applied, tangible asset appraisers may be retained as real estate and medical equipment are typically the hospital’s most significant assets.

One or a combination of the three valuation approaches may be applied in a hospital valuation. When multiple methods are applied, the financial advisor will assess the relative strengths and weaknesses of each approach and conclude on a point estimate of value or a range.

A Fair Market Value opinion can be a critical exercise prior to the board initiating a sales process or during its evaluation of offers from potential acquirers. Because a fairness opinion involves the review of a specific transaction, these analyses are usually limited to situations in which the board has narrowed a sales process to a primary buyer. Whether the board determines that it wants to commission a valuation, fairness opinion, or both, it is crucial that the financial advisor hired is independent with regards to the transaction. While it is common for the board’s investment banker to provide a fairness opinions on a deal that they helped to negotiate, their independence may come into question if they earn a success fee upon closing. Hiring an independent financial advisor in addition to an investment banker may provide an extra level of transparency and protection.

The pressures of healthcare reform are expected to continue to encourage consolidation among community hospitals for the foreseeable future. The decision to sell a hospital will be one that is controversial and heavily scrutinized by regulators and stakeholders. Along with hiring an experienced healthcare deal attorney and investment banker, engaging a financial advisor to perform an independent valuation or fairness opinion will aid the board in defending its decision and demonstrate that it has met its fiduciary duties.

This article was previously published in the Journal of Corporate Renewal and the American Healthcare Lawyer’s Association’s Healthcare Transactions Guide. 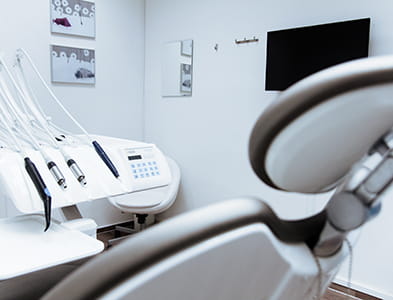