The so-called Panduit test, and the modifications set forth in subsequent decisions, such as BIC Leisure, Inc. v. Windsurfing International (1993) and Rite-Hite Corp. v. Kelley Co. (1995), have provided a fairly stable set of criteria for lost profits entitlement relative to the more unsettled topic of reasonable royalty damages quantification. In recent years, for example, courts have subjected to closer scrutiny the degree and accuracy of apportionment in arriving at a reasonable royalty damages conclusion.[1] The extent to which this emphasis on apportionment has a bearing on lost profits damages has remained, for some, an open question.

On March 16, 2017, the Court of Appeals for the Federal Circuit (“Federal Circuit”) issued a decision in Mentor Graphics Corp. v. EVE-USA, Inc. and Synopsys Emulation and Verification S.A.S. (“Mentor”), providing further clarity on the proper application of apportionment in lost profits approaches. Specifically, the Federal Circuit ruled that if a party properly applies and fully satisfies the requirements of the Panduit test, then the scope of the quantified lost profits already reflects only the profit directly attributable to the patents-in-suit. Thus, in such an instance, no further apportionment is necessary.

Although not explicitly required in demonstrating “but for” causation, the Panduit test first articulated by the Sixth Circuit Court of Appeals has been established as the most common framework in determining whether profits have been lost as a result of a patent infringement allegation.[2] The Panduit test requires a plaintiff to establish the following:

In addition to instituting the Panduit test, the Federal Circuit has established that there must be “a causal relation between the infringement and [a patentee’s] lost profits”[3] and that “lost profits must be tied to the intrinsic value of the patented feature."[4] It has further held that “demand for the entire apparatus is, in most circumstances, not interchangeable with demand for a patented component of the larger apparatus."[5]

Although the Federal Circuit has established the requirements for tying lost profits to the infringement, it has historically remained silent on the issue of apportionment as it applies to lost profits. On the other hand, a number of recent decisions have impacted the manner in which reasonable royalty damages are quantified as they relate to the apportionment of value to the patented feature. For example, in the VirnetX, Inc. v. Cisco Systems, Inc. (“VirnetX”) decision, the Federal Circuit stated that “no matter what the form of the royalty, a patentee must take care to seek only those damages attributable to the infringing features."[6] The Mentor decision is the first Federal Circuit decision since VirnetX to provide some insight into the court’s position on the applicability of apportionment to lost profits damages.

The patents at issue in this litigation involve debugging technology for simulation/emulation software products. Mentor Graphics (“Mentor”) claims to practice the patents-in-suit through the sale of its Veloce emulators. Mentor asserted that Synopsys Emulation and Verification (“Synopsys”) infringed the patents-in-suit through its ZeBu emulators.[7] The relevant market in this case was composed of only two suppliers (i.e., the parties to the litigation) and one major customer, Intel.

In 2006, the inventors of the patents-in-suit left Mentor to found EVE-USA (“EVE”). Mentor subsequently sued EVE for infringement of the patents-in-suit, and the parties reached a settlement agreement that included a forward-going license. When Synopsys acquired EVE in 2012, the patent license terminated per the terms of the agreement. Synopsys and EVE filed a declaratory judgment action seeking a declaration that the patents that were the subject of the license were invalid and not infringed. Mentor subsequently filed counterclaims for willful infringement of those three patents as well as additional Mentor patents.

In district court, Mentor argued that it was entitled to lost profits, which it quantified using the traditional Panduit framework. It succeeded in this claim and was awarded approximately $36 million in damages. The defendants appealed this ruling, arguing that Mentor should have further apportioned its lost profits conclusion to isolate the profits attributable to the patentee’s invention.

Defendants Synopsys and EVE argued on appeal that further apportionment was required in order to properly quantify the lost profits directly attributable to the patents-in-suit, stating, “Principles of apportionment play an especially vital role in this age of complex, multicomponent electronic devices.”

Synopsys cited Supreme Court cases discussing apportionment in reference to disgorgement of the defendant’s profits and the patentee’s damages, including Garretson v. Clark, 111 U.S. 120, 121 (1884); Dowagiac Manufacturing Co. v. Minnesota Moline Plow Co., 235 U.S. 641, 646 (1915); and Seymour v. McCormick, 57 U.S. 480, 487 (1853). Specifically, Synopsys argued that there should be a two-step process for calculating lost profits: 1) determining the amount of profits lost using the Panduit test, and 2) apportioning the calculated lost profits to cover only the patentee’s inventive contribution to the product.

Mentor responded to the defendants’ appeal by reasserting that under Panduit, it was entitled to obtain lost profits damages in the amount of the entire per-unit profit because EVE’s emulators would not have been sold without the technology covered in the patents-in-suit. Referring to Panduit, Mentor argued that there were no substitutes that Intel would have found acceptable without infringing the patents-in-suit.

The Federal Circuit agreed with Synopsys’ general notion that apportionment is relevant in intellectual property infringement cases for lost profits. The Federal Circuit cited Livesay Window Co. v. Livesay Industries, Inc., as support for treating lost profits in a patent case in the same manner as other acts of harm, stating, “To allow a patent owner to recover lost profits from an infringer is no unique treatment of this one type of wrongdoing, and [it] is essentially the same problem… [as] an interference with a valuable business right."[8] 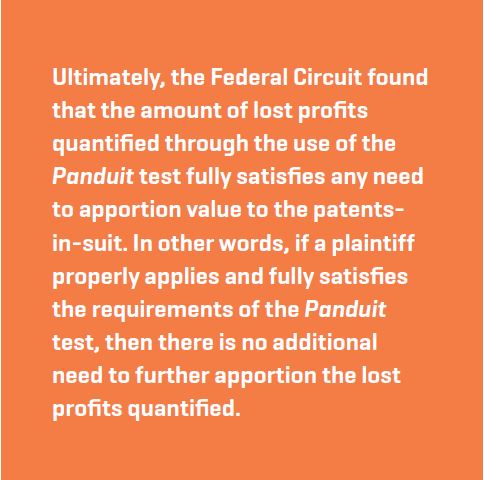 Importantly, however, Synopsys did not challenge the jury’s conclusion that Mentor satisfied the Panduit test and would have earned all of Synopsys’ sales but for the infringement. Thus, the scope of the appeal was limited to the concept of apportionment of lost profits to only those attributable to the patented invention.

Ultimately, the Federal Circuit found that the amount of lost profits quantified through the use of the Panduit test fully satisfies any need to apportion value to the patents-in-suit. In other words, if a plaintiff properly applies and fully satisfies the requirements of the Panduit test, then there is no additional need to further apportion the lost profits quantified. In essence, the proper application of the Panduit test should sufficiently narrow the quantification of lost profits to a figure that attributes profits directly to technology covered by the patents-in-suit. The Federal Circuit compared the standard to that of tort law, meant to put a plaintiff in the position it would have been in but for the actual damages suffered. The decision states, citing Aro Manufacturing Co., 377 U.S. at 507, “The ‘but for’ damages a patentee must establish in patent law, as the Supreme Court explained, are an answer to a simply stated question: ‘Had the infringer not infringed, what would the Patent Holder-Licensee have made?’”

In particular, the Federal Circuit explained that the relationship between the first two Panduit factors sufficiently allowed for Mentor to claim the profits on all accused sales. The first Panduit factor, demand for the patented product, in combination with the second, the absence of acceptable noninfringing substitutes, “ties lost profit damages to specific claim limitations and ensures that damages are commensurate with the value of the patented features.[9]

Given the limited scope of the relevant market in which Mentor and Synopsys exclusively competed for emulator sales to Intel, the key requirement for satisfying Panduit was for Mentor to establish that without Synopsys’ ability to offer the patented features in its products, Intel would have purchased from Mentor. In other words, the patented features were important to the accused products such that customers would not purchase the product without those features. As noted by the Federal Circuit, “Synopsys could have made its emulator system minus the two infringing features – that would have been an alternative to the ‘Synopsys infringing emulation system.’” Synopsys even argued that its emulators “outperform Mentor’s in price, size, speed, and capacity.”

However, as Synopsys did not appeal the jury’s findings related to Panduit factors, the court concluded that Synopsys “is left with a jury fact finding that Intel would not have bought Synopsys’ emulation system without the two infringing features, and Mentor would have made every single sale to Intel that Synopsys otherwise made.”

Based on Synopsys’ failure to appeal the jury’s fact findings related to damages, the court very narrowly considered the necessity of apportioning after Panduit has been met. It found that “on the undisputed facts of this record, satisfaction of the Panduit factors satisfies principles of apportionment: Mentor’s damages are tied to the worth of its patented features.”

In the instant case, Mentor was the only competitor that could sell Intel a product with all of the features it required. However, the court recognized that lost profits may not be available for complex, multicomponent products in which multiple features are demanded by a customer. It stated, “With such multicomponent products, it may often be the case that no one patentee can obtain lost profits on the overall product – the Panduit test is a demanding one. A patentee cannot obtain lost profits unless it and only it could have made the sale – there are no noninfringing alternatives or, put different[ly], the customer would not have purchased the product without the infringing feature.”

While this language is not inconsistent with the Federal Circuit’s previous decisions, it does demonstrate the difficulty associated with satisfying the Panduit test under certain facts and circumstances, potentially including matters dealing with products that offer a plethora of patented components or features, all of which may impact a customer’s purchasing decision. 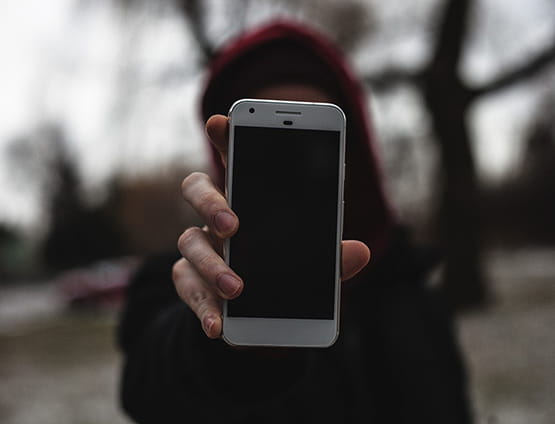 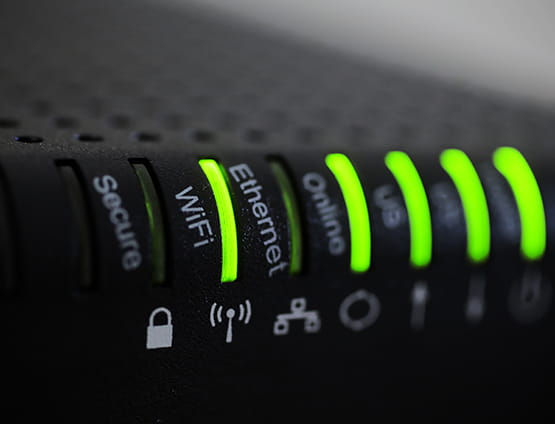