With Brexit now official, what does the future hold for M&A activity in the United Kingdom?

Following an emphatic December 2019 election win by the Conservative Prime Minister Boris Johnson, the UK government will follow the advice of Groucho Marx and resign from the EU27 Club after 47 years, “as he didn’t want to belong to any club that would have him as a member."

With a commanding majority of 80 members of parliament, the government implemented the Withdrawal Agreement – whose passing was thwarted several times over the previous year by a remain-leaning Parliament – on January 31, 2020, otherwise known as Brexit Day. By the end of December 2020, a free trade agreement is to be negotiated to govern the trading arrangements between the United Kingdom and European Union. The standstill transition arrangements expire on December 31, 2020, but can be extended, if necessary. Moreover, as an independent trading nation outside of the EU customs union, the UK will be able to forge free trade deals with countries across the world, with an agreement with the US, in particular, announced as a priority by both countries’ leaders.

UK markets are higher on a clear and decisive win, with both currency and stock markets in positive territory, which reflects a welcome end to the parliamentary deadlock. Clarity on the UK/EU relationship should unlock pent-up demand for investment from businesses. The reversal of a decade of fiscal consolidation should provide a fillip to domestic demand. In addition, there will be a large fiscal boost coming with promised increases in spending by the incoming government, including billions of pounds on infrastructure. This will assist in driving business confidence, unlocking private investment capital, as well. The Bank of England believes that there will be a rebound in UK growth in 2020 and has left interest rates unchanged. The International Monetary Fund also forecasts that UK growth will again outperform the eurozone in 2020 and 2021.

Overseas investors are now expected to buy back into UK assets after the relief that the far left election manifest of the opposition Labour party was resoundingly rejected by the British public. Now that the specter of politics and, more significantly, a "hard" Brexit has disappeared, UK PLC looks undervalued relative to other markets – at a 30% discount to global peers according to Schroders – and this institutional underweight should correct during 2020. 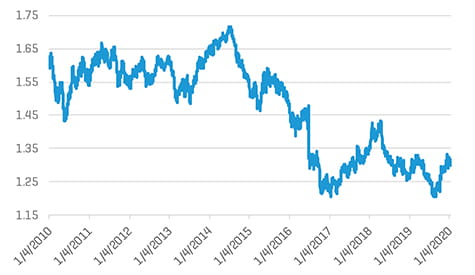 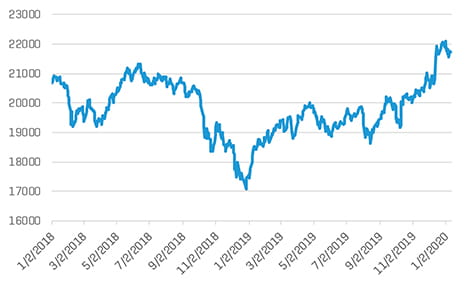 A clear decision on Brexit should be very beneficial to corporate confidence and unleash the animal spirits that have been dormant in the UK in recent times. The Brexit cloud has hovered for three years over UK merger and acquisition (M&A) activity, and, in 2019, several high-profile, multi-billion-dollar deals were pulled because of the politics. The election result should provide a welcome boost to deal making particularly in small and mid-cap sectors, which tend to be more UK-orientated, and a drive to get deals done as buyer confidence recovers.

Private equity (PE) expects a boost to deal making as pricing confidence recovers and holding periods become more extended. PE exits were down by 41% in 2019 year over year, with the £6.3 billion total exit value nearly half that of the previous low in 2011 because of Brexit uncertainty impacting buyer confidence. According to a survey of PE groups by Imperial College London, the current sentiment is extremely bullish on UK assets.

The UK is the fourth most important nation for business growth plans behind only the US, China, and Germany, according to a PwC report launched in January this year at the World Economic Forum in Davos. Kevin Ellis, chairman of PwC UK, said: “The findings provide timely perspective on the UK’s standing as a place to invest and do business. Viewed against the turbulent global backdrop, the UK is a beacon of relative stability.”

With the anticipated surge in deal making during 2020, there will be attractive opportunities for corporate and PE investment. For international investors, the attractive exchange rate offers additional value and risk mitigation, with the pound still trading below long-term averages against the US dollar and the euro. With renewed political stability, a stable open economy, English language, and a business-friendly environment, the UK is seen by investors as a core focus area in the next 12 months.

Politics is rather like the weather, and no doubt there may be squalls ahead. But uncertainty has been removed and the direction of travel is clear. Despite the politics and the posturing, the EU27 remains the UK’s largest economic trading partner, and the economic facts remain the same. The UK as an island nation may have reclaimed its political sovereignty, but as a trading nation since Elizabethan times we have always been completely pragmatic in wealth creation, especially with our Continental friends. Who knows, in 47 years we may be back in the Club? What would Groucho say?!

Stout’s London office is ready to discuss UK acquisition strategies with investors and advise on how investment opportunities can best be realized. 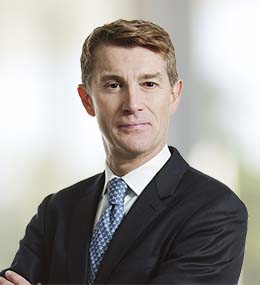