There has been much interest and discussion recently regarding large recalls, completion rates, fines and congressional testimony. NHTSA’s public actions and comments have indicated a greater degree of resources dedicated to scrutinizing OEM compliance with recall reporting and completion. In this post, we analyze the data NHTSA provides regarding official inquiries made to OEMs.

NHTSA classifies these inquiries into a variety of categories. In this post we will be analyzing the data for the three most common queries NHTSA initiates:

Queries of this type are contemplated by and provided for under U.S. Code › Title 49 › Subtitle VI › Part A › Chapter 301 › Subchapter IV › § 30166 - Inspections, investigations, and records

(e) Records and Making Reports. — The Secretary of Transportation reasonably may require a manufacturer of a motor vehicle or motor vehicle equipment to keep records, and a manufacturer, distributor, or dealer to make reports, to enable the Secretary to decide whether the manufacturer, distributor, or dealer has complied or is complying with this chapter or a regulation prescribed or order issued under this chapter. This subsection does not impose a recordkeeping requirement on a distributor or dealer in addition to those imposed under subsection (f) of this section and section 30117 (b) of this title or a regulation prescribed or order issued under subsection (f) or section 30117 (b).

(1) In carrying out this chapter, the Secretary of Transportation may—

(B) conduct hearings, administer oaths, take testimony, and require (by subpena or otherwise) the appearance and testimony of witnesses and the production of records the Secretary considers advisable.

On July 31, 2015, NHTSA opened an EQ regarding “a software security vulnerability discovered in radios produced by Harman International Industries Inc. that led to a 1.4 million Fiat Chrysler vehicle recall in late July has affected other manufacturers.”[2] NHTSA noted “This [equipment query] is being opened to obtain information from the supplier of Chrysler Uconnect units to determine the nature and extent of similarities in other infotainment products provided to other vehicle manufacturers. If sufficient similarities exist, the investigation will examine if there is cause for concern that security issues exist in other Harman Kardon products.”[3]

In another recent example an AQ was opened by NHTSA in October 2014 related to the widely-reported failure of Honda to report complete EWR data. NHTSA noted: “This audit query (AQ) investigation is being opened in order to investigate the extent and scope of Honda's reporting failures, as well as the reason(s) for such failures and the steps being taken by Honda to assure full compliance with TREAD reporting requirements.”

With all of the talk these days about recall completion rates and effectiveness, one would expect these queries to be increasingly prevalent. In the research SRR regularly conducts regarding automotive warranty and recall issues, it has developed a database of ODI investigations including information on a variety of NHTSA queries.

Our research has indicated that since 2000, there have been 77 AQ, EQ or RQs opened by NHTSA related to primary light vehicle makes and models.[4] Of those, 67 were RQs. Several other interesting observations are evident in the research, including, but not limited to: 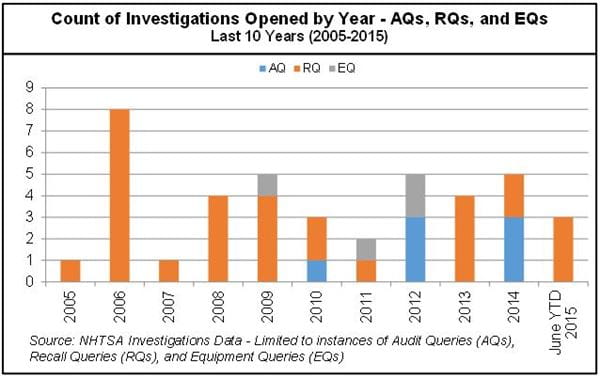 It appears that NHTSA is increasingly exercising its ability to request additional information on recall completion and effectiveness. The recent trend of greater numbers of AQ’s and RQ’s in particular indicate that NHTSA is taking proactive measures to gather information about recall completion rates. This is consistent with NHTSA’s public comments regarding its concerns around completion rates. However, AQ’s and RQ’s are still exceedingly infrequent. With hundreds of recalls occurring each year, many with comparatively low completion rates, NHTSA has only opened 7 AQ’s in the last 5 years. It will be interesting to see whether NHTSA continues to exercise this authority to a greater degree as it pursues higher completion rates.

Neil Steinkamp is a Managing Director at SRR. He has extensive experience providing a broad range of business and financial advice to corporate executives, risk managers, in-house counsel and trial lawyers. Steinkamp has provided consulting services and has been engaged for several years as an expert in numerous matters involving automotive warranty and recall costs. His practice also includes consulting services for automotive OEMs, suppliers and their advisors regarding valuation, transactions and disputes.  Mr. Steinkamp can be reached at +1.646.807.4229 or nsteinkamp@srr.com.