For business purposes, it has become increasingly prevalent for companies to utilize more complex business structures including ones in which the corporate entity with legal ownership of a company’s patents is not necessarily the same entity manufacturing and/or selling the products that use the technology taught by those patents. As a result of such ownership structures, the Federal Circuit has found that the lost profits of the corporate entity selling the patented product may not be available to the corporate entity with legal ownership of the patent. In Warsaw v. NuVasive, the Federal Circuit provided further guidance regarding the availability of lost profits with direction as to whether the entity owning the patent can claim lost profits as measured by the lost royalties or other payments it would have received from the related patent practicing entity.

In 2008, Warsaw Orthopedic (“Warsaw”) filed suit against NuVasive, Inc. (“NuVasive”) in the Southern District of California for infringement of a number of patents including: U.S. Patent Nos. 5,860,973 (“the ‘973 patent”) and 6,945,933 (“the ‘933 patent”). The ‘973 patent relates to oversized spinal implants while the ‘933 patent relates to methods and devices for retracting tissue for minimally invasive spinal surgery. NuVasive countersued, claiming Warsaw, and its related company Medtronic Sofamor Danek USA, Inc. (“MSD”), were infringing three of its U.S. Patents including 7,470,236 (“the ‘236 patent”), which pertained to a method for detecting the presence of a nerve. The case was tried and the jury found infringement of all three patents.1 Damages were awarded for past infringement. With regard to the ‘973 and ‘933 patents, the jury awarded Warsaw approximately $101 million for “Lost Profit Damages (with royalty remainder)” and provided royalty rates for each patent. From the verdict form, it was impossible to distinguish the damages amount attributable to lost profits from the amount attributable to a reasonable royalty.

After trial, Warsaw sought supplemental damages, a permanent injunction, and a motion for judgment as a matter of law (“JMOL”) or a new trial with respect to its infringement of NuVasive’s ‘236 patent. Likewise, NuVasive challenged the jury’s finding of validity of the ‘973 patent, infringement of the ‘933 patent, and Warsaw’s entitlement to lost profits for both of its patents. Judge Cathy Ann Bencivengo denied all motions and set ongoing royalty rates with respect to the ‘973 and ‘933 patents. 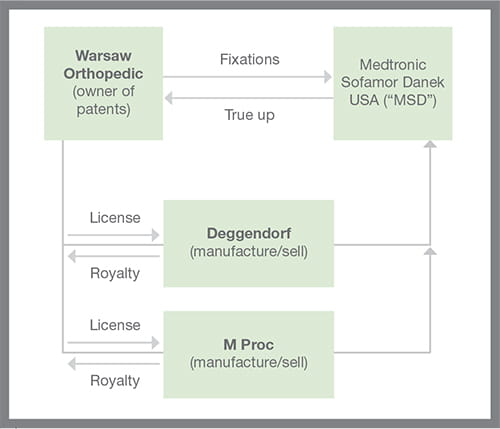 Based on its business model, Warsaw claimed it had three sources of income related to its patented technologies: 1) fixation revenue; 2) royalties received from Deggendorf and M Proc; and 3) an inter-company payment from MSD, which Warsaw characterized as a “true-up” payment. Warsaw claimed at trial that all three sources represent its potential lost profits, and sought to recover both lost profits and reasonable royalties due to NuVasive’s infringement. The jury awarded over $101 million to Warsaw for “Lost Profit Damages (with royalty remainder)” and included royalty rates for each patent.2

NuVasive’s appeal to the Federal Circuit challenged the inclusion of Warsaw’s fixation products in the district court’s lost profits damages award. In order to claim lost profits for convoyed sales, the patentee must prove that the non-patented components are “functionally related to the patented product and losses must be reasonably foreseeable.”3 Warsaw claimed that because its fixation products were part of a comprehensive medical kit, they should properly be considered in a calculation of lost profits.

However, based on Rite-Hite, a previous Federal Circuit opinion, products that are merely sold with an infringing device as a “matter of convenience or business advantage” do not prove a functional relationship. Therefore, the Federal Circuit found that Warsaw had not proved that a functional relationship existed between the fixations and the accused products, stating, “Warsaw never presented testimony that the fixations it sold to MSD had no independent function — that is, that they would not work as well in other surgeries not involving the patented technologies.” Having found that a functional relationship was not established, the Federal Circuit concluded that lost profits on convoyed sales were not appropriate and therefore ruled that the district court erred in denying NuVasive’s JMOL motion on this issue.

The Federal Circuit did not find Warsaw’s arguments compelling. “To be entitled to lost profits…the lost profits must come from the lost sales of a product or service the patentee itself was selling…the patentee needs to have been selling some item, the profits of which have been lost due to infringing sales…”7 Although Warsaw also contended that it was making the sales, and Deggendorf and M Proc were merely Warsaw’s contractual agents, the court did not find the evidence supported this characterization. Therefore, the Federal Circuit ruled that the royalty payments were not recoverable as lost profits and reversed this portion of the award. The opinion, however, did not indicate whether Warsaw’s argument would have been persuasive enough to allow for the collection of lost profits if it had been shown that Deggendorf and M Proc were simply acting as its contractual agents.

Damages Related to the True-Up Payment

At trial, Warsaw indicated that the initial compensation it received throughout the year from related parties did not necessarily reflect Fair Market Value. Therefore, for tax purposes, a transfer pricing agreement required funds to be transferred between the parties (the true-up payment) to ensure adequate compensation for the Fair Market Value of the property previously exchanged.

NuVasive challenged the inclusion of the true-up payment from MSD to Warsaw in the award for lost profits.

The true-up payments remitted by MSD amounted to approximately 95% of the profits MSD generated from the sale of products embodying the patented technologies. As such, it reflected the majority of the total lost profits requested by Warsaw. Certain evidence indicated that some portion of the true-up payment related to royalty payments, suggesting an implied royalty between MSD and Warsaw. Other evidence suggested that management fees and implied licenses regarding other patents were also reflected in the true-up payments.

Given the elimination of lost profits as an appropriate measure of damage (for Warsaw) and given the jury verdict, which did not distinguish between lost profit and reasonable royalty damages, the Federal Circuit remanded the case back to the district court for a new trial to determine the “reasonable royalty sufficient to compensate [Warsaw] for the value of what was taken from it — the value of the patented technology.”8