India’s economy has come a long way from being a pro socialist economy from the mid-20th century to a more liberalized free market economy at the end of the 20th century. Along the way, India’s regulatory framework has also undergone several structural changes and has emerged as a robust structure in recent times. On account of change in the Central Government, presently India stands on the brink of adding another chapter to its growth story and in the process is constantly amending/updating its regulatory framework. This article highlights in brief the valuation guidelines in India from a regulatory and financial reporting perspective.

Before we jump into the minutiae of regulatory compliances pertaining to valuations in India, let us first briefly examine the major merger and acquisition (“M&A”) and private equity (“PE”) deals between India and the U.S. in the last three years.

Major M&A and PE Deals between India and the U.S. in the last three years

The U.S. sources information technology services, textiles, gems and jewelry, food products, and iron & steel, amongst other products and services from India. On the other hand, India sources aircrafts, medical equipment, fertilizers, and computer hardware, etc., from the U.S. In 2005, a new programme titled “Trade Policy Forum” was created by the former President of the U.S., Mr. George Bush, and former Prime Minister of India, Mr. Manmohan Singh. The programme intends to achieve enhanced investment flow and trade between the two nations. The following tables underscore the major M&A and PE deals between India and the U.S. in the last three years. 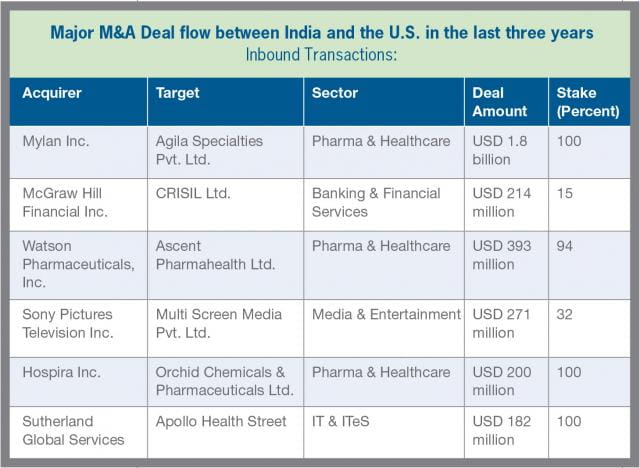 Valuation guidelines prescribed by the RBI under The Foreign Exchange Management Act, 1999

The Reserve Bank of India (the “RBI”) is India’s central banking institution, which controls the monetary policy of the Indian rupee (similar to the Federal Reserve System in the U.S.). Valuation guidelines are prescribed in the Master Circular on Foreign Investment in India (the “FEMA Circular”) issued by the RBI, dated July 1, 2013.

The RBI, in its monetary policy announced on April 1, 2014, stated that it has decided to withdraw the valuation norms governing issue and transfer of shares under the foreign direct investment (“FDI”) route and, going forward, transactions will be valued based on acceptable market practices. The announcement also indicated that the operating guidelines governing the same shall be notified separately.

All Indian companies issuing equity shares, fully and mandatorily convertible debentures, and fully and mandatorily convertible preference shares are subject to the pricing guidelines / valuation norms and reporting requirements, amongst other requirements, as prescribed under FEMA Regulations. To understand the valuation guidelines in an easier manner, the same have been bifurcated into inbound and outbound transactions as below:

Transfer or issue of shares by an Indian resident to a non-resident:

The issue of shares on preferential basis shall be made at a price not less than higher of the following:

Transfer of shares by a non-resident to an Indian resident:

As per The Companies Act, 2013 (prevalent company law in India), all valuations in respect to any property, stocks, shares, debentures, securities, goodwill, net worth of a company, or its liabilities need to be carried out by a person having such qualifications and experience and registered as a valuer (“Registered Valuer”). Further, for valuation requirements of a company, the Registered Valuer shall be appointed by the Company’s Audit Committee or in its absence, by the Company’s Board of Directors.

Following are the important sections under The Companies Act, 2013 pertaining to the valuation requirements: 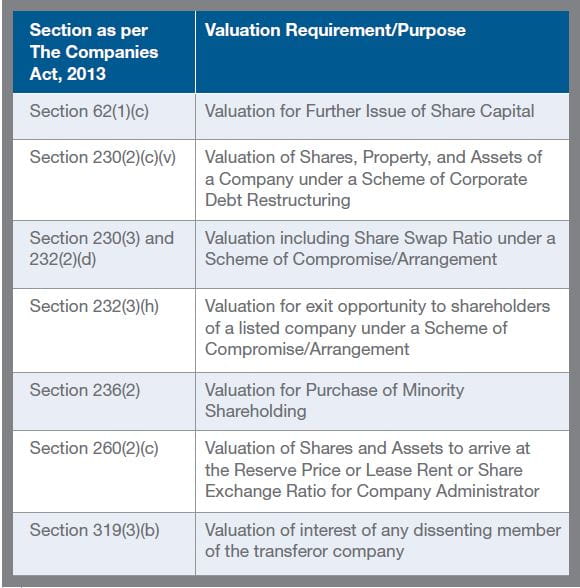 Upon consummation of a transaction of an Indian company, and if following Indian GAAP, it is not mandatory for the acquirer to recognize the assets and liabilities of the acquiree at their Fair Values. However, companies in India have historically preferred to undergo the purchase price allocation exercise in order to incorporate the appreciation in tangible assets (especially land) and identify those intangible assets and liabilities that have not been recognized on the balance sheet of the acquiree.

Amortization: The difference of purchase consideration paid over and above the Fair or Book Value of net tangible and intangible assets, as applicable, is recorded as goodwill. Under Indian GAAP, goodwill is capitalized and is allowed to be charged to earnings over five years (as per AS 14) to 10 years (as per AS 26).

Impairment Testing: As per AS 28, goodwill may be tested for impairment if certain indicators exist based on external or internal sources of information — including, diminution in the investment value, changes in market conditions, and changes in the regulatory environment.

Given that the regulatory environment in India is changing, it is critical to stay abreast of the valuation requirements when undergoing an acquisition in India. As detailed above, in certain transactions it may be required to engage an appropriate valuation professional (i.e., Registered Valuer, Category I Merchant Banker registered with the SEBI, or Chartered Accountant who is member of the ICAI, as applicable) to satisfy the specific regulations in India. Further, post combination valuation requirements and accounting for transactions in India can be very different from currently prescribed guidance for U.S. GAAP and IFRS. It is thus critical to have a sound understanding of the financial accounting valuation treatment and implications when planning from a transaction standpoint.