The Taxing Side of Divorce

The Taxing Side of Divorce

What is Unallocated Family Support and Why Should I Use It?

To realize tax the benefits of using unallocated family support, the payments must qualify as taxable/deductible alimony under Internal Revenue Code (IRC) §71.

A payment is fixed as child support, and thus non-deductible by the payor, if the governing instrument designates a sum as payable for the support of a child of the payor or the payment is reduced on the happening of a contingency related to the child or at a time which can be clearly associated with such contingency (Reg. §1.71T Q-16). Events that relate to a child include the child’s attaining a certain age or income level, dying, marrying, leaving school, leaving the spouse’s household, or gaining employment.

There are two situations in which a reduction in payments will be presumed to be clearly associated with a contingency related to a child as follows:

These are rebuttable presumptions which can be overcome by showing that the time at which the payments are reduced was determined independently of any contingency related to the children. In general, if the reduction in payments is attributable to a complete cessation of alimony or by showing that alimony payments are to be made for a period customary for the jurisdiction, the payments will not be determined to be child support.

If it is determined that a reduction in payments is associated to a contingency related to a child, only the amount of the reduction will be considered child support. For example, assume the payee has been paying monthly family support of $4,000 for 3 years. In the fourth year, which happens to coincide with the 18th birthday of a child, the payment is reduced to $3,000 a month. The $1,000 will be considered child support, not only in the year of reduction but retroactively for all prior payments.

Because the payor of support is assumed to be the higher income party, the total support can be deducted at his or her higher marginal tax rate and included in taxable income at the recipient’s lower tax rate. The recipient should receive increased support to cover the tax burden on the child support portion of the payment. Assume the following facts:

By converting the child and spousal support to unallocated family support, the parties have received a $3,350 tax subsidy with both parties enjoying additional disposable income. 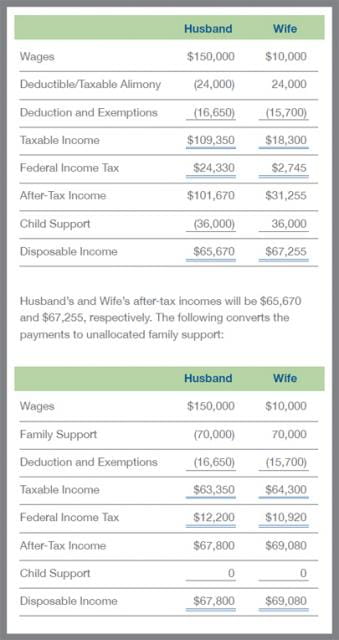 Death of the Payee

If the decree provides that any payments in cash or property must be made after the payee spouse’s death as a substitute for otherwise qualifying payments before the death, such payments will not qualify as alimony. To the extent that the payments begin, accelerate, or increase because of the death of the payee spouse, the payments, in whole or in part, may be treated as payments that were not alimony. Whether or not such payments will be treated as not alimony depends on all the facts and circumstances.

The divorce or separation instrument does not have to expressly state that the payments cease upon the death of the payee spouse if, for example, the liability for continued payments would end under state law (IRS Notice 97-9, 1987-1 C.B. 421). Thus, it is imperative to know the applicable state laws. Consider the different results in the following cases.

Pursuant to the parties’ 2001 divorce decree, Husband was to pay his ex-wife “the amount of $1,700 per month as and for family maintenance.” The non-modifiable payments were to be made for 6 years. Additionally, if a child was still a minor at the end of the 6-year period, the parties would agree to an amount of child support. Husband deducted the payments.

From April 1992 through January 1997 when a final judgment of divorce was entered, Husband was ordered to make monthly payments to wife for the support of the wife, children, and the household. Husband deducted the amount of the monthly payments on his tax returns for the years 1992 through 1996. Wife did not report the payments as taxable income. The IRS issued deficiency notices to both parties.

Ms. Kean argued, in part, that Mr. Kean would have been required to continue making the payments even if she died. However, an order issued pendente lite in a New Jersey divorce proceeding does not survive the death of the payee. Although Mr. Kean would still have a legal obligation to support his children, he would have no obligation to make further payments to Ms. Kean or her estate. Thus, by operation of New Jersey law, the payments satisfied the requirement that they end on the death of the payee and thus, deductible by Mr. Kean and taxable to Ms. Kean.

In summary, unallocated family support may not be appropriate in all cases, but it is a useful tool too often overlooked in settlement negotiations.