Acadiana Management Group (AMG), a privately owned operator of long-term acute-care (LTAC) hospitals and inpatient rehabilitation services, recently consummated a restructuring through a new money plan of reorganization. At its peak, AMG was a top five post-acute hospital system nationally with over $100 million in annual revenue. During the 2011 to 2015 time period, AMG expanded dramatically by adding 11 facilities largely through acquisitions. The company financed much of this growth through lines of credit and mortgage loans on its owned facilities. AMG continued to prosper, generating more than $10 million in annual EBITDA until 2017, when a significant Medicare reimbursement change was initially phased in and dramatically impacted the LTAC industry. As a consequence, in June 2017, AMG filed for bankruptcy in the Western District of Louisiana.

Medicare is the principal payor for LTAC services, and most companies in the sector focus their efforts to ensure their compliance with Medicare regulations. Beginning in fiscal year 2016, the Centers for Medicare & Medicaid (CMS) introduced a new payment system and qualifying criteria that significantly reduced payments to LTACs. In fiscal year 2015, LTACs received about $41,000 on average for a 25-day patient stay. With the new regulation fully implemented, in order to receive the full reimbursement, LTACs have to demonstrate, among other criteria, that their patients were in intensive care or on a ventilator for a minimum number of days prior to admission. In comparison, CMS will reimburse costs for non-eligible patients at a significantly lower per-diem rate, which equates to approximately $11,000 for a patient stay. With these stricter reimbursement standards, LTACs are scrambling to find a sufficient number of “compliant” LTAC patients and/or diversify away from LTAC services into home care, rehabilitation, wound care, and other ancillary services.

This industrywide change rendered AMG insolvent as the company had approximately $67 million of total debt and trade claims outstanding on the filing date (see Figure 1) as EBITDA plummeted to the low single digits. Given the non-sustainability of its capital structure, the company retained Stout as its financial advisor and Gold Weems as debtor counsel to construct a solution and lead AMG’s restructuring efforts.

AMG is a privately owned company founded in 1996, and one of the original owners was “cashed out” in a share-repurchase transaction in 2015, which ultimately led certain AMG creditors to threaten to pursue avoidance actions (though the merits of any such actions were strenuously disputed by the company).

In addition, despite the reimbursement-related headwinds, the owners remained bullish on the sector and believed they could adapt to the new reimbursement regime and still operate LTACs profitably, albeit with a deleveraged balance sheet. In fact, the owners were willing to inject “new money” to effectuate a reorganization while hopefully retaining majority control of the business. Although the owners were contemplating contributing one or more non-debtor rehabilitation hospitals that they owned and “writing a small check,” they would need to pay off the company's line of credit through a combination of exit (debt and equity) financing plus an equity check. It was clear that the existing asset-based lender (ABL) had no desire to roll into exit financing for the company once it emerged from bankruptcy due to overall negative LTAC industry sentiment.

Given the overall leverage relative to the new, post-reimbursement change EBIDTA level, a substantial haircut relative to the pre-petition debt would be required in connection with a new money plan. Thus, the debtors would need to test the market for the debtors’ assets before seeking bankruptcy court approval for any such new money plan to rebut likely arguments from AMG’s creditors that the new money plan was an “insider transaction” being offered at below-market terms. Furthermore, the market test needed to be comprehensive, genuine, and – due to liquidity constraints – expedited, but not so much as to compromise the integrity of the process, given that the debtors were likely to have aggrieved creditors, who were taking significant discounts, objecting to the plan.

Stout jumped in, and within four weeks of its diligence kick-off meeting, launched a dual-track M&A/new money equity/exit (debt) financing processes. Prior to launching our processes, we assisted management in determining which of its 14 LTAC hospitals were still economically viable in the face of the reimbursement change. In general, those hospitals that lacked a proximate dense population of high-acuity patients were shuttered, and the others were the focus of our M&A and new money plan efforts. Stout assisted the debtors in constructing a hospital-by-hospital business plan incorporating key assumptions about census and revenue per patient per day as AMG transitioned through the final phase of the reimbursement change, which was slated to “roll in” at the start of each respective hospital’s cost reporting year in 2018. (Subsequent to this process, the CMS announced it would delay the final phase of implementation of the reimbursement change by two years until the 2020 cost reporting year.)

M&A market sentiment surrounding the LTAC sector was understandably quite negative, and most logical strategic buyers were either seeking to diversify away from the LTAC sector or exit it entirely. Only a small handful of parties submitted bids, but only for one or a few hospitals, and ultimately the bids were at little to no purchase price (though the bidders offered to leave behind the accounts receivable for the debtors to collect).

The new money equity outreach seemed to garner better traction than the straight M&A as a handful of distressed private equity funds appeared intrigued by the opportunity. However, ultimately, due to the complexity of the situation, the relative small check size required, and the overhang and uncertainty relating to the final 2018 reimbursement change phase, no new money investors materialized.

Stout consulted with Lender A on the lines of credit throughout the process, and Lender A came to the realization that it was likely going to take a discount on its line of credit. However, with no real M&A or third-party new money options, and with exit-financing providers only willing to lend up to 85% of accounts receivable on emergence (no one was willing to “stretch” given the industry dynamics), Lender A was evaluating the possibility of liquidation. In fact, the benchmark from which all potential solutions were to be measured both by the Lender A (whose consent we needed to effectuate a plan), the other constituents, and the bankruptcy court, was the liquidation value of AMG’s hospitals. If the debtors could not provide a solution – some combination of sale(s) of hospitals, exit financing, and equity injection – that yielded at least an equivalent recovery to the liquidation scenario, then Lender A indicated they would force the liquidation. Fortunately for the debtors, hospitals do not liquidate cheaply because before a hospital can close, all patients need to be discharged (and an appropriate level of care obviously must be provided to them in the interim). These incremental wind-down expenses effectively lowered the “bogey” that the new money proponents (management) needed to beat by adding a fairly significant expense component to any liquidation scenario.

As the dual-track marketing process reached its conclusion, the specter of liquidation loomed large as liquidity rapidly eroded. The debtors had been living off of cash collateral, unable to procure debtor-in-possession (DIP) financing from either Lender A or a junior lender, and they did not meet the “equity cushion” criteria required to potentially prime Lender A. In fact, Lender A was seriously considering ordering the debtors to sell a few of the hospitals for a $0 purchase price, collecting the receivables from those hospitals, and then winding down the remaining hospitals as quickly as possible. It was clear that the only possible source of DIP financing would be management (existing equity) on a junior DIP basis, but they understandably feared “throwing good money after bad” as the prospects for recovery on a junior DIP through an M&A or plan structure seemed bleak. Management would only fund a junior DIP if they first had a formalized agreement with Lender A detailing the path to emergence, and committing Lender A to support such a transaction.

On the brink of a potential liquidation, as the debtors were about to “hit the wall” from a liquidity perspective, Stout constructed a solution in which the new money providers/management offered $2 million in DIP financing, which would subsequently be converted into equity, plus a $1 million additional equity check, which would be funded on emergence. Meanwhile, Lender A agreed that all of its recovery would come out of proceeds from accounts receivable outstanding as of the date of emergence; the proceeds would be subsequently collected by the debtors post-emergence. In this structure, the only contingency was that the debtors had to procure a small asset-based loan on emergence, with an initial borrowing base tied to in-house receivables (relating to patients not yet discharged) to fund certain exit-related expenses. From Lender A’s perspective, this structure resulted in a slightly higher recovery than liquidation and avoided all the operational risk and potential negative reputational impact of a hospital liquidation. As part of the plan, the current and former owners would also receive full releases, including relating to the share repurchase, which was funded with proceeds from a mortgage tied to a specific, no-longer-operating hospital (the Lender B Real Estate Loan in Figure 1). Mortgage lenders would take ownership of their underlying properties and receive large unsecured deficiency claims against the estate, which were slated for de minimis recovery on a percentage basis.

After the debtors filed a plan of reorganization with the bankruptcy court memorializing the terms of the plan, Lender B approached the debtors about alternative structures to the then-current plan in an apparent effort to protect its original $11 million investment and $7 million deficiency claim relating to such investment. The underlying real estate securing the Lender B loan had a market value of only approximately $4 million, and the deficiency claim was going to get virtually no recovery under the then-current plan construct. Lender B ultimately provided $23 million of debt financing to the newly emerged entity, which included the “rolling” of its $7 million deficiency claim (technically that $7 million was repaid with proceeds of the Lender B loan), thereby avoiding taking a write-down on its deficiency claim. As part of this revised transaction, management still retained 100% of the pro forma equity but had its $2 million DIP financing repaid with Lender B debt proceeds (as opposed to being converted to equity in the interim resolution with Lender A). In addition, management only wrote a $500,000 equity check (along with the contribution of one rehabilitation hospital) to effectuate the plan.

Figure 2 illustrates the impact of the restructuring transaction. 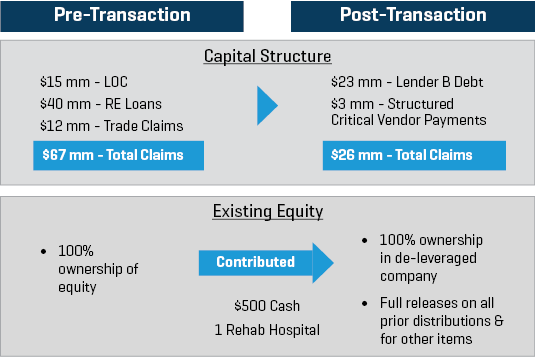 Benefits of the Transaction

The owners of AMG were ultimately able to retain 100% ownership of the company while reducing debt and trade payables by over $40 million, from approximately $67 million to $26 million. This was all in exchange for a $500,000 equity check and the contribution of the equity in one rehabilitation hospital which was generating $2 million of LTM EBITDA (with over $1 million of debt at that entity). In addition, the owners obtained releases from all the key constituents with respect to the prior shareholder distribution and other items.

It was a remarkable result which required (i) a highly expedited M&A/financing market test to be run as a “market check”; and (ii) Stout and Gold Weems to construct a creative solution to avoid outright liquidation. Stout and Gold Weems ultimately acted as mediators between the owners and creditors to create a plan that, while unorthodox, was ultimately confirmed by the Bankruptcy Court.

Other business owners facing similar maturity, liquidity, or other covenant issues should carefully consider the merits of new money alternatives as compared to injecting additional equity behind a highly leveraged capital structure. Depending on the circumstances and specific deal dynamics, it may be possible to achieve a superior outcome through a new money plan of reorganization predicated on a deleveraging of the existing capital structure.

For additional commentary on this matter, read our discussion with Jessica McGee, Acadiana Management Group's CFO and Vice President of Corporate Operations. 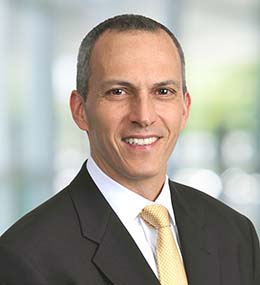 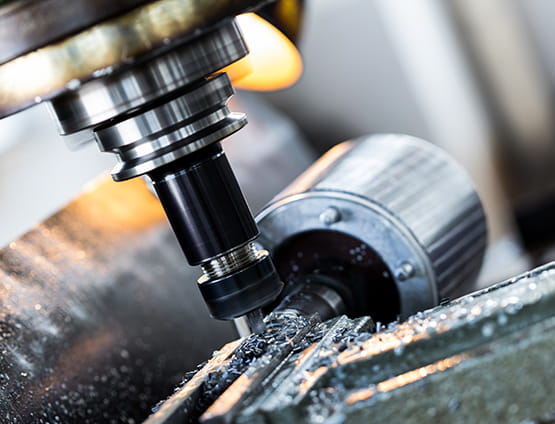 Advised on sale of tool and die manufacturer