Strong Food & Beverage (F&B) industry M&A activity continued through the third quarter of 2019 with 39 completed transactions during the quarter; although this represents a 29% decrease year over year (YoY), the headline number masks a resurgence in financial buyer / private equity activity. Trailing 12-month (TTM) volume is down a modest 4% with 209 transactions completed while reported TTM value declined approximately 9% to $32.4 billion (a rash of large deals completed in late 2017 / early 2018 skews the comparison).

Barring an extraneous geopolitical event (e.g. severely escalating trade war with China, war with Iran) we expect the remainder of 2019 to be robust given 1) valuations remain at peak levels, 2) credit markets are still highly accommodative, 3) private equity’s capital overhang is at historical highs, and 4) strategic buyers continue to seek accretive growth at all costs (though they are increasingly finding themselves outbid by financial buyers). 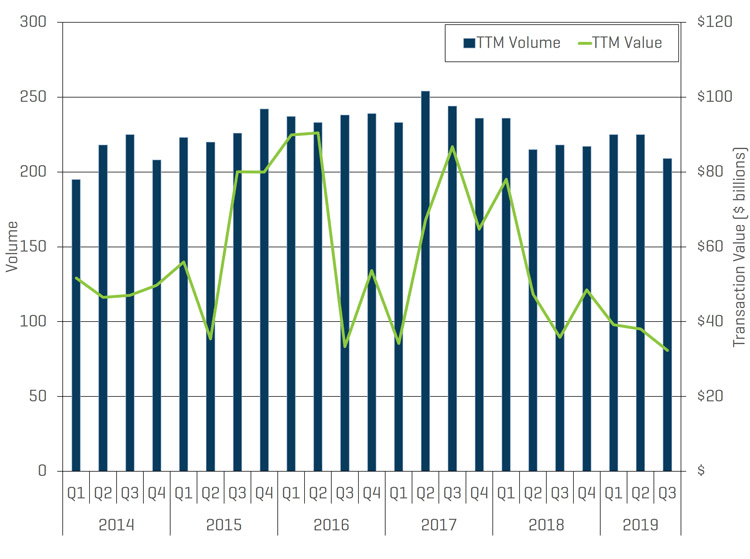 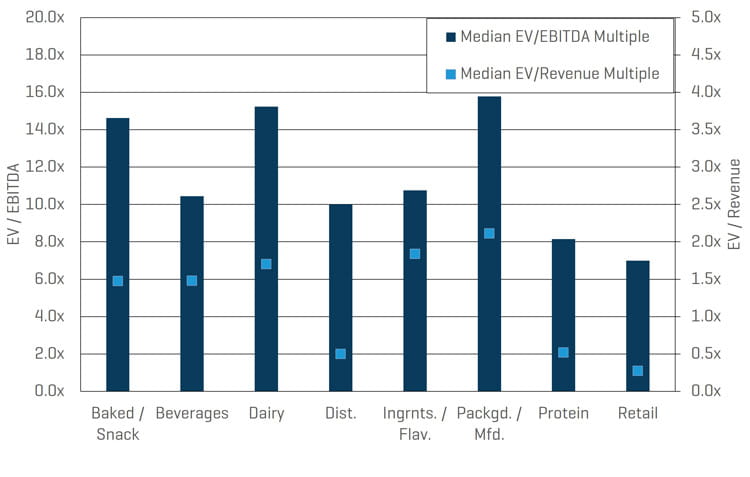 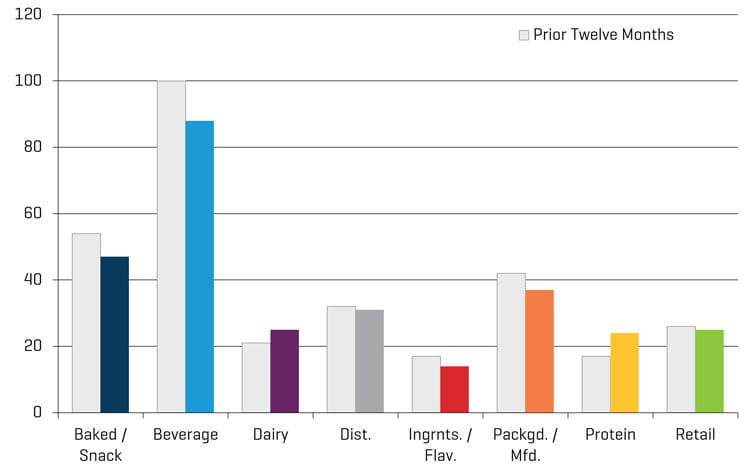 TRANSACTIONS COMPLETED OVER PAST 12 MONTHS, BY BUYER TYPE 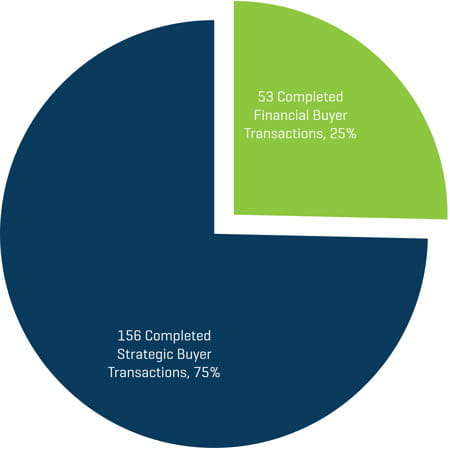 Across all sectors of the economy, we estimate that transaction valuations are materially higher than just a few years ago and F&B is no exception. A linear regression of our proprietary data set indicates that multiples for F&B is between two to four multiples of EBITDA higher than the long run average. Valuations at these levels are unprecedented – and as many industry veterans would say, unsustainable.

Recent deals of note include:

Overall, larger deals still command size premiums, though even at the lower end of the market (i.e. transactions below $250 million) multiples have recently averaged 9.3x EBITDA. 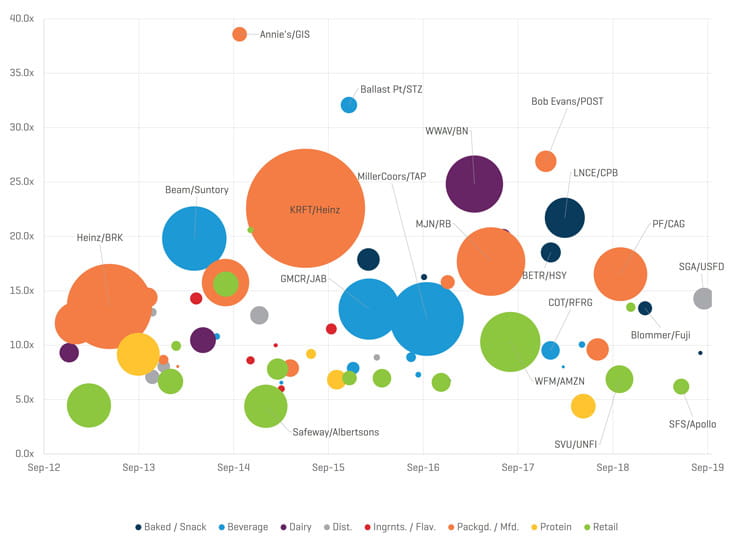 The past twelve months have been a mixed bag for large, publicly traded F&B company stock prices. Protein – coming off a few tumultuous quarters – outperformed all but one other category while the Dairy sector continued its woes. Other winners included Packaged / Manufactured (the best performing category), Ingredients / Flavorings, and Baked / Snack. Retail and Distribution largely erased the losses seen in the second quarter of 2019. Only Dairy severely underperformed the F&B universe as well as the broader stock market. 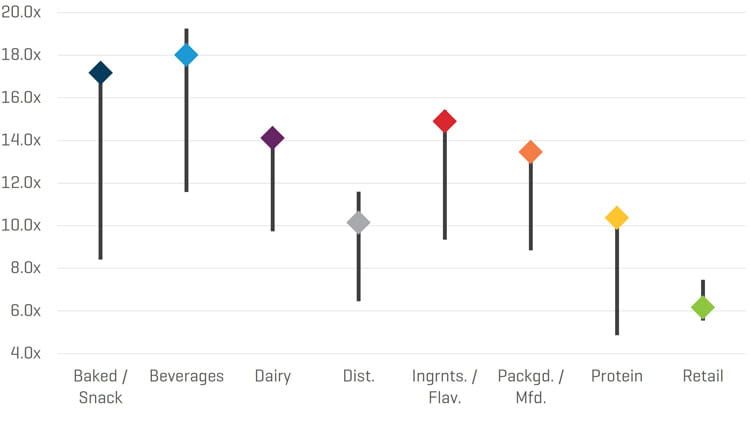 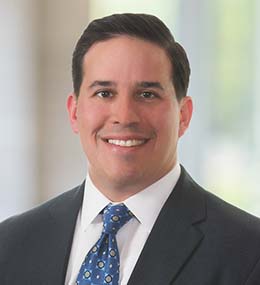 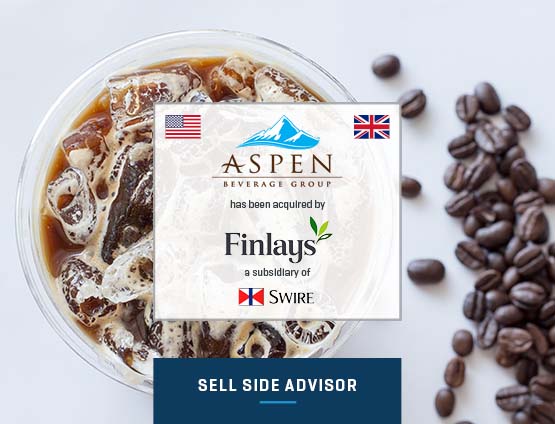 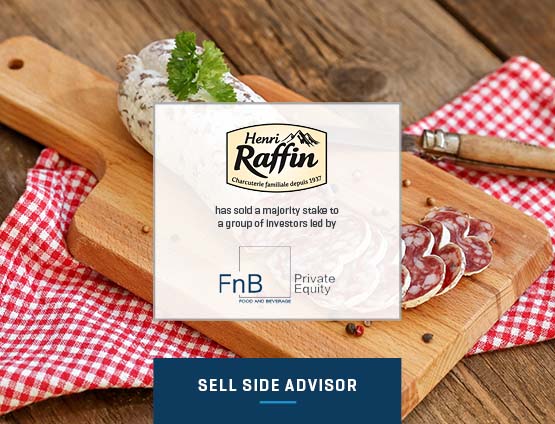