Energy markets continued to improve during the second quarter of 2018. Crude prices added to gains even amidst future uncertainty, highlighted by continued backwardation. Permian Basin activity remains the key driver of U.S. unconventional activity and has supported the continued recovery of sectors such as production and well services, energy equipment manufacturers, and contract land drilling, which has stabilized the gains achieved in recent quarters. 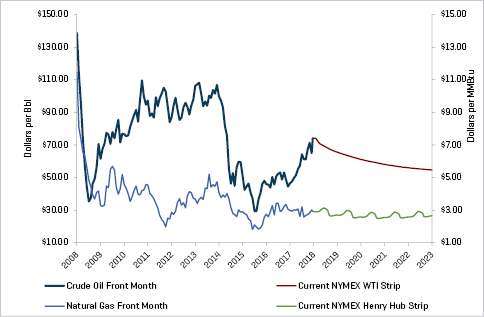 These positive developments were partially offset by continued efficiency and growth in North American production and a commensurate surge in U.S. crude oil output. The average U.S. land rig count increased by 47 rigs, approximately 4.8%, from 981 to 1,028 rigs during the quarter, of which 31 rigs were added to the Permian Basin, representing an increase of approximately 7.0% in the region. 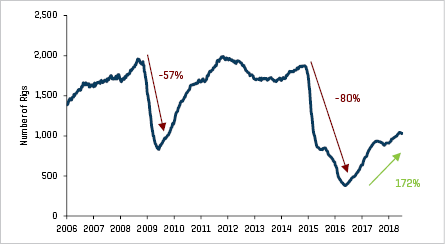 Increase in U.S. Land Rig Count by Basin Since May 2016 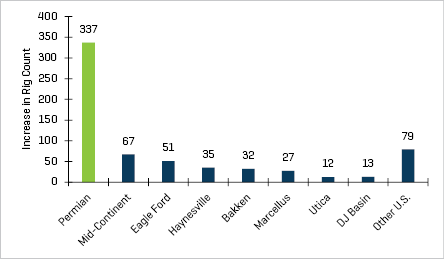 Backwardation in the crude oil market continues to highlight concerns regarding longer-term crude pricing. The NAM market also continues to benefit from drilling and completion efficiencies, although the pace of efficiency is anticipated to moderate. Despite increases in pricing in certain service segments, the enhanced production outweighs the incremental costs.

Public valuations for energy companies experienced less volatility during the quarter, with the Philadelphia Oil Service Sector Index (OSX) increasing 14.1% (closely tracking the gain in crude oil prices). The S&P 500 Index only increased 2.9% during the quarter. After meaningfully higher volatility in the first quarter of 2018, which exhibited 23 days of 1% price swings, the general market (S&P 500) volatility slowed in the second quarter with 13 days of 1% price swings. Recent energy performance may indicate a softening of concerns regarding rapid production growth due to elevated crude oil prices encouraging more activity. In fact, a number of research analysts have recently highlighted concerns about crude oil supply in future years due to persistent underinvestment during the downturn. 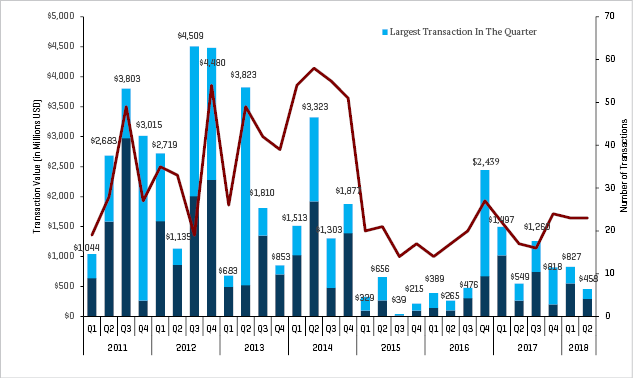 Production and well services transactions have remained the most active OFS sector in NAM by transaction count and dollar value (excluding the AKITA acquisition of Xtreme Drilling, which accounted for $162 million of the total drilling sub-sector dollar value of $166 million). Energy equipment manufacturing also remains very active by the number of transactions. Offshore services continued to represent the weakest sector (by transaction count), while drilling saw more activity in the second quarter of 2018, with three transactions, approaching its full-year 2017 tally when it reached only four transactions for the entire year.

Advised contract drilling services on sale of all company assets