The business valuation profession has continually been at war with the Internal Revenue Service regarding the impact of capital gains tax liabilities on the value of privately held companies that hold appreciated assets. This war has had its fair share of battles that have made their way to the U.S. Tax Court, and beyond. Slowly but surely, the arguments for recognition of these contingent liabilities have begun to resonate with the IRS and the judiciary. The taxpayer victory in the 2008 United States Tax Court case, Litchfield v. Commissioner, represented the first time the Tax Court ruled in favor of the recognition of capital gains tax liabilities for S corporations. Previous rulings have only involved C corporations.

Given the tax attributes of S corporations, the 1986 Congress was concerned that C corporations would convert to S corporations, distribute appreciated assets to shareholders, and avoid C corporation BIG tax liabilities. In order to prevent this from occurring, Congress enacted Internal Revenue Code (IRC) Section 1374.

Under Section 1374, if an S corporation sells or distributes assets after a C-to-S conversion, the company will be subject to income taxes—at the highest C corporation income tax rate—on the asset appreciation that arose prior to the C-to-S conversion. In addition, the S corporation shareholders recognize their pro-rata share of the gain—net of the gain taxes paid by the company—as ordinary income on their respective income tax returns. As such, the adjusted gain is subject to a second layer of tax at ordinary income tax rates. This tax treatment continues for a period of 5, 7 or10 years (depending on the date of the conversion) after the C-to-S conversion. Section 1374 refers to this multi-year period as the “recognition period.” The following table illustrates the Section 1374 tax treatment. 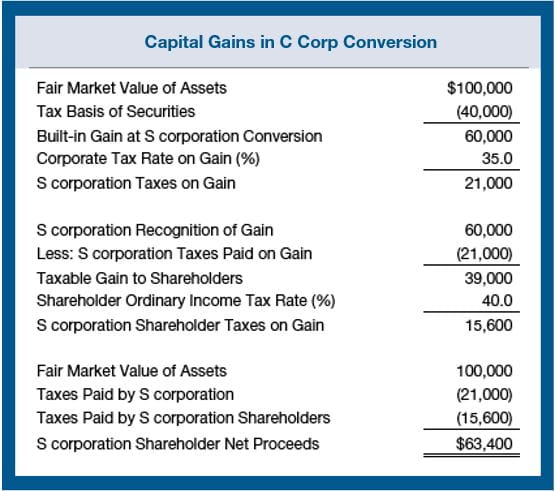 As illustrated in the “Capital Gains in C Corp Conversion” table, the C corporation held capital assets (the “Assets”) with a fair market value of $100,000 and a basis of $40,000 prior to the C-to-S conversion. The company converted to an S corporation and subsequently distributed or sold the Assets. In this situation, the company recognizes a gain at the corporate level and pays taxes at the highest C corporation income tax rate of 35 percent. In addition, the company reports income of $60,000. Of the total $60,000 in income, the shareholders recognize taxable income of $39,000 ($60,000 - $21,000) and pay ordinary income taxes of $15,600 ($39,000 x 40%) on their personal tax returns. Consequently, company shareholders receive net proceeds of $63,400.

The table above assumes that the company sells or distributes the assets immediately after the C-to-S conversion. As discussed, the BIG tax liabilities are avoidable if the shareholders wait for the year recognition period to expire. However, during the recognition period, the investor is subject to a lack of liquidity and holding period risk that may substantially impact the attractiveness of employing this strategy.

To demonstrate this concept, assume an asset holding company (“ABC”) is operating as a C corporation and has the following attributes:

The company has determined that it will conduct a C-to-S conversion. Based on the attributes listed above, the value of the equity of the C corporation will not increase immediately as the result of a C-to-S conversion. This is due to the adverse tax consequences of asset liquidations pursuant to Section 1374. As discussed, these adverse tax consequences exist until the expiration of the recognition period. (Here, we are using a ten year period.) However, over time, the recognition period gradually declines. As the recognition period declines, the time necessary to hold the asset in order to avoid the BIG tax liability also declines. At some point during this process, the risk of holding the asset has a lower impact on the value of the equity of ABC than the BIG tax liability discount. When this occurs, the appropriate valuation discount is the holding period discount rather than the BIG tax liability discount. The following Chart 1 demonstrates this concept. 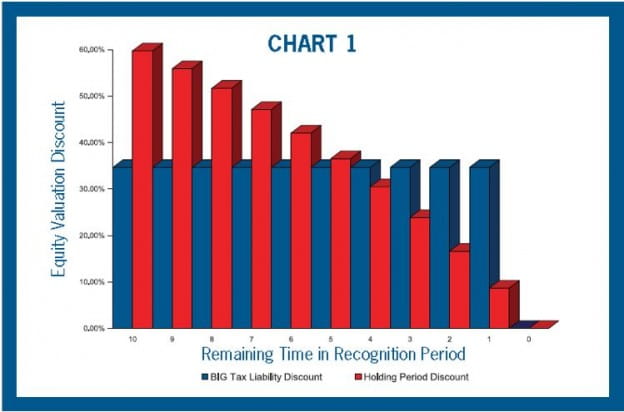