A 10-day bench trial was concluded on October 26, 2012, in the case of U.S. Bank National Association, as Litigation Trustee of the Idearc, Inc. et al. Litigation Trust (“Plaintiff”), v. Verizon Communications, Inc., Verizon Financial Services, LLC, GTE Corporation, and John W. Diercksen (collectively the “Defendants”).1 This bench trial was conducted for the purpose of the court deciding the following factual question: “what was Idearc, Inc.’s (“Idearc”) value at the time it was spun off from Verizon Communications Inc. (“Verizon”) in November of 2006.”2 Idearc was a wholly owned subsidiary of Verizon prior to a spin-off on November 17, 2006 (the “Valuation Date”). Subsequent to the spin-off, Idearc operated as an independent and publicly traded company (NYSE:IAR) until filing a petition for reorganization under Chapter 11 of the Bankruptcy Code in March 2009. The Idearc, Inc. et al. Litigation Trust was created to pursue, among other things, potential claims against the Defendants.

Both the Plaintiff and Defendants presented expert testimony at trial as to the value of Idearc as of the Valuation Date. The Plaintiff’s expert considered several approaches, but placed primary weight on a discounted cash flow method and testified that the market price of Idearc’s stock was unreliable. The Defendants’ experts provided rebuttal testimony, arguing the opposing expert’s assumptions resulted in primary weight being placed on an approach that was a significant outlier in relation to other valuation methodologies. This article focuses on the court’s interpretation of market information and other factors as of the Valuation Date and the importance of reconciling valuation approaches. 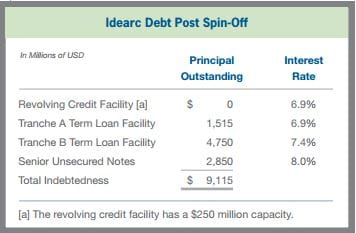 The Plaintiff’s expert utilized three different approaches to determine the enterprise value (“EV”) of Idearc as of the Valuation Date. The approaches consisted of a method utilizing the EV to earnings before interest, taxes, depreciation, and amortization (“EBITDA”) multiples of a group of public companies ostensibly similar to Idearc (the “Market Multiple Method”), a method based on the EV to EBITDA multiples implied by transactions involving public companies ostensibly similar to Idearc (the “Comparable Transaction Method”), and a discounted cash flow (“DCF”) method.

When calculating the concluded range of EV, the Plaintiff’s expert only gave 15% weight to the Market Multiple Method due to: 1) Idearc’s inferior financial performance relative to comparable companies; 2) the companies selected in this analysis were not comparable enough to warrant higher weighting; 3) only one comparable company, R.H. Donnelly, Inc., was an incumbent print company operating in the United States; and 4) R.H. Donnelly, Inc. received significant tax benefits in association with a previous acquisition that would not be available to Idearc. The Comparable Transaction Method was also given 15% weight due to the Plaintiff’s expert’s assertion that the 17 transactions compiled by Houlihan Lokey,4 which were utilized by the Plaintiff’s expert, did not involve reasonably comparable companies and the fact that a Tax Sharing Agreement between Verizon and Idearc, in the expert’s opinion, prevented Idearc from accessing the transactions market.

Idearc’s common stock became publicly traded on the New York Stock Exchange (“NYSE”) as a result of the spin-off. The Plaintiff’s expert did not include a determination of what EV would be as implied by Idearc’s trading price. The Plaintiff’s expert testified that investors overvalued Idearc because of the following alleged misrepresentations and omissions made by Verizon: 1) Verizon failed to disclose significant differences in EBITDA margins generated by Idearc’s incumbent print and electronic business; 2) Verizon concealed year-over-year declines in revenue in specific northeast urban markets; 3) management had consistently failed to meet its projections, but had not disclosed the missed projections to the market, which rendered Idearc’s stock price unreliable; and 4) Verizon did not disclose a pessimistic report prepared by McKinsey & Company about the future prospects of the directories business, which rendered Idearc’s stock price unreliable.

The Defendants presented multiple experts to testify and offered other evidence to rebut the case made by the Plaintiff. A few issues highlighted by the Defendants are listed below.

The court addressed the multiple points of contention between the opposing experts. The court stated that there is no dispute that the Plaintiff’s expert’s valuation of Idearc using the DCF method produced an indication of value that was an extreme outlier even within the expert’s own analysis (i.e., compared to the indications of value via the Market Multiple Method and Comparable Transaction Method). The court was not persuaded that the DCF valuation provided by the Plaintiff’s expert was more reliable than these other methods, which showed that Idearc was solvent on the Valuation Date. However, the court was persuaded by the testimony of the Defendants’ expert, who showed that the opposing expert’s valuation was flawed in significant ways with respect to its most important inputs.

Ultimately, the court concluded that the total EV of Idearc on the Valuation Date was at least $12 billion.5

Reconciliation of DCF Value with Market Indications of Value

The Plaintiff’s expert concluded on values via the Market Multiple Method and Comparable Transaction Method that were approximately 110% to 150% different than the value indicated by the DCF method. This substantial difference clearly supported the opposing expert’s claim that the DCF conclusion was an outlier. While the Plaintiff’s expert attempted to discount the market approaches and the publicly traded value of Idearc, the court found that the evidence presented by the Plaintiff was not convincing enough to disregard the market indications of Idearc’s value.

Other Factors Contributing to the Court’s Decision

Not every decision made by the court was based on the testimony of the opposing experts. Other evidence was presented during this trial that supported the Defendant’s case. Multiple forms of evidence were presented that refuted the Plaintiff’s claims of Idearc being a “harvest business” that was dying and did not have much growth potential. Furthermore, evidence was presented by the Defendants supporting the market price of Idearc’s stock, given the information that was made available to the market. Some of this evidence consisted of: memoranda submitted to credit committees of Idearc’s debt investors, analysis from Morgan Stanley presented to Verizon, the demand for Idearc’s debt securities resulting in an oversubscription of each tranche of Idearc’s debt, and independent valuation conclusions prepared by major banks (i.e., Morgan Stanley, Citibank, and Goldman Sachs). The court found that this evidence contradicted the Trustee’s claim of Idearc attempting to present a false picture of its historical and future prospects to the market. In addition, given the extensive evidence presented, the Plaintiff’s expert had less support for the exclusion of the value of Idearc implied by its publicly traded stock.

A tremendous amount of evidence was presented by both the Plaintiff and Defendants for this bench trial. It should be noted that the court did not explicitly opine that the market approach is a preferred valuation methodology. However, the consistency of the market indications of value in this case clearly outweighed the Plaintiff’s outlying DCF valuation conclusion. In any valuation, the expert must evaluate the applicability of multiple valuation approaches. Furthermore, the court’s findings in this case emphasize the importance of having appropriately reconciled conclusions when utilizing multiple valuation approaches or having supportable evidence for a valuation conclusion that implies a significantly different conclusion from other methodologies.