Over the years, as companies have diversified, spin-offs have become more and more difficult for the market to value.

A spin-off occurs when a company identifies a division or subsidiary of the company and separates it by creating a newly independent company. For a publicly traded company, this typically involves the parent company (the “Parent”) distributing shares of the subsidiary or division (“SpinCo”), usually resulting in the existing shareholders receiving a pro rata ownership share in each company. In 2014, more than 80 spin-offs were announced, a record high over the past five years. As shown in the chart, the number of announced spin-offs has exceeded that of any of the last five years by more than 50%. While there is no one underlying reason for the increase, pure-play businesses have been increasing in popularity as the economy has improved. In downturns, consolidation and diversification are more popular, as investors want to see stability in earnings. However, as the economy improves and investors are more confident in the market, their appetite for risk (and growth) increases. This fact pattern may help explain the increase in the number of spin-offs in recent years.

Unlike an outright sale of the business unit, a spin-off is structured as a tax-free distribution to shareholders (or at least a more taxefficient distribution) and can often create higher returns for the existing shareholders of the company. A company may decide to do a spin-off for a number of reasons, but in most cases, the primary reason is to “unlock” value for its shareholders. The idea behind a spin-off is that a division’s full value is not being realized in the current trading price of the Parent prior to the spin, so splitting the business allows the market to appropriately value each part of the business. Oftentimes, independence motivates the respective Parent and SpinCo management teams to look for opportunities to run the business more efficiently, focus their attention on core products and service offerings, or search for more targeted strategic opportunities. 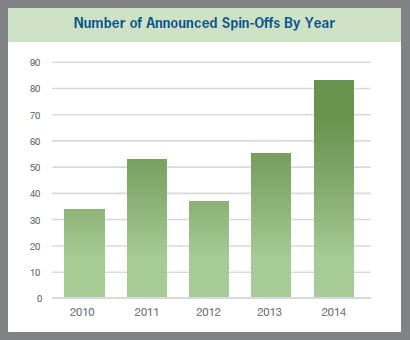 There have been a number of recent spin-offs in the media industry (completed and pending) designed to separate the newspaper or print business from the other media segments they own. For the most part, this is due to the fact that the newspaper industry is perceived by investors to have much lower growth potential than other forms of media (i.e., digital, television, etc.) and, as a result, companies with substantial newspaper or print assets are being undervalued because of the underperforming newspaper / print segment. As separate companies, it is anticipated that the nonnewspaper business will trade at a much higher multiple than the Parent did on a combined basis, which will outweigh any lower multiple implied from the newspaper business as a stand-alone. While a number of these transactions have yet to close, when Twenty-First Century Fox, Inc. (NasdaqGS: FOXA) spun off News Corporation (NasdaqGS: NWSA) in June 2013, the new companies (Parent and SpinCo) traded more than 60% higher and 82% higher (30 days and 365 days, respectively, following the completion of the transaction) than the Parent prior to the transaction. In comparison, the S&P 500 increased approximately 26% and 47% over the same 30-day and 365-day periods, respectively, resulting in an implied premium of approximately 35 basis points in each instance. Shortly after the completion of the Twenty- First Century Fox deal, Tribune Company announced its plans to split itself into two companies, Tribune Media Company (NYSE: TRCO) and Tribune Publishing Company (NYSE: TPUB). The Tribune deal was completed in July 2014, with the newly formed companies trading at a premium of more than 25 basis points over the market 30 days following the transaction. In July 2014, Journal Communications, Inc. (NYSE: JRN) and The E.W. Scripps Company (NYSE: SSP) announced that the two companies would merge and then spin off the combined newspaper and television businesses into two separate companies. Finally, in August 2014, Gannett Co., Inc. (NYSE: GCI) announced that it would split into two public companies, broadcast and digital and publishing / websites.

While the media industry provides some specific examples, spinoffs in general have created incremental value to shareholders over time. In order to determine how much incremental value was created, we reviewed 117 spin-offs of U.S. companies that were completed between 2010 and 2014. Prior to the spin-offs, the companies ranged in size (based on market capitalization) from $19 million to $205 billion, with the median size around $5 billion. From the study, it was determined that the median and average increase in value resulting from the spin-offs were 29.2% and 56.3%, respectively. The median and average premium over the S&P for those transactions were 5.3 basis points and 26.6 basis points, respectively.1 However, as shown in the chart below, there can be extremes in the post-transaction outcomes, with the value of the post-spin-off entities on a combined basis ranging from 98.6 basis points less than the Parent pre-transaction to 522.5 basis points higher.2 Moreover, because there is risk inherent in these transactions due to general economic and market performance as well as company specific factors, it is important to understand the sensitivity around the transaction, particularly with respect to the downside, as the spin-off may not have the desired effect that was originally intended, resulting in lower values for the Parent and SpinCo on a post-transaction basis.

In creating the two separate companies, it is important to understand the allocation of assets and liabilities between the Parent and SpinCo, particularly to ensure that no transfer of assets or liabilities may be voidable as a fraudulent conveyance. Transfers may be considered fraudulent conveyances if the entities do not meet applicable solvency and capital requirements under federal and state law. In general, transfers of assets or liabilities cannot be made for less than “reasonably equivalent value” or the transaction may be set aside, particularly if post-transaction, either entity fails to meet the federal and state law tests of solvency. In order for a company to be solvent, the following must all be true (after giving effect to the proposed transaction):

Additionally, in order to qualify as a legal dividend in most jurisdictions, the SpinCo dividend must come from the Parent’s surplus capital. Therefore, the following surplus test is generally performed:

As such, it is advisable for the board of directors of Parent to consider obtaining a solvency opinion from a financial advisor for both the Parent and SpinCo on a post-spin basis, as it will provide some protection for the directors in the event that they are later sued under the premise that the transaction constituted a breach of their fiduciary duties or represented an illegal dividend.

Spin-offs are one of many things that companies can explore to create shareholder value. Over the years, as companies have diversified, they have become more and more difficult for the market to value. Investors like to put companies in “neat little boxes” that allow them to easily analyze and determine value. Spin-offs appear to be in vogue again as investors increasingly clamor for highergrowth, pure-play businesses, and some companies are more hesitant to make risky acquisitions that may or may not deliver the potential synergies and diversification benefits that are envisioned upfront. At the same time, spin-offs are a tax-advantaged way of refocusing the companies on their core competencies. Further, as noted from our study, spin-offs can create incremental shareholder value without the risk of deploying substantial sums of capital in the hopes of generating accretive earnings.

1 For those transactions closing after February 2014, we calculated the increase between the close date and the latest available trading price (as of February 2015).

2 It should be noted that given the time lapse between the announced date and 365 days post-close, other factors not specific to the transaction may influence the implied return.