An updated version of this article is available. Please see "Interest Rate Swaps: Value Drivers for These Popular Hedging Tools," published in the Spring/Summer 2017 Journal.

Interest rate swaps are derivative instruments that have long been used by companies to hedge against exposure to fluctuations in interest rates. Carried at fair value, most reporting entities historically obtained broker-dealer quotes to mark a swap’s value to market in each reporting period. While these broker-dealer quotes certainly incorporate assumptions regarding future interest rates, they may not incorporate an assumption regarding counterparty credit risk – i.e., nonperformance risk – which must now be accounted for in accordance with Financial Accounting Standards Board (“FASB”) Accounting Standards Codification (“ASC”) Topic 820, Fair Value Measurements and Disclosures (“FASB ASC 820,” formerly known as SFAS 157). Moreover, model inputs to swap analyses are not typically divulged by the broker-dealer, which may pose a problem from an audit perspective.

These factors have led to an increased need for financial statement preparers to perform vigorous financial analysis to derive the fair value of such instruments. This article outlines key characteristics of the pertinent accounting guidance for interest rate swaps and presents an example of the valuation techniques used to measure the asset or liability associated with a plain-vanilla fixed-for-floating interest rate swap in accordance with current financial reporting requirements.

An interest rate swap is an agreement between two parties (also referred to as counterparties) where one stream of future interest payments is exchanged for another based on a specified principal amount (referred to as the “notional amount” or “notional value”). Typically, interest rate swaps are structured such that one party pays a variable rate (the “Floating Payer”) and one party pays a fixed rate (the “Fixed Payer”); however, only the net amount due from the Fixed Payer or Floating Payer is due at each payment date depending on movements in interest rates. Generally, companies enter into credit agreements with banks based on a benchmark interest rate such as LIBOR or prime, plus a “spread” for a total interest rate. Companies often enter into swap agreements as the Fixed Payer in order to limit interest expense volatility.

At initial recognition, the terms of the agreement (outlined in a term sheet) are typically established such that the net present value of the anticipated payments from the Floating Payer and the Fixed Payer is equal to zero. However, changes in interest rates and counterparty credit risk can result in an advantageous or disadvantageous financial position for counterparties in subsequent reporting periods.

Interest rate swaps are accounted for under the guidance of FASB ASC Topic 815, Derivatives and Hedging (“FASB ASC 815,” formerly known as SFAS 133) as either fair value hedges, which hedge against exposure to changes in the fair value of a recognized asset or liability, or cash flow hedges, which hedge against exposure to variability in the cash flows of a recognized asset or liability. In both cases, the fair value of the hedge (as defined in FASB ASC 820) must be determined at each reporting period, and the gain or loss related to the hedging instrument may need to be recognized.

Of particular importance when valuing interest rate swaps or other financial instruments, FASB ASC 820 requires that the fair value measurement assumes that the liability for the paying party is transferred to a market participant at the measurement date (i.e., the liability to the counterparty continues rather than being settled) and the nonperformance risk relating to that liability is the same before and after its transfer. Nonperformance risk refers to the risk that the obligation will not be fulfilled and affects the value at which the liability is transferred. In the case of interest rate swaps, the reporting unit must consider the effect of its own credit risk as well as that of its counterparty depending on the net financial position of the derivative in order to maintain compliance with FASB ASC 820.

In this example, Company A entered into an interest rate swap with Bank B on January 1, 2007 for a notional amount of $100 million. Company A is the Fixed Payer and Bank B is the Floating Payer, with the net payment due every three months. The subject swap terminates on December 31, 2010. The Floating Payer’s leg of the swap is based on the three-month LIBOR rate and the Fixed Payer’s leg of the swap is fixed at 3.5%. Interest payments are calculated on the basis of dividing actual days by 360 (“Act/360”). 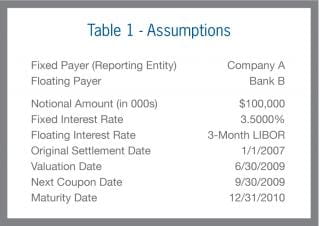 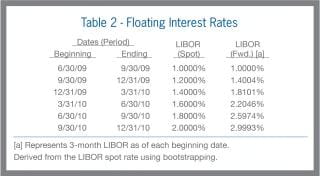 The rate of return utilized to discount the projected future cash flows is estimated based on the current LIBOR spot rate yield curve, adjusted for the credit risk associated with the instrument (i.e., a credit valuation adjustment, or “CVA”). The CVA is required to satisfy the nonperformance requirements of FASB ASC 820. For derivatives that are liabilities, the credit risk of the reporting entity must be taken into account, and for derivatives that are assets, the credit risk of the counterparty to the transaction is utilized in the valuation.

In this example, because the fixed payments exceed the floating payments, the reporting entity (Company A) is in a net pay position in all future periods. Thus, the determination of the present value factor should only consider a CVA related to Company A’s credit risk, as illustrated in the table below. 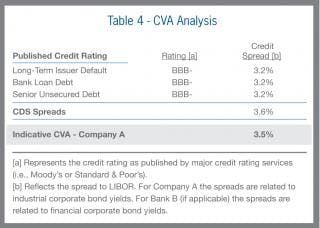 To determine the present value discount factor, the CVA is added to the LIBOR spot rate as shown in Table 5. Note that the CVA is only applicable to the counterparty in the net pay position (i.e., the Fixed Payer) for which nonperformance risk is being measured. 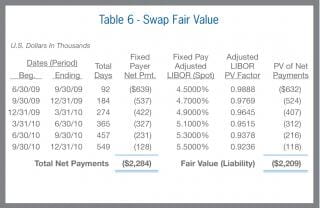 While it may initially seem counterintuitive, a reporting entity that has a net liability position may actually report a gain in the event that its credit quality deteriorates between reporting periods. This is because decreasing credit quality likely results in a higher CVA for that entity, which has the effect of lowering the liability, all else being equal. Of course, the opposite is also true in the event that the reporting entity’s credit quality improves whereby the liability would increase and a loss would be recognized.

The valuation of interest rate swaps requires consideration of multiple variables. Given the current credit environment, certain assumptions must be made that require intimate knowledge of the marketplace, particularly when determining the nonperformance risk of the counterparties. While the example presented herein specifically relates to interest rate swaps, the nonperformance risk analysis has broad application in the current financial reporting environment as the rapid decline in macroeconomic conditions has significantly impacted the creditworthiness of a broad base of companies counterparty to such agreements. 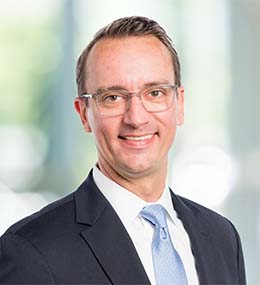 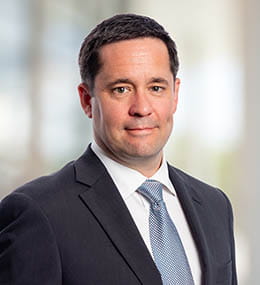