Rule 144A and the Imaginary Market in Restricted Stocks

Rule 144A and the Imaginary Market in Restricted Stocks

In the gift- and estate-tax world, valuation analysts often rely on transactions in restricted stock to determine the appropriate discount for lack of marketability applicable to a minority interest in a closely held company. In doing so, we first must ask the question — All else equal, should the stock of a company that is not traded in the public market be valued differently than the stock of a company that is? Naturally, we look to empirical evidence in the markets for an answer and find that public companies do sell shares that are, for a limited time, restricted from trading in the public market. Such sales generally occur at a discount from the publicly traded price. The next question then is — What magnitude should that discount be? To answer this question, we need to understand what factors impact the discounts observed in the restricted-stock transactions. This topic has been widely discussed and a multitude of factors have been identified. Generally, these factors fall into the broad categories of holding period, riskiness of the underlying business, and distributions. We will focus on the holding period as it relates to Rule 144.1 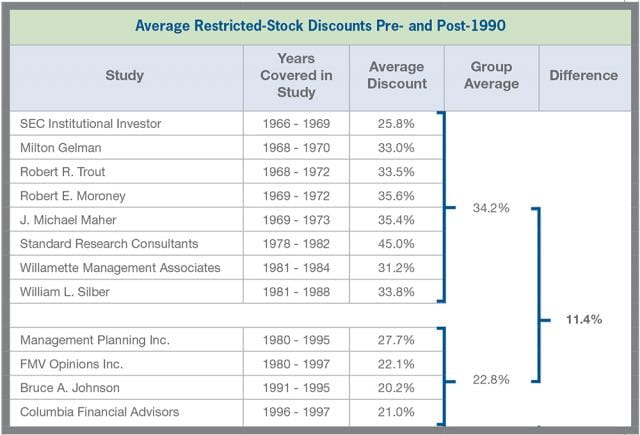 We have often observed the argument that, in 1990, when Rule 144A was adopted, it created a limited market for restricted stocks by allowing such stock to be bought and sold between institutional buyers. Furthermore, some analysts have argued that the difference between the discounts observed in the pre-1990 transactions and post-1990 transactions (about 11% to 12%, depending on which studies are considered) reflects the pure discount for lack of marketability and that any discount observed in the post-1990 transactions is due to factors unrelated to marketability. In the Holman case, for example, the Tax Court adopted a 12.5% marketability discount based on a similar analysis presented by the valuation expert retained by the Internal Revenue Service (IRS).2

However, these arguments are flawed. The market for restricted stocks created by Rule 144A is more imaginary than real. There was no more of a market for shares of restricted stock of U.S. corporations after the passage of Rule 144A than there was before its passage. In an extensive article entitled “The Birth of Rule 144A Equity Offerings,” William K. Sjostrom Jr., Associate Professor, Salmon P. Chase College of Law, Northern Kentucky University,3 reviews the evolution and history of Rule 144A as it relates to restricted stocks of U.S. corporations. In his article, Mr. Sjostrom notes, “the Commission adopted Rule 144A in 1990 to spur further development of the U.S. private placement market…The chief innovation of Rule 144A was to decrease this illiquidity discount by providing institutional investors a regulatory avenue for the immediate resale of privately placed securities. While the resulting Rule 144A private placement market started off slowly, it has since exploded. NASDAQ estimates that over $1 trillion of debt and equity capital was raised in 2006 through 144A offerings, reflecting a 300% increase since 2002.”

Importantly, Mr. Sjostrom then qualifies his comment. “Combining debt and equity capital into one figure is somewhat misleading in that it gives the wrong impression as to the size of the equity capital component. In fact, the overwhelming majority of capital raised under Rule 144A consists of debt because Rule 144A’s “non-fungibility” condition generally prevents U.S. public companies from undertaking Rule 144A equity offerings. Foreign firms, however, have routinely relied on Rule 144A to issue equity in the U.S.”

This rule change had the effect of potentially advancing the date when the shares of restricted stock could be sold in the open market, thus shortening the holding period relative to what the rule required prior to 1990. This, in turn, served to significantly increase the liquidity of the restricted shares, which caused the average discounts in the studies covering the years subsequent to 1990 to decline from 34.2 percent to 22.8 percent. The rationale for the decline in the mean discount for lack of marketability between the two sets of studies is not due to the creation of a limited market, but rather the change in effective holding period.

In addition, in 1990, the Commission also eliminated the provision that previously tolled (or suspended) the holding period of the holder engaged in short sales, puts, or other options to sell the securities. This, however, is generally not viewed as impacting the decline in the mean discount significantly. It has been noted that such hedging transactions are practicable mostly for highly liquid stocks, where publicly traded options are available and/or short selling is possible. Prime candidates for such transactions are companies with market capitalization in excess of $500 million and companies whose stock trades relatively actively, more than 100,000 to 200,000 shares per day. The majority of companies in the published restricted-stock studies are not large and liquid enough to be good candidates for such hedging or sale transactions.

In conducting an analysis of restricted stock studies to determine the appropriate discount for lack of marketability applicable to a minority interest in a privately held company, it is necessary to compare and contrast the attributes that impact the magnitude of those discounts between the subject interest being valued and the subjects of the restricted-stock studies. By having a thorough understanding of the holding period restrictions and other illiquidity attributes impacting the empirical data, an analyst can be better prepared to rebut an unsupportable position presented by the IRS and provide reliable conclusions.