Over the past decade, rapid and substantive changes to generally accepted accounting principles (GAAP) in the U.S. have generated a fierce debate regarding the accounting practices for public and private businesses alike. In particular, a growing consensus argued that the financial reporting needs of private companies are sufficiently different from those of public companies, warranting an accounting alternative for private companies. This debate ultimately resulted in the formation of a new group, the Private Company Council (PCC), which, in collaboration with the Financial Accounting Standards Board (FASB), is charged with developing, deliberating, and voting on proposed exceptions or modifications to U.S. GAAP. Upon the FASB’s endorsement, the exceptions or modifications became incorporated in U.S. GAAP.

This article highlights amendments to U.S. GAAP resulting from PCC consensus opinions and resulting FASB endorsements, including accounting for goodwill and accounting for identifiable intangible assets in a business combination, as well as implications to preparers and users of financial statements.

What Is a Private Company?

Overview of the PCC

Formed in 2012 by the Financial Accounting Foundation (FAF) Board of Trustees, the PCC has two principal responsibilities. First, the PCC determines whether exceptions or modifications to existing nongovernmental U.S. GAAP are required to address the needs of users of private company financial statements. Second, the PCC serves as the primary advisory body to the FASB on the appropriate treatment for private companies for items under active consideration on the FASB’s technical agenda.

The PCC is the product of prior working groups, committees, roundtables, and solicitations of input dating back to 2006. In connection with the formation of the PCC, the FAF’s outreach included the receipt of 7,367 comment letters, four nationwide roundtable discussions with 60 stakeholders, and a webcast that included 316 participants.

The first PCC consensus opinion and resulting FASB endorsement was completed in January 2014, culminating in Accounting Standards Update (ASU) 2014-02, which amends Accounting Standards Codification (ASC) Topic 350, Intangibles — Goodwill and Other (ASC 350”) (the “Goodwill Accounting Alternative”). During its research and outreach efforts, the PCC obtained feedback from private company stakeholders that the benefits of the current accounting for goodwill after initial recognition do not justify the related costs as it pertains to the usefulness of the carrying amount and potential impairment losses, as well as the cost and complexity in performing the current goodwill impairment test.

The main provisions of the Goodwill Accounting Alternative, if elected by a nonpublic entity, are outlined below and contrasted against the “general” accounting guidance in the following table. 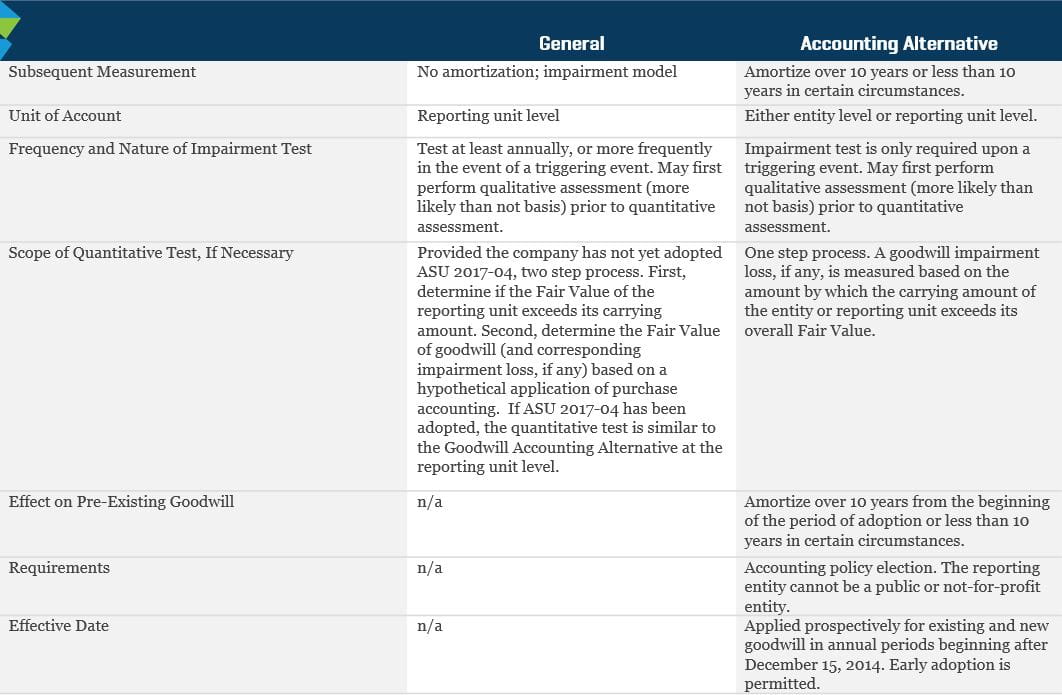 Accounting for Identifiable Intangible Assets in a Business Combination

The main provisions of the Intangibles Accounting Alternative, if elected by a nonpublic entity, are outlined below and contrasted against the “general” accounting guidance in the following table. For entities that adopt the Intangibles Accounting Alternative, the amendments to ASC 805 will generally result in those entities separately recognizing fewer intangible assets in a business combination compared to entities that do not elect or are not eligible for this option.

Additionally, in circumstances in which the primary customer-based intangibles are relationship-based in nature, and these customer relationships would meet the exclusion criteria of the Intangibles Accounting Alternative, we have noted an emphasis on recognition of the corresponding customer information (e.g., name and contact information) by certain audit firms. To this end, care should be exercised in evaluating whether such customer information could in fact be sold or licensed separately from the other assets of the business, or if the quantity and quality of the customer information would in fact be materially valuable to a market participant. The per-customer value of contact information is typically vastly lower than an ongoing business relationship, and often selling or licensing such information could irreparably damage the target’s relationship with the end customer. Additionally, there are often legal restrictions on selling or licensing such information. As an example, RadioShack's recent bankruptcy proceedings were challenged primarily due to the inclusion of more than 13 million e-mail addresses and 65 million customer names and physical address files in the sale. Prior to its bankruptcy, RadioShack’s privacy policy (displayed in RadioShack stores) stated: “We pride ourselves on not selling our private mailing list.” State law in Texas prohibits companies from selling personally identifiable information in a way that violates their own privacy policies. AT&T also challenged the sale of customer information on the basis that the information was not RadioShack’s to sell. The sale of RadioShack was ultimately completed in May 2015, but only after an agreement to limit its customer e-mail information to the last two years, and to allow access to only seven of the 170 fields of customer data.[2][3] 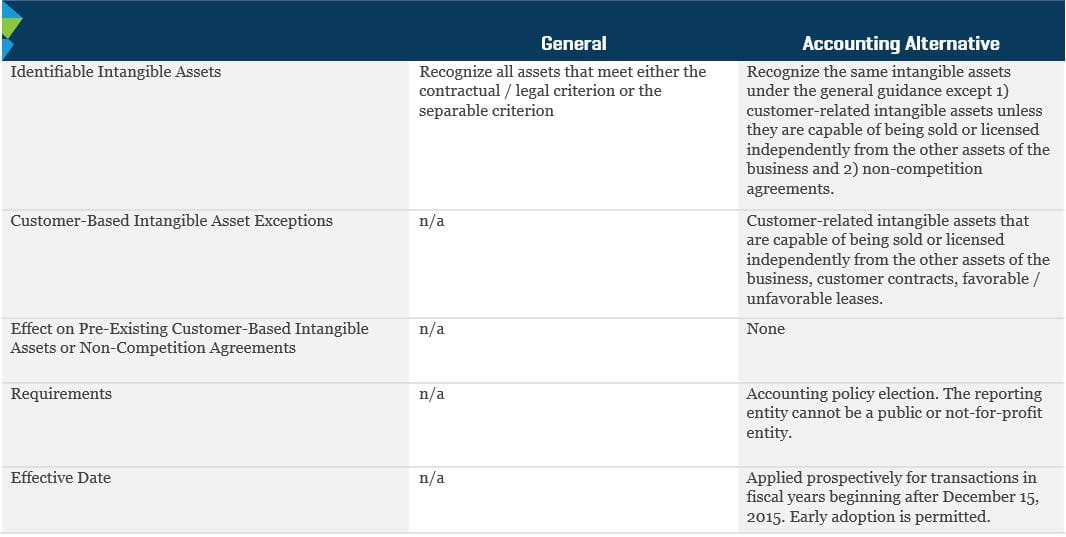 In January 2015, the CFA Institute — whose membership is comprised of investment professionals — published the results of a survey of its members in May 2014 titled “Addressing Financial Reporting Complexity: Investor Perspectives” (the “2014 Private Company Survey”).[4] In the view of the CFA Institute, outreach by the FAF to private company stakeholders was undertaken largely at the behest of the preparer community as it argued for changes in reporting requirements aimed at reducing preparer compliance costs. The CFA Institute contended that the perspectives of investors were missing from the discourse. The 2014 Private Company Survey sought investor insights on the impact of separate nonpublic company reporting requirements on investors’ financial analyses, how investors view extending such reduced requirements to public companies, and their perspectives on efforts related to changes in public company requirements.

New accounting and reporting options are now available to nonpublic business entities. While these alternatives may serve to decrease compliance costs and simplify reporting requirements, businesses that meet the criteria required to apply these accounting alternatives must carefully weigh the current and future costs and benefits of these amendments to U.S. GAAP, including the costs of compliance, a future transition to a public business entity, and the perspectives of its various stakeholders.

A previous version of this article was published in September 2015.