Assessing the fair value of software-as-a-service companies, particularly in their early stages, is a complicated task, but this metric can help.

A competent valuation expert with industry expertise can navigate these challenges to produce a supportable and reliable valuation. One industry metric that provides helpful insights and potentially a rough, high-level estimate to corroborate the necessary assumptions supporting a valuation is the “Rule of 40” (Figure 1).

Put simply, the Rule of 40 takes the latest one-year revenue growth rate plus the same period earnings before interest, taxes, depreciation, and amortization (EBITDA) margin as a barometer of a company’s performance. Revenue growth can be generally accepted accounting principles (GAAP) revenue or bookings, provided that EBITDA margins are calculated using the same revenue metric. The basic concept implies that SaaS companies with revenue growth plus margins at or above 40% should trade at higher multiples than those below 40%.

Figure 2. Company Valuations per the Rule of 40

How can Company A, which is still growing at a double-digit rate with positive margins, trade at a lower multiple than Company B, which is incurring significant losses? The underlying implication of the Rule of 40 is Company B’s level of spend and expected growth generated from that spend will produce higher returns for Company B versus the same relationship for Company A. Therefore, investors would be willing to pay more for the opportunity, resulting in a higher multiple.

To test the relevance and explanatory power of the Rule of 40, we identified a set of 50 publicly traded SaaS companies (SaaS Data Set).[1] Figure 3 illustrates the SaaS Data Set revenue multiples compared with the derived Rule of 40.

Figure 3. Rule of 40 to Revenue Multiple

Taking the concept a step further, we investigated whether adjusting the Rule of 40 for S&M and R&D expenses might provide a tighter regression fit (Figure 4). Here, the underlying premise is that higher levels of S&M and R&D expenses may result in lower current EBITDA margins, but higher future revenue growth as the investment fuels opportunities. In other words, higher costs today will help build the customer base and product offering that fuels growth, and ultimately, higher cash flows in the future.

Figure 5. Rule of 40 Plus S&M and R&D to Revenue Multiple 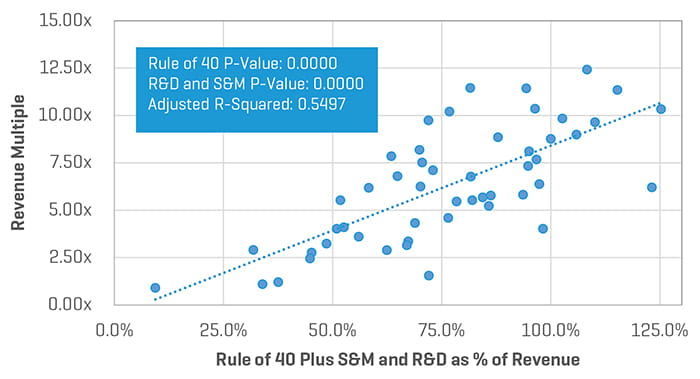 As with any industry metric/calculation, the Rule of 40 is certainly not the Holy Grail that should replace a thoughtful professional valuation. Still, the Rule of 40 (with or without the S&M and R&D modifications) may be used as a guidepost to assist in supporting the overall reasonableness of a valuation conclusion. 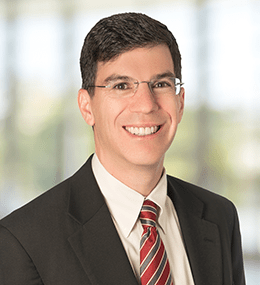