This year could be shaping up to be one of strong going-private deal activity. Over the past several years, the volume of going-private transactions in the U.S. has been fairly steady. However, activity may be on the rise as a result of several factors. Effective August 1, 2013, the new Section 251(h) of the Delaware General Corporation Law (“DGCL”) will help ease and accelerate the closing of going-private transactions under the two-step merger approach. Moreover, merger and acquisition (“M&A”) conditions are currently favorable due to resilient debt markets, the significant capital overhang in the private equity (“PE”) sector, corporate balance sheets that are flush with cash, and a recent increase in confidence among business owners. Combined, these dynamics may lead us to see an increase in go-private transactions this year and beyond.

Go-Private Transaction: What Is It and Why Do It?

Public companies are subject to stricter regulations, higher reporting standards, and greater scrutiny in comparison to private companies. However, public companies have the option to “go private,” which refers to the transition of a publicly traded company to private governance by means of an acquisition or other corporate action that reduces the number of shareholders below the requisite threshold for registration with the U.S. Securities and Exchange Commission (“SEC”) (generally fewer than 300 shareholders, or fewer than 500 shareholders where the company does not have significant assets). By going private, the company’s shares are delisted from any formal securities exchange, it ceases to be registered with the SEC, and it is generally exempt from filing periodic financial and other reports with the SEC. The going-private process can take a variety of forms, such as a third-party takeover/merger, reverse stock split, two-step tender offer, or a buyout the public shareholders initiated by a controlling stockholder.

Why go private? There are many reasons this may be the right strategic decision for an existing public company. However, the most common reasons deal with reporting burdens and value assessments. A going-private transaction enables the company to eliminate costs, both legal and economic, of being a publicly traded company, such as complying with SEC reporting requirements and certain provisions of the Sarbanes-Oxley Act that apply to public companies. This removes periodic disclosure obligations and inflexible corporate governance requirements. In the absence of public scrutiny, management can shift its focus from the short-term earnings expectations of Wall Street analysts to longer-term value creation efforts, and will also no longer have to worry about disclosing information in public filings that could inadvertently provide an advantage to the company’s competitors. Moreover, as is the case with many smaller public companies, the company may have little or no research analyst coverage and its shares may be relatively illiquid and infrequently traded, which reduces the company’s ability to raise capital through a currency (a typical advantage of operating as a public company). Finally, the go-private transaction also provides an opportunity to return capital to the public shareholders at a premium to the then current trading price.

How to Effect a Go-Private Transaction

Once a public company decides to pursue a go-private transaction, there are a few types of transaction structures to consider, depending on the circumstances. A one-step merger, or “cram down” transaction, is a buyout of the unaffiliated public shareholders that is initiated by an existing controlling shareholder.1 A one-step merger may also take the form of a private equity fund working with management to gain control. Although it can often be completed with greater certainty, many times this type of go-private transaction can prove challenging and risky to the acquirer given certain unavoidable conflicts of interest that may arise.

A go-private transaction may also be organized as a reverse stock split initiated by the company. Under a reverse stock split, the company’s shareholders vote to reduce the number of shares outstanding by “splitting” the existing shares and purchasing any fractional shares that may result, effectively squeezing out smaller shareholders. If this reduces the total number of shareholders to below 300, the company can then delist its shares and eliminate its SEC reporting requirements essentially going dark.

Finally, a go-private transaction may take the form of a two-step tender or exchange offer. In this type of transaction, the supposed acquirer first launches a tender offer for the outstanding shares of the target. Once the acquirer accumulates a controlling interest in the shares, it then purchases any remaining shares that were not tendered by way of a second-step merger. Under prior Delaware law, a “short-form” merger pursuant to DGCL Section 253, which does not require shareholder approval of the second-step merger (and therefore does not require a shareholder vote), could be effected following the closing of the tender offer if the bidder acquired at least 90% of the target’s shares. If, however, the bidder acquired sufficient shares to approve the merger, but less than 90%, it would need to utilize a “long-form” merger to complete the deal. This cumbersome process required approval by the target’s board, the mailing of a proxy statement to the target’s shareholders (triggering the cost and delay of the SEC’s proxy review process), and the scheduling of a stockholder meeting to approve the merger. Since the bidder presumably already held a sufficient number of shares in the target following the first-step tender offer, the approval of the merger at this point was, to be fair, a fait accompli. However, it still required considerable time to complete—it can take up to four months to convene the stockholder meeting—and additional expense to the company. The new Section 251(h) amendment to the DGCL was enacted in August 2013 to help streamline this process. Specifically, if certain conditions are met, Section 251(h) eliminates the need for a stockholder vote to approve the deal following a public tender offer where a sufficient number of shares have been tendered to otherwise approve the deal (50.1% of the shares under Delaware law or a greater percentage if required by the company’s charter). This significantly reduces the time (and associated expense) to execute a two-step tender offer to as little as 20 business days under the SEC’s tender offer rules. It should be noted that Section 251(h) is only available for use in connection with third-party acquisitions. As such, no party to the deal may be an “interested stockholder” as defined in the DGCL. In addition, the target corporation’s shares must be listed on a national securities exchange or held by more than 2,000 shareholders of record in order for Section 251(h) to apply. However, as of February 2014, there were more than 3,700 U.S.-domiciled companies listed on the major American stock exchanges (NYSE, NASDAQ, and AMEX), and just over 1,000 of these, or more than 25%, and one or fewer research analysts covering them. Further, nearly 500 of these businesses, or more than 10%, had no analyst coverage whatsoever. Thus, there appears to be an ample number of acquisition candidates that may be able, and willing, to take advantage of the new rules to go private.

Going-Private Activity – 2013 and Beyond

The recent changes to the DGCL may spur increased going-private activity by streamlining the two-step tender offer process and giving a potential acquirer the ability to close a deal in a significantly shorter time frame. Moreover, current market conditions provide a favorable environment for both strategic and PE buyers to pursue go-private transactions. M&A activity in the United States was stronger in 2013, with over $1.0 trillion of announced M&A deals.2 In total, M&A volume was up 14% in 2013 compared to 2012.3 PE deal volume also picked up at the end of 2013. In the third quarter of 2013, 489 PE deals closed, representing a 16% increase over the second quarter of 2013.4 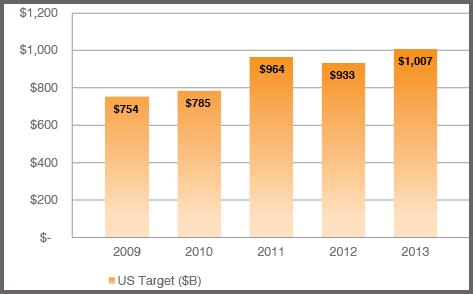 Moreover, although PE deal activity has picked up recently, the fact that there was a large amount of capital raised by PE funds prior to the financial crisis, followed by significantly lower investment activity during and immediately after the crisis, has resulted in billions of dollars in remaining “dry powder” in the sector. This represents capital that has been committed to PE funds that has not yet been called by such funds to complete an acquisition. At the end of 2012, there were more than $50 billion of funds that had been raised during 2007 and 2008 that had yet to be deployed. Typically, committed capital is at risk of being forfeited if such capital has not been called by the time a fund reaches the end of its five-year initial investment period. With billions of dollars that is still available to be put into play, the funds with excess capital may seek to engage in larger transactions in order to employ this capital to invest, setting them up as well-suited investors in a go-private transaction.5

Also of note, 2013 proved to be a year of strong PE activity involving publicly traded companies. In the third quarter of 2013 alone, $4 billion of the $9 billion of completed PE deals involved public-to-private transactions.6 Further, the $23 billion acquisition of H.J. Heinz and the $24 billion acquisition of Dell announced in 2013 are larger than all of 2012’s sponsor-backed going private deals combined.7 2013 marked the first post-financial crisis year with M&A deals at such levels.

Finally, the robust financing markets also proved to be a positive influence on M&A activity in 2013. Debt markets have remained strong, with high leverage multiples and low interest rates, and are driving increased valuation levels. Investor confidence is also on the rise—as evidenced by the significant run up in the stock markets in 2013. Looking ahead, many of these market factors are expected to persist throughout 2014. 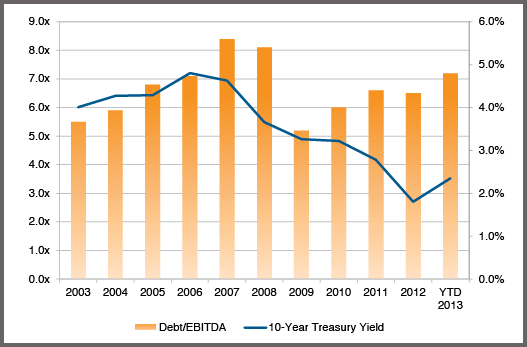 With the persistence of favorable financing markets and the DGCL Section 251(h) amendment paving the way for more tender offers, strategic acquirers and PE sponsors (particularly those with significant levels of dry powder) may be poised to take advantage of the new rules to effectuate a go-private transaction in a much more streamlined manner. As such, many acquirers who had previously strayed away from go-private deals—given the often long and complicated transaction process—may be more inclined to pursue one in order to put excess capital to work. Moreover, the enhanced certainty and reduced time to closing of the public two-step tender offer process may facilitate the procurement of acquisition-related financing for leveraged deals (such as nearly all PE deals). It should be noted, however, that while Section 251(h) streamlines the acquisition process, the amendment does not change the fiduciary duties of the target company’s directors in connection with such mergers or the level of scrutiny that a court may apply in reviewing such a transaction. In addition, all deals that invoke Section 251(h) must still provide for appraisal rights for dissenting stockholders under applicable provisions of the DGCL.