The restructuring of debt has become a common trend in recent periods due to the continuing economic downturn. Many lenders are currently faced with the prospect of restructuring existing debt arrangements in an effort to prevent bankruptcy for the borrower (thereby protecting their investment in the borrower). This situation is particularly prevalent in the private equity arena, where highly-leveraged portfolio company investments are customary. Debt restructuring poses a number of income tax challenges and resulting valuation concepts that can have a real dollar impact for a firm.

If a company repurchases (whether through a restructuring/recapitalization event or other means) its existing debt at a discount, the company is required to recognize cancellation of debt (“COD”) income in the amount of the discount pursuant to Section 108 of the Internal Revenue Code (“Section 108”). The recognition of COD income essentially equals the economic improvement in the borrower’s position following the restructuring event. Consider the following example:

COD income is not always recognized in a company’s gross income. Rather, there are a number of exceptions to the recognition requirement under Section 108, as follows:

However, it is important to note that in most instances COD income impacts a company’s tax position whether or not any income is actually recognized. According to Section 108, COD income reduces the following tax attributes of a taxpayer, in the following order: 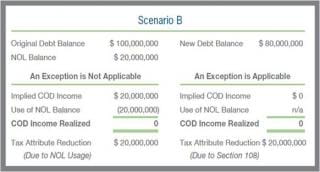 To exemplify the tax attribute concept, consider Scenario B above. If one assumes that the $20 million of COD income is recognizable, the company may be able to use its existing NOL carryover balance of $20 million against the income, thereby reducing the actual realizable COD income amount to zero. If it is determined that the $20 million of COD income is excluded from gross income (due to one of the aforementioned exceptions), no income is realized; however, the company’s tax attributes (e.g., NOL carryover balance) are still reduced by $20 million according to Section 108.

One of the most common Section 108 exceptions to the recognition of COD income is the insolvency exclusion, particularly in today’s economic environment. Section 108 defines “insolvent” to mean that there is an excess of liabilities over the fair market value of assets. Section 108 also provides that the amount by which the taxpayer is insolvent shall be determined on the basis of the taxpayer’s assets and liabilities immediately prior to the indebtedness discharge. Moreover, the amount of COD income excluded due to this exception shall not exceed the amount by which the taxpayer is insolvent.

Given that the determination of insolvency is based on an estimation of the fair market value of a company’s assets, a valuation of the company is a critical element. The valuation should consider the concept of “highest and best use” (i.e., are the assets more valuable under a going concern or liquidation basis). Under a going concern premise, an income-based and/or market-based approach is often utilized to estimate asset value, while an asset-based approach is more common under a liquidation premise.

Once the fair market value of the assets is determined, the company’s level of insolvency is assessed and netted against recognizable COD income. Consider the example below.

Under Scenario C, a valuation is performed and it is determined that the fair market value of the company’s net assets is $80 million (i.e., assets of $230 million less operating liabilities of $150 million). Subtracting the company’s indebtedness (prior to the restructuring) from this amount yields a negative equity value of $20 million, implying that the company is insolvent by $20 million. Since the company is also improving its debt position by $20 million under Scenario C, the implied COD income amount is $20 million. Netting the insolvency amount from the implied COD income amount yields a realizable amount of COD income of zero.

Estimating the amount of COD income from a debt restructuring is not always a straightforward exercise. Many lenders are reluctant to simply reduce the amount of debt outstanding. Rather, lenders are often requiring compensating securities (e.g., preferred stock, warrants, etc.) as added incentive for restructuring existing debt arrangements. The addition of new securities to the capital structure introduces a complex valuation component to the estimation of COD income. Consider the following example:

Under Scenario D, the lender receives 500 shares of preferred stock and 100,000 warrants in addition to the reduced debt balance of $80 million. As such, in order to estimate the economic improvement in the borrower’s position following the restructuring, the preferred stock and warrants must be valued. Given the more complex capital structure of the company post-restructuring, valuation techniques such as the “Option-Pricing Method” or “Probability-Weighted Expected Return Method” as described in the AICPA’s practice aid, Valuation of Privately-Held-Company Equity Securities Issued as Compensation, may be required, particularly if the preferred stock is able to be converted into common equity.

It is important to further note that the borrower’s ability to negotiate certain aspects of the debt recapitalization can play an important role in potential tax strategies. As presented in Scenario D, the market value of the “junior” securities (i.e., preferred stock and warrants), which is largely dependent on the negotiated terms of the securities (e.g., convertibility, dividend rate, PIK vs. cash pay, strike price, etc.), can influence the amount of COD income realized.

Additionally, the recapitalized balance sheet can have a meaningful impact on the residual value of a company’s common equity. Specifically, common equity value is substantially enhanced if a company is going to remain a going concern versus a bankruptcy or liquidation scenario since the “life” of the company is being extended. Although this equity value enhancement is essentially extracted from the value of other security classes (e.g., debt holders), other security classes likely still benefit from the debt restructuring due to the company’s improved economic position and avoidance of bankruptcy costs, which could be significant.

American Recovery and Reinvestment Act of 2009

Under the American Recovery and Reinvestment Act of 2009 (also referred to as the stimulus bill and signed into law on February 17, 2009), a company can elect to defer recognition of certain COD income that is realized during 2009 and 2010 under Section 108(i) of the Code. Specifically, if the deferral option is elected, the COD income is required to be initially recognized by 2014 at the latest. However, if a company chooses to do so, the COD income can be recognized ratably over a five-year period (and thus a company could recognize the COD income over the period from 2014 through 2018). Further, in order to qualify for the election, the COD income must result from the forgiveness of applicable debt instruments. These debt instruments include bonds, debentures, notes, and certificates issued by a party in connection with the conduct of a trade or business.

In essence, this new tax provision assists companies that are conducting restructuring activities by enabling them to more easily adjust the amount of debt capital recorded on their balance sheet (i.e., they are not immediately encumbered with an additional tax liability related to the COD income). From a tax strategy perspective, however, there can be advantages and disadvantages to deferring recognition of COD income. For example, if a company anticipates that its overall effective tax rate will increase in the future, it may be more advantageous to decline the election to defer COD income recognition.

Finally, as noted above, Section 108 details several exceptions to the requirement that COD income be recognized upon a company’s cancellation of debt. In certain instances, a company may be able to choose to either (i) Recognize COD income and make a deferral election (which does not require the company to reduce any tax attributes) or (ii) Utilize an existing exception under Section 108 (which requires the company to reduce tax attributes). As a result, a company must carefully consider the benefits and detriments resulting from making the election to defer COD income when faced with this situation.

1 Any tax discussion contained in the body of this article is not to be considered tax advice and is not intended or written to be used, and cannot be used, by the recipient for the purpose of avoiding penalties that may be imposed under the Internal Revenue Code or applicable state or local tax law provisions.