Competitive gaming has some big hurdles, like turning a profit. But its long-term health appears bright.

It’s difficult to scroll very far in your preferred news source these days without coming across an esports headline. Many prominent individuals and investment funds are making waves by investing in esports, also known as multiplayer video games.

Among those sprinkling some investor stardust on the industry are former baseball player Alex Rodriguez, Ted Leonsis (the National Basketball Association and National Hockey League franchise owner) and the venture capital firm Accel Partners. That’s drawn significant attention to this expanding subculture. Profitability remains an afterthought, and challenges abound – not the least of which are viable wages for a growing player base. But our outlook for the long-term health of the industry is increasingly bright as revenue streams become more diverse, league formation takes shape and esports awareness compounds.

Consider that in 2018, there were 737 major esports events across titles such as League of Legends, Counter-Strike: Global Offensive and Dota 2, according to Newzoo, an esports analytics firm. While they have been hosted in traditional sports stadium atmospheres, most are commonly viewed online and occasionally on network television. Some of the most popular have sold out venues like Madison Square Garden and the Staples Center. The demand has prompted the construction of stadiums built specifically for esports, including a $10 million, 1,000-seat stadium in Arlington, TX.

It wasn’t always that way. In years past, esports leagues and events lacked the organization and structure necessary for the industry’s revenue streams to take root. Some big impetuses for change came in 2017, when two of the industry’s most established games, Overwatch and League of Legends, formed league structures and franchise systems designed to promote stability – encouraging steps that could prove to be a landmark inflection point. Furthering the franchising momentum, in early 2019 word leaked that the Call of Duty World League plans to rollout a franchise system.

The global esports audience is expected to reach 453.8 million in 2019, and the number of esports enthusiasts (those who watch esports content more than once a month) will grow to approximately 201 million in 2019, up 16.3% from 2018, according to Newzoo. The majority of participants watch esports online, primarily via Twitch, a streaming website predominantly used for video gaming. However, Twitch is not a niche platform. The company was purchased by Amazon for $970 million in 2014. And in 2016 Twitch boasted that its average viewer watched more programming per month than the typical YouTube user (421.6 minutes per month versus 291 minutes), according to TechCrunch.

Furthermore, Twitch has a larger audience than many other competing sources of entertainment, as shown in Figure 1. And the worldwide esports industry claims a comparable audience size to domestic traditional sports leagues, which have predominantly U.S.-based audiences, as shown in Figure 2.

That outlook has sparked large distribution transactions. In 2018, Twitch agreed to pay more than $90 million for two years of Overwatch League distribution rights, and Facebook inked a deal to stream Counter-Strike: Global Offensive content, although the amount it paid remains unknown. Also in 2018, ESPN announced that its premium streaming service, ESPN+, will broadcast the North American League of Legends Championship Series, voiding BAMTech’s seven-year, $300 million deal for the rights.  Last, for the second straight year, the Overwatch league will air across the Disney platform, with select programming scheduled to air on ABC.

There’s a reason for all the deal-making excitement: access to the elusive 21 to 34 year-old demographic, whose traditional TV viewership has declined. They make up 65% of esports fans. And another eye candy statistic for advertisers: 43% of fans have an annual household income of $75,000 or greater, according to Newzoo.

But the demo attraction is even more expansive that that: 38% of esports fans are women, and 58% of fans that are aged 25 or older live with children in their household, according to the media agency Mindshare. What’s more, esports is expected to reach an audience of approximately 645 million people by 2022, representing an annual growth rate of 14% from 2017 levels, according to Mindshare, a global media and marketing services company. The extreme popularity of Fortnite, PlayerUnknown’s Battlegrounds and Apex Legends have helped diversify audiences and break negative social stigmas associated with video gaming. Both the industry’s strong Millennial viewership and widening demographic reach provide leverage in negotiating lucrative media rights, sponsorship and advertising deals for the esports industry.

Given all that, it’s not surprising that Walmart announced a partnership with esports venue and production company Esports Arena last November. The retailer is hosting live, in-store events and has launched a new line of gaming hardware. And more than 300 collegiate esports teams have formed, including more than 30 programs offering scholarships to esports athletes, according to the Big Ten Network.

Little wonder that the esports industry is attracting significant investment from private equity and venture capital firms as well as technology and media companies, traditional sports teams and wealthy individuals. Goldman Sachs reported that during the first six months of 2018, $1.4 billion of venture capital has been invested in esports start-ups. It includes Tencent’s two investments in Chinese streaming platforms Douyu and Huya, totaling $1.1 billion. That represents approximately 90% growth over the total amount of funding in 2017. Over the five and a half years prior to June 2018, nearly $3.3 billion had been invested in the esports industry, according to Goldman Sachs (Figure 3). Institutional investors recognize that the industry still has a long runway ahead. Crunchbase reports that 79% of all equity investments in 2016 were Angel or Series A. 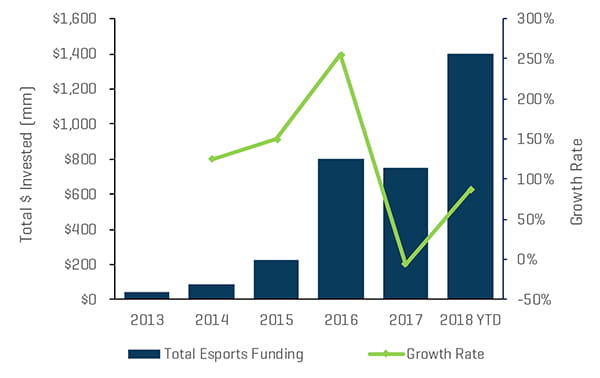 Professional sports franchises and wealthy individuals are among the esport-team investors. In 2016, the Philadelphia 76ers were the first team to jump in, acquiring two esports teams – Team Dignitas and Apex Gaming – for a sum rumored to be between $7 million and $15 million. The 76ers have utilized existing staff to manage the operations of their esports franchises, which operate under the Team Dignitas banner. And, according to Forbes, it has leveraged relationships with the 76ers’ sponsors and may potentially use its arena to host esports events. Additionally, sports moguls Robert Kraft (New England Patriots), Stan Kroenke (Los Angeles Rams) and Jeff Wilpon (New York Mets) have gotten into the esports act – as have retired basketball players Shaquille O’Neal and Magic Johnson.

As revenues grow, esports valuations should continue to rise, and as revenues become more predictable and the industry approaches profitability, traditional valuation methods may become appropriate for esports teams.

Stout research suggests that the esports industry may be further along this progression than originally believed. Two of the industry’s primary income sources, media rights and sponsorship revenues – which collectively represent 64.6% of projected 2019 revenues – are also its fastest growing, expected to grow 41.8% and 34.3% in 2019, respectively, according to Newzoo. Currently, most esports sponsorships have come from companies whose products are used in the industry – for example, Turtle Beach, a gaming headset manufacturer. In fact, European Sponsorship Association’s analysis of the sponsors of the most popular esports teams and events shows that approximately 88% of teams and 65% of events are sponsored by this sort of endemic brand.

But brands that have no direct association with esports are likely to join the fold. By cracking the sponsorship budgets of a broader set of companies and increasing exposure on linear and over-the-top media platforms, teams will broaden their fan bases and increase their intrinsic value. Despite the tremendous inroads, esports still faces significant challenges. Primarily, the industry must better monetize its audience. Although audience growth rates far outpace those of traditional professional sports, the typical NBA fan spends over 4 times more than the average esports fan does on merchandise, tickets and subscriptions, according to Newzoo.

There’s one significant reason for that: Nearly all esports competitions are available to watch for free online, discouraging paid participation. However, esports fans are willing to spend money for the entertainment. Esports news website Kotaku reports that video game enthusiasts subscribe to and often donate to (or tip) their favorite streamers on Twitch. (Streamers are people who stream esports games live online.)  In 2017, U.S. esports fans tipped approximately $129 million according to research from Streamlabs and Goldman Sachs, who project that the worldwide tipping market will grow to $372 million by 2022.

As more esports franchises form, industry growth is likely to accelerate. Fan bases will develop around specific teams without fear that their team will be sidelined by a league organizer. As revenue streams grow and become more predictable, the industry will be able to offer a sustainable salary to a larger proportion of professional gamers.

Two of the most established esports titles, League of Legends and Overwatch, have set up franchise systems with permanent league spots. League of Legends teams reportedly feature a revenue-sharing agreement dependent upon team success, split between players (35.0%), teams (32.5%) and the game’s intellectual property owner, Riot Games (32.5%).

Although few gamers earn enough to make a career out of esports today, it is becoming more common. The Wall Street Journal reported that players on the 12 teams in Activision Blizzard’s Overwatch league earn at least $50,000 annually. That excludes health insurance and retirement benefits, as well as tournament winnings, which can raise salaries well into six figures. In contrast with traditional sports team ownership, the economics supporting esports team ownership are far more grounded in economic opportunity. The synergies that exist between revenue streams will continue to entice investors into the speculative but viable esports industry. Although profitability is not in the near term, the economics are beginning to fall into place to facilitate the application of traditional valuation approaches to the esports industry.

At a time when the primary professional sports leagues in the U.S. are dealing with headaches over National Anthem protests, athlete safety, reduced competitiveness due to so-called superteams, pace of play initiatives and aging fan demographics, esports may be burgeoning at just the right time.

SIDEBAR: Media Jumps on the Bandwagon

As global media companies feel the pressure to acquire and curate content that keeps them relevant, they have turned to esports to expand and diversify. In addition to distribution deals, like the agreement by premium streaming service ESPN+ to broadcast the North American League of Legends Championship Series, there have been several other developments: