As players continue to consolidate and increase their competitive edge, the newspaper business is getting a new lease on life.

In recent years, revenue in the newspaper industry has declined at a compound annual growth rate of approximately 6%. And it is forecast to continue to drop at a rate of nearly 5% over the next five year period, according to a June 2017 IBISWorld report, Newspaper Publishing Industry in the US. Yet rumors of its demise have been greatly exaggerated. There are reasons to believe that the sector will continue to adapt and evolve, withstanding the headwinds that have challenged the industry in an increasingly digital world.

Historically, the printed form of a newspaper has been the lifeblood of industry players, generating subscription revenue and driving advertising revenue. Even today, print circulation and print advertising continue to be the largest components of a newspaper company’s revenue. It comprises approximately 70% of revenue, according to the IBIS report. But it is the success of newspaper companies' online platforms that will propel their profitability in the future.

That future growth will come after years of considerable turmoil. As a result of the online disruption, many print papers have been shuttered, and others have moved entirely to the web. Meanwhile, the survivors have continued to consolidate and improve cost structures to deal with declining print subscribers.

Large industry players prepared well for this transition, consolidating large and small papers to better spread fixed costs and gain access to the valuable “eyeballs” that will be the key as their businesses rely ever more heavily on online revenue.

According to statistics published by Dirks, Van Essen & Murray, 2017 was one of the busiest transaction years for newspapers over a 20-year period, with 80 daily newspapers changing hands for a total dollar volume of approximately $348 million. In the January 8, 2018 press release, Murray noted that “buyers are looking for more scale in regions where they own newspapers. It’s become increasingly difficult to operate smaller newspapers on a stand-alone basis.”

Despite the declining revenue figures within the overall newspaper industry, large players continue to generate significant cash flow to help finance the continued transition. As shown in the chart below, the newspaper business’s historical earnings before interest, taxes, depreciation, and amortization (EBITDA) margins have remained fairly steady over the past five years, averaging just over 12%.

In the face of revenue uncertainty, the industry’s ability to maintain margins through cost-cutting initiatives has played favorably in the merger and acquisition market.

Needless to say, consumers’ increasing reliance on digital news sources has led to a decline in print subscribers and daily sales. Increases in newspapers’ digital readers have failed to offset revenue losses. Online advertising is generally cheaper, and the competition for the advertising dollars is fierce.

Future success for newspaper companies will be driven by their ability to adjust to these industry dynamics. And consolidation is one key way for them to succeed.

Following a high-level consolidation and restructuring, the industry’s top four companies (Gannett Co. Inc., News Corp., The New York Times Co., and Tronc Inc.) control over one-third of the total market. And the number of companies in the industry is expected to continue to decline.

Industry competition will continue to change as smaller publications fail or are acquired and other media companies compete for online advertising dollars. 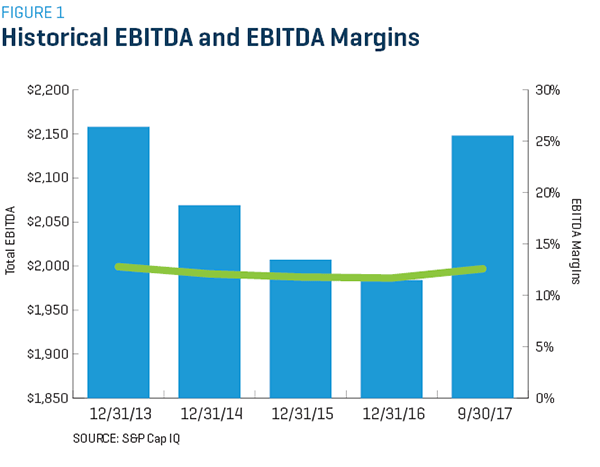 The primary industry drivers, subscribers and advertising, have not changed. However, the shifting composition of these revenue streams and the means of capturing consumer attention impacts the valuation of industry players. The continued consolidation of major players – and their drive to improve cost structures and create operating leverage – will drive the demand (and value) for small to midsize companies. While the changing industry dynamics have made it difficult for smaller papers to stay financially viable, their readers still represent an important component for larger industry players that want to continue to compete in an online world.

As a result, new strategies have come into play. For example, Gannett’s branded its local newspapers as the USA Today Network in an effort to improve quality and costs. Accessing eyeballs is critical to an advertising revenue model so companies will continue to invest in retention and attraction opportunities. And their strategies seem to be paying off. After several years of uneven market performance for the industry, 2017 was a very strong year for some the industry’s larger players. In fact, each of the four largest publicly traded newspaper companies outperformed the S&P 500 during 2017. As shown in the chart below, the top four companies’ market value increased by more than 43% from the beginning of 2017 through the end of January 2018. In comparison, the S&P 500 increased just under 24% during that same period. The improving economy, on top of prior consolidation and restructuring, provided a strong framework for industry leaders and resulted in improved market performance.

Revenue generated by the newspaper industry is expected to continue to decline, but opportunity for value creation still exists within the industry. Online readership continues to increase despite the rise of competition for these eyeballs.

There is still strong demand for brand names such as The New York Times, The Wall Street Journal, and USA Today. These large players have access to journalistic content that cannot be easily duplicated, enabling them to command advertising dollars (both in print and online). This also enables them to generate incremental revenue from “online paywalls,” given to the demand for their content.

In late January 2018, Facebook announced that it would “prioritize” news from trustworthy sources and provide news that people find informative and relevant to their local community. That may be a positive for more established, well known publications that have a history of credible reporting.

Despite a decline in printed advertising, overall advertising will continue to be a significant source of revenue for newspaper companies. In a world where consumer data is increasingly important, newspaper companies have access to some of the best subscriber lists, which can help advertisers reach targeted markets. Further, advertising dollars are generally impacted by corporate profits. With the new tax law and a steady and growing economy, advertising budgets should be available and demand from consumers should be increased by upward wage pressure as the economy continues to grow. Additionally, advertisers generally focus on adults aged 20 to 64, as they represent the portion of the population with the most disposable income. This segment was expected to grow slightly in 2017 according to the IBIS Report. These factors provide an optimistic backdrop for newspaper companies going forward. As mentioned, the challenge for the industry is capturing its share of these dollars. And while print subscribers continue to decline, the revenue generated from this media sector is still significant and can generate the cash flow to support the continued industry transition. 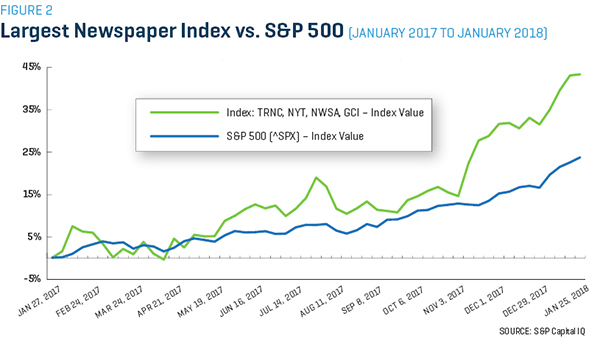