Plastic packaging M&A activity surged during Q2 2017, increasing 64% year over year (YOY) and saw increased activity across a number of processes and all buyer and seller types. Overall, global plastics industry M&A activity declined 9.5% during Q2 2017, YOY, driven primarily by fewer international and cross-border transactions. Despite the decline, the 105 transactions for the quarter were still in-line with the historically high quarterly average achieved over the past several years. Plastics M&A activity in the U.S. remained strong with a 32% increase during Q2 2017, YOY. Solid plastics industry M&A activity, particularly in the U.S. market, is expected for the remainder of 2017 with continued high valuation levels, an abundance of credit and equity capital, and a relatively low cost of capital environment.

Plastic packaging M&A activity increased significantly during Q2 2017, YOY, including an increase across all seller and buyer types and geographies. Medical plastics M&A activity declined 20% during Q2 2017, YOY, although likely due to a scarcity of deal opportunities as there continues to be high demand for medical companies. Automotive and industrial activity, which tends to be more cyclical, was down 56% and 24%, respectively.

M&A activity involving six out of the 10 plastic processes tracked by Stout were flat or up during Q2 2017, including several niche segments such as thermoforming, blow and rotational molding, and prototyping. Within the three largest segments, extrusion was up 29%, while injection molding and resin/compounding were down 32% and 30%, respectively.

Private equity sellers led the charge during Q2 2017 with a 6% increase YOY, including a 67% increase involving domestic transactions. Corporate and private sellers were down 23% and 8% respectively, although activity was up for both for domestic deals. Each of the three buyer types – strategic, financial, and hybrid – saw lower transaction activity during Q2 2017, although when focused just on domestic deals, activity was up 20% YOY, again showing the continued strength of the U.S. market.

Overall stock market performance continued to be at or near all-time highs during Q2 2017 with all major market indices up for the quarter and the first half of 2017. For the first half of 2017, the Dow was up 8.0%, while the S&P 500 and Nasdaq were up 8.2% and 14.1%, respectively. Within the plastics industry, all public company segments continue to maintain relatively high valuation levels, with seven out of eight plastics industry sectors that Stout tracks ending flat or up for the quarter.

Key macroeconomic indicators, including GDP, consumer confidence, unemployment and other metrics remained strong during Q2 2017. Capital markets continue to be favorable for M&A activity and the cost of capital remains relatively low despite recent changes in the fed funds rate. Crude oil and natural gas prices were lower during Q2 2017, declining 14.3% and 18.5%, respectively, during the first half of 2017. Resin pricing in general was flat for the quarter, although up for the year for certain key resin categories. 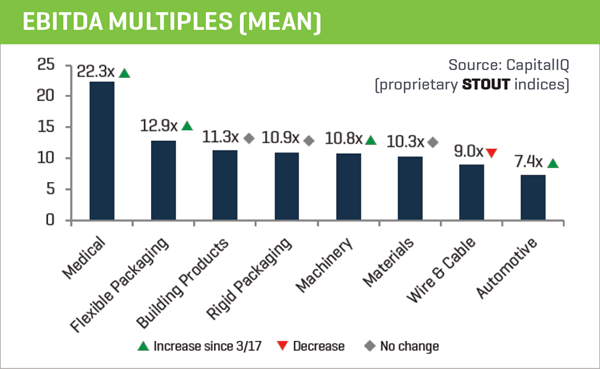