Strong Food & Beverage (F&B) industry M&A activity continued in Q2 2017 with 77 completed transactions during the quarter. This represents a 40% increase year over year (YOY) and a 6% increase year to date (YTD) versus 1H 2016.

Barring any extraneous geopolitical events (e.g. North Korea) we expect the second half of 2017 to be equally strong given 1) valuations remain at peak levels, 2) credit markets are still highly accommodative, 3) strategic buyers are still hoarding cash, 4) private equity’s capital overhang is at or near historical highs, and 5) large consumer goods companies continue to seek to improve margins through divestitures of non-core brands while, at the same time, pursuing innovation through acquisition of healthy, organic, and clean label brands. 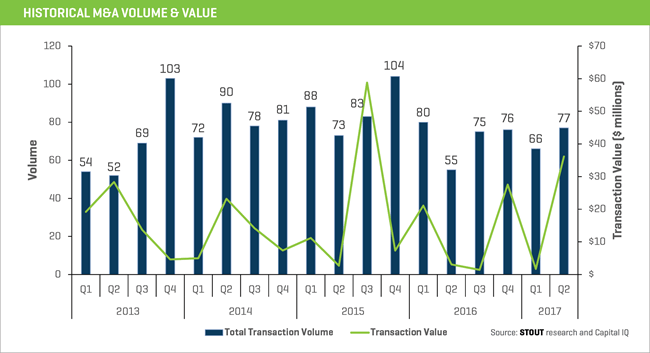 Quantifying the Increase in Valuations

Across all sectors of the economy, we estimate that transaction valuations are one to two multiples of EBITDA higher than just a few years ago, with F&B at the upper end of that range.

We analyzed every F&B transaction with publicly available information over the past four years. We then ran a linear regression against all such data points. This analysis revealed that, as expected, valuations in F&B have increased approximately 2.2x in the past few years. Valuations at these levels are unprecedented.

The past twelve months have been a difficult period for large, publicly traded F&B company stock prices.  Except for Protein (which was itself recovering from a severe dip mid-2016) all subsectors underperformed the S&P while three subsectors (Retail, Packaged / Manufactured, and Distribution) are actually down YOY. The downturn in Retail is clearly a reaction to the recently announced AMZN/WFM transaction while Packaged / Manufactured, in spite of the recent pullback, is still up 54% over the past three years. Distribution is a bit of an oddity as there have been several companies within broadline and specialty distribution that have recently sold between 8-10x EBITDA, which is materially higher than valuations similar businesses would command in a more “normalized” market environment. The decline in our Distribution index is due to company-specific factors among several names in the space (CORE, SPTN, UNFI) as the two largest broadliners (SYY and USFD) are flat-to-up in the past year. Furthermore, the sector as a whole is trading at a very respectable 9.5x forward EBITDA.