Following the “Year of the Recall” in 2014, many in the industry wondered whether the recent increase in recall activity was temporary or the sign of a “new normal” developing in response to industry and regulatory pressures. While the full nature and extent of any long-term transformations in the industry recall landscape remain to be seen, there has certainly been a continuing focus by NHTSA, automakers, the media, and consumers regarding vehicle safety.

Noteworthy Recall News of the First Half of 2015

Further, Fiat Chrysler recently announced a voluntary recall of approximately 1.4 million cars equipped with certain radios due to an issue with potential “software exploitation” to be fixed with a software security patch. The recall includes Dodge, Jeep, Ram and Chrysler vehicles. While Chrysler indicated that no defects had been found, the recall was motivated out of an “abundance of caution.”[5] While not technically occurring in the first half of 2015 or included in the data detailed below, it is certainly worth mentioning as part of recent recall news.

A common theme among the largest recalls observed in the first half of 2015 has been the expansion of previous regional recalls to a broader population of vehicles. In many circumstances, these moves seem to have been influenced by NHTSA’s oversight and enforcement, and the cautious tone of automakers and regulators with respect to potential vehicle safety defects. The short-term trend has been towards an increasing prevalence of broader recalls, even to vehicles that may be less likely to experience the defect.

Stout has continued to analyze the recall data published by NHTSA and has performed a variety of analyses that have been updated through June 30, 2015 for primary light vehicle manufacturers.[6] Following the unprecedented volume of recalled vehicles in 2014, we were interested to see if this trend has continued through the first half of the year. In fact, as shown below, through June the volume of total recalled vehicles is approximately on pace with 2014.

However, 2015 recall volumes have been significantly impacted by the Takata recall expansions. The chart below includes total vehicles recalled with and without Takata airbag and GM ignition switch recalls in the 2014 and 2015 totals.  When these recalls are removed, the 2015 YTD total appears to be more in line with the highest levels observed prior to 2014 (approximately 20 million vehicles on an annualized basis). 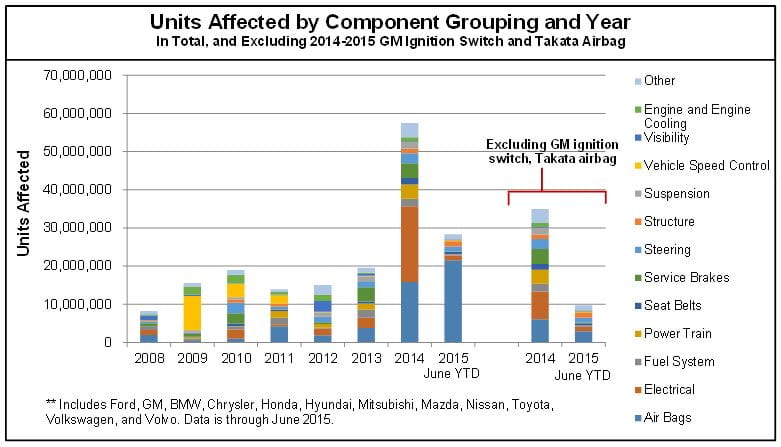 In large part, aside from airbags, there has been no single component group that has dominated the total. However, one trend worth noting is the two-year spike in recalls relating to “Structure” components (such as, body, bumper, doors, hood, lift gates, tailgates and related components). Vehicles impacted by “Structure” related recalls totaled greater than 1.2 million units in 2014, the highest level since 2004. This trend has continued in early 2015, with nearly 1.4 million vehicles already recalled through June. “Structure” related issues have not been limited to only one OEM, as Ford, GM, Chrysler and Nissan have all had greater than 100,000 vehicles recalled across one or more campaigns, while Toyota has had several smaller campaigns. While this may be a seemingly innocuous observation, it may be yet another indication of larger forces at play.

Across other component groups more generally, we have observed a significant and steady rise in recalls relating to “software” related issues as additional technology and “smart” features have continued to be integrated across a number vehicle systems. An upcoming post will share additional detail of our analysis of software-related recalls.

An analysis of recall size through the first 6 months also provides noteworthy observations. Through June 2015, only approximately 20% of recalls have involved 100,000 units or more (the lowest percentage since 2011), down from greater than 27% in 2014. However, the percentage of very small recalls (less than 10,000 units) have also declined to 46.5%, the lowest level since 2010. We have observed a steady rise in mid-size recalls (10,000 to 100,000 units) as in many cases, OEMs seem to be acting cautiously and swiftly to institute recalls for only a small number of recent model years (or subsets of model years) while still keeping the vehicle population relatively broad. Further supporting this trend is average recall size - When excluding the Takata airbag recall expansions from the first half of 2015, the average recall size was less than 90,000 units. On an annualized basis, this places 2015 as the third lowest average in the last 20 years, and the lowest since 2008.

As first detailed in our 2015 Automotive Warranty & Recall Report, we have also continued to monitor the frequency with which suppliers are named by OEMs in 573 disclosures to NHTSA.  As described earlier this year, we had observed a steady and significant increase in the frequency of supplier identification. We noted that this increase correlated with the increased design/ engineering collaboration among OEMs and suppliers, and the increased responsibility being borne by suppliers. As detailed below, supplier identification has only continued to increase, with suppliers being named in the 573 disclosures for over 76% of recalls in the first half of 2015.[7] 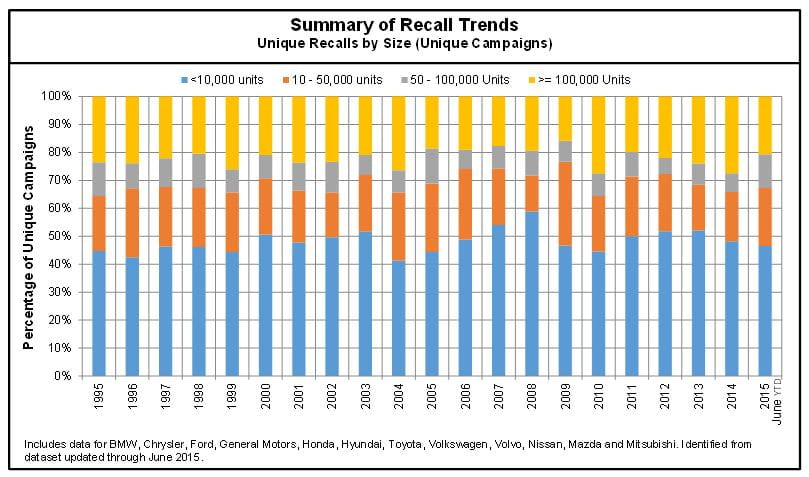 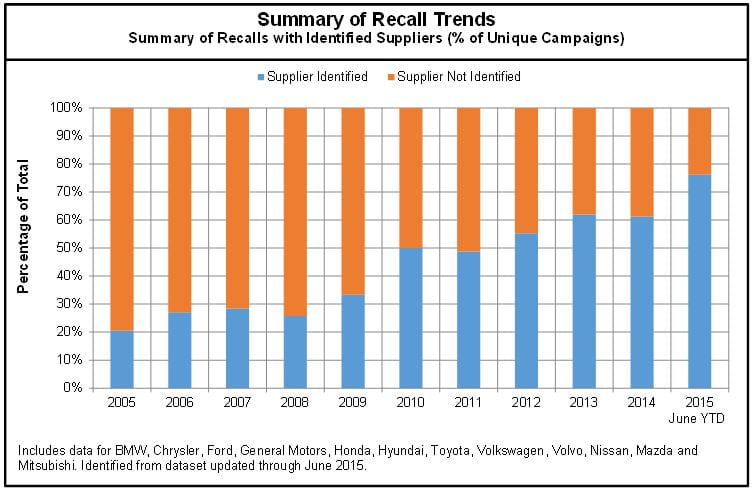 Significant recalls have continued to make headlines in the first half of 2015. The tone in the industry has been characterized by an “abundance of caution” from OEMs and NHTSA. Through June, the volume of recalled units suggests the unprecedented spike in recall activity observed in 2014 has continued into the first half of this year. While airbag related recalls, led by those associated with Takata, have continued to be a prevalent part of the recall landscape, other trends have surfaced or continued. Cautious OEMs are continuing to initiate recalls for a wide range of components that may have been less impacted by recalls in years passed. While the number of recall campaigns has continued to rise, a rising proportion of these are “medium” in size. Further, the notable rise in supplier identification in 573 letters is one worth noting for industry participants throughout the supply chain.

Neil Steinkamp is a Managing Director at Stout. He has extensive experience providing a broad range of business and financial advice to corporate executives, risk managers, in-house counsel and trial lawyers. Steinkamp has provided consulting services and has been engaged for several years as an expert in numerous matters involving automotive warranty and recall costs. His practice also includes consulting services for automotive OEMs, suppliers and their advisors regarding valuation, transactions and disputes.  Mr. Steinkamp can be reached at +1.646.807.4229 or nsteinkamp@stout.com.

[7] It is important to note that when a supplier is named in a 573 letter, it does not necessarily indicate a finding of fault. It simply indicates that the OEM has conducted an investigation and has initiated a recall. However, the actual fact-finding process has just started.