The chart presents for different cost of capital ranging from 5 percent to 25 percent the change in the Capitalization Factor as the constant growth rate increases from -1.0 percent to 10.0 percent. As indicated in the chart, the Capitalization Factor is sensitive to changes in the constant growth rate, and such sensitivity is inversely related to the cost of capital.

The Long-Term Growth Rate of the Economy

In each issue, Financial Valuation and Litigation Expert presents the 10-year forecasts as reported in the Livingston Survey for inflation and real gross domestic product (GDP). In the December 2014 edition, the Survey’s panelists forecasted for the next 10 years that real GDP would grow 2.50 percent annually and that inflation as measured by the Consumer Price Index (CPI) would average 2.25 percent per year.

Congressional Budget Office. The Congressional Budget Office (CBO) is a federal agency within the legislative brand of the United States government that provides budget and economic information to Congress. The CBO’s mandate is to provide Congress with objective, nonpartisan, and timely analysis to aid in economic and budgetary decisions. Each year, the CBO issues The Budget and Economic Outlook, which is CBO’s outlook for the budget and the economy, and a midyear update. In An Update to the Budget and Economic Outlook: 2014 to 2024, the CBO projects that GDP will grow at 3.00 percent per year from 2015 to 2024, and that inflation, as represented by changes in the Consumer Price Index, will increase by 2.34 percent per year from 2014 to 2024.

Office of Management and Budget. Each year, the President submits to the Congress his budget for federal expenditures for the following fiscal year. The Budget of the United States Government contains the President’s budget message, information about his budget proposals, and other budgetary publications. The budget is based on five-year projections of key economic variables developed by the Office of Management and Budget (OMB). The Fiscal Year 2015 Budget of the United States Government was released March 4, 2014 and the Fiscal Year 2015 Mid-Session Review was delivered to Congress on July 11, 2014. The budget was based on economic assumptions available as of late-May 2014. The OMB forecasts that real GDP will grow from 2014 to 2024 at an annual rate of 2.6 percent and inflation, represented by the GDP chained price index, will increase at 2.0 percent per year.

Social Security Administration. Each year the Board of Trustees of the Old-Age Survivors and Disability Insurance program (OASDI or Social Security) are required by law to report on the financial status of these programs. The annual reports are released each year in the spring. The Trustees Report includes projections of annual revenues and expenditures based on assumptions regarding real GDP growth, inflation, and several other economic indicators that are developed by the Office of the Chief Actuary of OASDI. The Trustees Report includes three projected estimates to highlight the range of possible outcomes. These estimates are referred to as Intermediate or Best Guess estimates, High Cost, and Low Cost estimates. The 2014 Annual Report of the Board of Trustees of the Federal Old-Age and Survivors Insurance and Federal Disability Insurance Trust Funds was published July 28, 2014. The chief actuary’s intermediate forecast for real GDP is to grow by 2.7 percent per year from 2014 to 2024 and for the CPI to change over the 10-year period at an average rate of 2.13 percent per year.

Federal Reserve Bank of Cleveland. Each month the Federal Reserve Bank of Cleveland releases its estimate of long-range inflation expectations. These estimates of long-range inflation are based on a model developed by economists at the Cleveland Fed, which combines information from a number of sources. On January 16, 2015, the Cleveland Fed reported its latest estimate of 10-year expected inflation to be 1.66 percent.

In both the Capital Asset Pricing Model and the build-up method, the yield on Treasury bonds is often used as the proxy for the risk-free rate used to determine the cost of capital. The yield on Treasury bonds, also referred to as the nominal interest rate, is comprised of two elements: the expected real rate of interest and the expected inflation rate. The real rate of interest is the return an investor requires in order to forego current consumption for future consumption.

Economic theory holds that the nominal rate of interest should approach the expected overall growth rate for the economy. Therefore, the yield on Treasury bonds should represent the expected nominal growth rate of the economy over a comparable term. For the week ending October 10, 2014, the average yield on the 20-year Treasury bond was 2.82 percent.

The yields on Treasury Inflation-Protected Securities (TIPS) are a source for determining the real rate of interest. The U.S. government first issued TIPS in 1997. TIPS are securities whose principal is adjusted every six months for changes in the Consumer Price Index. The coupon rate on TIPS is constant, but generates a different amount of interest when multiplied by the inflation-adjusted principal.

The Federal Reserve Bank of Kansas City (FRBKC) concurred, noting that if current trends continue, TIPS should become more liquid and the liquidity premium should gradually decline. As a result, the breakeven rate will more closely approximate market inflation expectations. However, the FRBKC cautions that breakeven inflation may never be a perfect measure of expected inflation because both the inflation risk premium and the liquidity premium may still vary over time. The FRBKC advises that to derive the best estimate market expectations of future inflation, one should combine the breakeven inflation rate with other information.

Historical Rates. Some appraisers consider historical rates of inflation and real GDP growth when estimating the economy’s long-term growth rates. For example, in the now defunct Ibbotson Cost of Capital Yearbook, the authors determined the long-term estimate of nominal growth by combining the historical real GDP growth rate with the BEI. The table below summarizes the findings described previously. 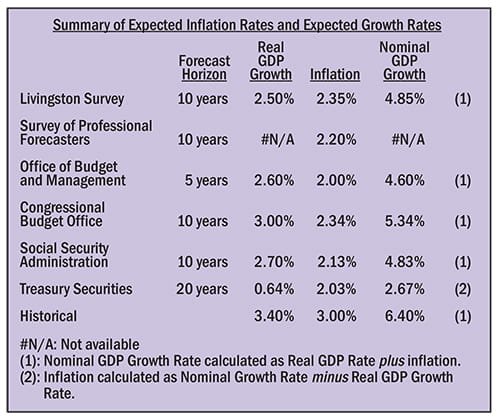 For mature companies in mature industries, it is generally accepted that the constant growth rate will most likely fall between the expected rate of inflation and the expected rate of nominal growth of the underlying economy. The expected inflation rate is considered the floor as it is believed a mature company should be able to increase prices at the rate of inflation even if/when its unit sales are not growing. The economy’s nominal growth rate is considered the cap of the constant growth rate because a company that is growing in perpetuity at a rate greater than the economy will at some point be larger than the economy in which it operates.

Very few companies last forever, as assumed in the Gordon Growth Model. “Over the last 50 years, the average lifespan of S&P 500 companies has shrunk from around 60 years to closer to 18 years.”1 The assumption a company will grow at least at the rate of inflation is valid if the business is profitable and does not have a risk of insolvency2 or some other indicator of a limited life. Examples of businesses with limited lives include solo professional practices and “mom-and-pop” businesses which rely heavily on the owner of the business for generating revenue and most likely will cease upon the death of the owner.

If the temporary high-growth period is expected to extend into the constant growth period, a premium can be added to the economy’s forecasted long-term growth rate to reflect above-average growth in the initial years. However, the amount of premium that can be added is limited. Some commentators suggest that a firm’s perpetual growth rate cannot be more than 1 percent or 2 percent above the economy’s forecasted long-term growth rate because of the sensitivity of the Gordon Growth Model to the constant growth factor.

This article was published in the March 2015 Issue of Financial Valuation and Litigation Expert Newsletter.