In the first half of 2013, private equity (“PE”) fundraising continued to improve in the United States, with year-to-date aggregate commitments up 38% to $97 billion compared to the same period in 2012.1 In addition, PE funds are estimated to be sitting on approximately $350 billion of “dry powder.”2 With available capital increasing, PE financial sponsors may find that good investment opportunities are hard to come by. In this environment, PE financial sponsors are increasingly turning to new deal structures to enhance returns.

An alternative that private equity financial sponsors have begun to consider is structuring transactions in partnership with an employee stock ownership plan (“ESOP”). ESOPs are a type of defined contribution benefit plan designed to use both borrowed money and existing funds to purchase company stock of the employer. Although ESOPs have been around for decades, an increased understanding of the benefits of ESOPs as a corporate finance tool has resulted in PE financial sponsors partnering with ESOPs both as a vehicle for new investments and as an exit strategy for existing portfolio companies.

ESOP candidates in which a PE firm may look to co-invest are companies that could benefit from a corporate culture that encourages employee-led productivity improvements. Target companies with highly compensated and highly educated workforces are also common candidates owing to the need to incentivize employees to “think like an owner”. Since ESOPs are commonly implemented using borrowed funds, an ideal target company should also have a relatively stable level of cash flow and an experienced management team. The PE financial sponsors that have used the ESOP structure recognize that employees are instrumental in creating long-term value for investors.

While it is possible for a selling shareholder to sell 100% of his business to an ESOP and help finance the transaction himself through seller notes, another alternative allows a PE financial sponsor to co-invest with the ESOP to provide the selling shareholder with complete liquidity. Because federal income tax laws permit ESOPs—which are tax-exempt entities—to hold shares of an S corporation, S corporations whose common stock is solely held by an ESOP are exempt from federal income tax. Therefore, one common vehicle for PE financial sponsors to invest in a company through an ESOP structure is in the form of subordinated debt with warrants, leaving the ESOP the sole common shareholder of the target company (which is either an S corporation or would covert to an S corporation in connection with the transaction). While PE investors can realize enhanced cash flows in C corporations through tax deductible, non-cash contributions to the ESOP, the benefits that can be realized with S corporations are much more significant. 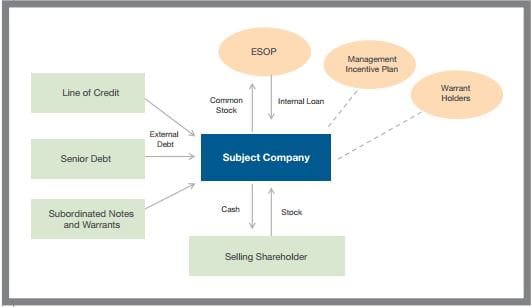 In this scenario, the target company’s balance sheet would be used to borrow funds from a senior lender (as illustrated below), with the PE financial sponsor financing the balance of the total purchase price in the form of subordinated notes with warrants. The proceeds from the senior debt and subordinated debt would be loaned to the ESOP, allowing the ESOP to purchase 100% of the common stock of the target company. The subordinated notes can be structured at a market-based interest rate with a cashless “payment in kind” feature so as not to burden the target company with an onerous level of annual cash interest payments. Once the initial tranche of senior debt used to finance the ESOP transaction has been repaid, the company can obtain additional bank financing to repay the subordinated notes, providing the PE financial sponsor an assured mechanism to monetize its investment.

A warrant is a derivative security that provides the holder the right to purchase securities from the issuer at a specific price (the “exercise price”) within a certain timeframe. However, in an ESOP structure, the most efficient tax strategy is for the ESOP to own all of the common stock outstanding. Therefore, a PE investor would intend to sell the target company before the maturity date of the warrants, thus realizing the difference between the pro rata sale price and warrant exercise price. Should the warrants mature prior to the PE investor exiting the company, the PE financial sponsor would most likely receive cash (as opposed to shares) representing the difference between the Fair Market Value of the underlying common stock and the exercise price of the warrants. The market-level interest rate on the subordinated notes, repayment of principal, and the proceeds received from the warrants, in combination with the significantly enhanced cash flows from being a tax-free entity, can provide a PE financial sponsor with a higher return on investment relative to a traditional leveraged buyout structure.

Control remains an important factor for most PE financial sponsors considering a potential investment. Under this scenario, the ESOP owns 100% of the target company’s outstanding common stock post-transaction, with the PE financial sponsor holding a subordinated debt position and non-voting, unexercised warrants. Similar to third-party mezzanine financing, terms in the credit agreement for the subordinated notes typically provide members of the PE financial sponsor with seats on the company’s board of directors, allowing members of the PE firm to be actively involved in the business. Although it is a common misconception that the trustee of the ESOP (usually a third-party institution) would assume operational and strategic control of the target company post-transaction, this is generally not the case. While the ESOP trustee has exclusive authority and discretion over the management of the ESOP plan assets (i.e., the underlying company stock), ESOP trustees are passive investors and rarely get involved in the management of a company unless the corporate directors and officers are engaging in actions in violation of their fiduciary responsibilities. Therefore, the day-to-day oversight and governance of the company remains with the executive management team and the board of directors, respectively.

With increasing capital gains tax rates, shareholders of closely held businesses are increasingly exploring creative, tax-efficient exit strategies other than a traditional third-party sale. One thing that can help differentiate a PE firm pitching an ESOP structure from other bidders is the option for the seller to take advantage of Section 1042 of the Internal Revenue Code, which effectively allows a selling shareholder to defer capital gains taxes indefinitely if he or she sells shares to an ESOP. To qualify for this tax deferral, the target company must be a C corporation at the closing of the transaction, the selling shareholders must have held company stock for at least three years, the ESOP must own at least 30% of the stock of the company post-transaction, and the seller must rollover the proceeds into qualified replacement property, generally consisting of stocks or bonds of U.S. companies. The advantages of electing 1042 treatment in connection with a sale to an ESOP have recently increased given the increase in long-term capital gains tax rates and the inclusion of the Medicare surtax beginning in 2013.

Using an ESOP structure as an investment vehicle is not the only way PE financial sponsors can use ESOPs. Another alternative is for a PE firm to exit an existing portfolio company investment by selling the company to an ESOP in a leveraged transaction. In situations where a portfolio company may not have the necessary attributes to go public or be sold to a strategic buyer, the ESOP exit strategy may be the best alternative. In addition, an ESOP exit strategy is available if the PE financial sponsor is only seeking partial liquidity, since ESOPs can be structured to purchase a minority block of shares. As a buyer of company stock, an ESOP is permitted to pay up to full Fair Market Value, which is generally interpreted to be what a financial buyer would pay for the stock in a hypothetical, arm’s-length transaction between a willing buyer and a willing seller. Therefore, the total consideration paid by an ESOP can typically be as competitive as other financial buyers. Furthermore, if the investors in the PE group are individuals, partnerships, or certain kinds of trusts, the total consideration can be more competitive on an after-tax basis if the sellers elect the Section 1042 tax deferral.

With traditional hold periods lengthening resulting in depressed returns, combined with limited partners’ demand for liquidity, PE financial sponsors are becoming increasingly interested in alternative liquidity strategies when traditional sale processes do not produce adequate offers under the desired timelines. The ESOP exit strategy is attractive in situations where a PE firm may desire to exit a portfolio company quickly since an ESOP transaction can be completed within three to four months if the company hires a team of professionals with specific ESOP experience. Using an ESOP as an exit strategy also improves certainty of closing for a PE financial sponsor compared with more traditional exit alternatives such as the sale of a company to a third-party buyer or a lengthy IPO process. Finally, using an ESOP as an exit strategy also provides the PE financial sponsor with a higher degree of confidentiality and fewer disruptions to the ongoing business operations.

Compared to other alternatives, funding for an ESOP exit transaction can come from a variety of sources, allowing the PE firm to receive a sizeable portion of its proceeds at closing and, if necessary, the remainder over time. Due to the significant tax benefits available to ESOP companies, an ESOP company can repay debt more quickly using the enhanced cash flows from realized tax savings. Therefore, commercial lenders with ESOP company experience may be willing to loan more money and provide more favorable terms to ESOP-owned companies. In addition, an ESOP company can use cash previously contributed to an existing 401(k) plan to repay debt incurred to finance the ESOP transaction, since the retirement benefit created by installing the ESOP often provides an equivalent, if not higher, retirement benefit level. Finally, if structured properly, the employees of the portfolio company can be provided with a one-time opportunity to participate in a tax-free rollover of their existing 401(k) plan assets to a newly formed ESOP, which can then be used to finance the ESOP exit transaction. If additional funding is required, the PE firm can either obtain outside mezzanine financing to completely liquidate its investment at closing, or the PE firm can serve as a subordinated lender and take notes with warrants for a portion of the total sale consideration. The interest rate on the subordinated notes allows a PE financial sponsor to cover expenses and return some capital to its investors, as necessary. The principal received by the subordinated noteholders, along with the proceeds received upon the exercise of warrants, can be considered a return of capital, which is taxed at long-term capital gains rates.

As financial sponsors seek new ways to put money to work and monetize existing investments, ESOPs have emerged as a tax-efficient co-investment and exit strategy for PE firms. Under certain scenarios, PE co-investment with an ESOP can improve the after-tax return on investment relative to traditional buyout structures. Moreover, as an exit strategy, the ESOP structure works well when a PE firm is amenable to receiving proceeds over time with future equity upside, or where other exit strategies may be too challenging to execute efficiently.