Through a combination of organizational structure elections, intense competition, and long-term successful growth in distributions, transactions between master limited partnerships (“MLPs”) and their general partners have seen a renaissance. However, recent transactions that have taken a different form from similar deals in the past, and in certain highly notable cases, represent a departure from the entity structure that has yielded significant financial rewards for investors. In this article, we will provide some context for the environment that has led to such transactions and discuss the transaction structures that were used in the initial phase and this latest trend of MLP-GP transactions.

An MLP is a state law partnership that is publicly traded and listed on a security exchange, predominantly on NYSE and NASDAQ. In general, the typical ownership structure of an MLP consists of a general partner, or sponsor, and limited partners. The general partner, holding minority equity stake and frequently owning the incentive distribution rights (“IDRs”), has the full authority to make all decisions affecting the operations of the MLP. The remaining ownership interest is held by the limited partners, or public unit holders, who provide capital, receive cash distributions, and have no voting rights or role in day-to-day operations of the MLP.

MLPs have become a significant asset class category in the U.S. capital markets that, even despite the challenging environment for the energy sector over the last year, has offered compelling high yields and total returns for investors. As of June 30, 2015, MLPs had a total market capitalization of approximately $563 billion, with about 80% of this attributable to energy and natural resource MLPs. The securities’ blend of high yields and growth in distributions has created unmatched returns for investors.

MLPs have proven to be an attractive investment in terms of total returns. As shown in the chart on the following page, over the last 10 years, the total returns (cumulative, including reinvested dividends) of the Alerian MLP Index, has handily outperformed the total returns of S&P 500. Also, when compared to other types of yield-oriented equity securities, such as real estate investment trusts (“REITs”), MLPs have outperformed both in terms of total returns and grown their distributions at a faster pace. Also, even though MLPs are riskier investments than utilities due to more relaxed regulatory requirements as well as lower liquidity in their units, MLPs consistently traded at higher yields and delivered higher total returns over the last 10 years. As a result, MLPs, once viewed as an emerging asset, are now viewed as a major asset class and have begun attracting institutional investors. 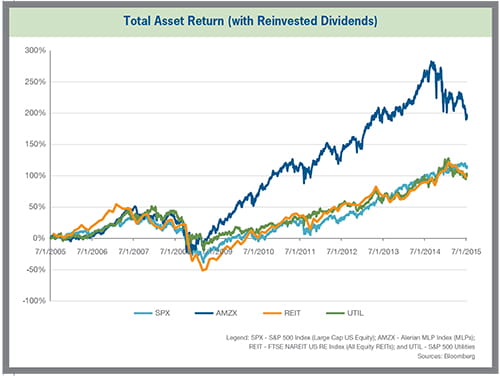 The Revenue Act of 1987 requires MLPs to produce at least 90% of gross income from qualifying sources as defined under IRS Section 7704. As the key driver for investors in fixed MLP investments is stable quarterly cash distributions that grow over time, many MLPs engage in businesses holding assets as pipelines, gathering systems, processing and fractionation facilities, storage facilities, and marine transportation assets that provide robust and predictable cash flows. Investor interest in MLPs, and generally accommodative Private Letter Rulings from the IRS, has led companies to continue to seek new qualifying income sources to be held in an MLP structure. The emergence of the modern MLPs began in 1997 and 1998 with the creation of Enbridge Energy Partners, L.P., Kinder Morgan Energy Partners, L.P., and Enterprise Products Partners, L.P., all of which were focused on midstream operations, which are generally characterized by having limited direct commodity price exposure and long-lived fixed assets with limited capital expenditures required to maintain such cash flows. The modern trend generally continued to gain momentum through the early 2010s as many energy companies began divesting their midstream operations. As of the date of this article, there were approximately 60 MLPs focused in the midstream industry. Additionally, many participants in other industries of the energy sector have created MLPs, often involving businesses that are more directly impacted by commodity price movements, including upstream, refining, and oilfield services. Certain of these business models have not supported an IDR structure and have instead chosen variable MLP structures that will vary materially with the margins provided over time. As presented in the in the chart below, the midstream businesses have substantially lower yields than the other industries, reflecting their lower risk profile. As the most seasoned MLPs with IDR structures are companies that operate in the midstream space, we focus our discussion on these companies, as they have the greatest incentive to execute on a transaction to simplify their structure. 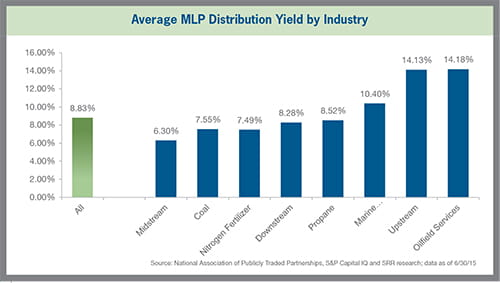 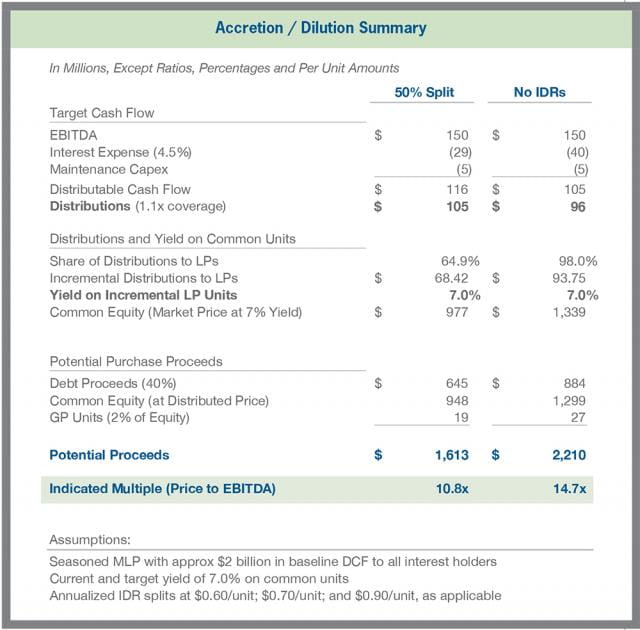 To illustrate the impact of a high IDR split on a potential acquisition transaction, we have prepared the following simplified accretion / dilution analysis using a mature, high split MLP compared to an MLP with no IDRs. The target is projected to be financed with 40% debt proceeds and the remainder coming from new equity issuances from the common and general partner. The GP share of cash flow from the target is 65% in the high split and 2% in the no IDR case. In order to maintain a yield of 7.0%, the high split and no IDR MLPs would be able to issue $977 million and $1.34 billion in common equity at the market-traded price. We estimated a discount of 3% to distribute the common units and added these proceeds to the proceeds from the general partner and lenders to calculate the total potential purchase proceeds. In this example, the purchasing power of the MLP with no IDRs was $2.21 billion, or nearly $600 million (and 4x EBITDA) greater than that of the high split MLP. As the mergers and acquisitions (“M&A”) market continues to be highly competitive, mature MLPs may seek a simplification strategy to increase their flexibility and competitiveness.

Typically, a strong sponsor “drops down” assets to its controlled MLP, which generally access the capital markets to fund the transaction, using the debt and equity proceeds to pay the parent. These types of transactions provide cash flow growth for the MLP and allow for separation of non-core assets from sponsor’s core business. The “drop down” approach continues to be a preferred method of supporting MLP growth. This structural approach provides cash flow growth, fueling higher distributions. Examples of MLPs with significant assets available for drop-downs include Shell Midstream Partners, L.P., and Phillips 66 Partners, L.P., both of which trade at significantly lower yields than midstream industry due to their higher expected growth rates.

MLPs that successfully completed GP-collapse transactions noted the advantages of lowering their cost of capital and greatly simplifying their structure as advantages of the transactions. As an additional motivation, tax reforms involving carried or promoted interests were a source of significant attention in Washington, creating concern over potential changes to taxes on IDR-related income. 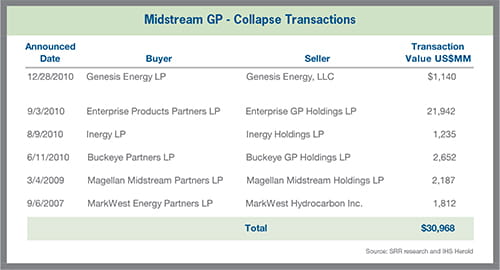 A New Wave of MLP-GP Transactions

While the trend of eliminating IDRs by merging affiliates has been around for several years, recent MLP-GP transactions have introduced a new spin on simplifying organizational structures, as evidenced by examples of acquisitions made or proposed by Kinder Morgan, Inc., Williams Companies, Inc., and Crestwood Equity Partners, L.P.

On August 10, 2014, Kinder Morgan Inc. (“Kinder Morgan” or “KMI”) announced its planned merger transactions with Kinder Morgan Energy Partners, L.P. (“KMP”), Kinder Morgan Management LLC (“KMR”), and El Paso Pipeline Partners, L.P. (“EPB”) for a total purchase price of $71 billion. As a result of the transaction, KMI established itself as the largest energy infrastructure company in North America, with over 80% of its cash flows fee-based. This consolidation provides a simplified capital structure, by creating one equity class and eliminating complexities as IDRs and structural subordination. By eliminating the general partner share of KMP and EPB’s cash flows, KMI expects to lower its cost of capital, resulting in a more competitive cost of capital to pursue future capital projects. KMI management expects the consolidation to allow KMI to grow its dividend per share by an average 10% annual growth rate from 2015 to 2020. Although the transaction is distribution dilutive to KMP, KMR, and EPB in the next three to four years post-transaction, KMI expects distributions to turn accretive and become highly accretive in the long-term.

The Kinder Morgan transaction was unique for its size, complexity, and pivot in organizational and tax strategy. MLPs have long touted their tax efficiencies for investors, as distributions are not subject to dividend taxes. Moreover, MLPs had been highly successful at deferring taxable income as accelerated depreciation has been utilized to lower taxable income on their long-lived assets. KMI is a publicly traded C corporation and, therefore, pays corporate income taxes and shareholder dividends are subject to Federal and state taxes. To lessen the tax impact going forward, the transaction was structured as a taxable merger, which permitted a step-up in the basis of the assets of the target entities for KMI, although negative tax consequences, such as depreciation recapture taxes, were realized by holders of KMP and EPB. KMI noted that it expected to realize tax benefits for the post-transaction combined entity of $20 billion, which will shelter some of the tax inefficiencies under the new organization. Kinder Morgan management also touted the broader investor base that the C corporation would attract as compared to similar MLPs, which, while improving, have garnered significantly less institutional ownership.

On the heels of the Kinder Morgan transaction, Williams Companies, Inc. (“Williams”), announced on May 13, 2015, its plans to acquire all outstanding units of Williams Partners, L.P. (“WPZ”) for a total purchase price of $13.8 billion. Similar to KMI transaction, the elimination of the general partner and IDRs is expected to lower WMB’s cost of capital and unlock more available capital to fund attractive projects and potential acquisitions. Williams management expects the combined company to grow its annual dividend by 10% to 15% from 2015 to 2020. As a taxable transaction to WPZ’s unit holders, Williams would receive a step-up in basis and projects to realize approximately $2 billion in tax savings over the next 15 years.

Interestingly, the planned simplification transaction appeared to place Williams and WPZ in play. On May 19, 2015, Energy Transfer Equity, L.P. (“ETE”), made a proposal to acquire Williams for $47.9 billion. As of June 22, 2015, Williams rejected the bid from ETE. ETE management indicated that the proposed transaction would be immediately accretive to distributable cash flow for ETE, although it was contingent on Williams and WPZ remaining standalone entities. The outcome of these proposed transactions for Williams and WPZ may speak volumes about the ability to large seasoned MLPs with high IDRs to successfully compete for and deliver returns from prized acquisition targets.

While the Kinder Morgan and proposed Williams simplifications represent the culminations of their MLPs, another recently announced simplification transaction would result in the continuance of the tax-advantaged MLP structure. On May 6, 2015, Crestwood Equity Partners, L.P. (“CEQP”) announced a planned merger with Crestwood Midstream Partners, L.P. (“CMLP”) for a total purchase price of $11 billion. Like the rationales cited in the other transactions, the simplified governance structure is expected to attract a broader universe of investors, lower its cost of equity through the elimination of its IDRs, and improve its credit profile.

As MLPs continue to seek methods to simplify their organizational structures to unlock capital availability necessary for capital and acquisition projects, more transactions eliminating IDRs could be expected. Moreover, the combination of a challenging energy sector and the high level of competition for acquisitions will provide additional challenges for MLPs to seek accretive growth. The immediate benefits of a lower cost of capital, an improved investor and credit profile, and a better competitive position are some of the primary drivers for MLPs to continue exploring simplification transactions. As competition for growth increases and interest rates continue to rise, the need for a lower cost of capital is expected to become a key motivation for mature MLPs to simplify their capital structures.