M&A Market Update The Road Ahead

M&A Market Update The Road Ahead

M&A activity has been hot for several years, but can it sustain this pace?

“In the business world, unfortunately, the rearview mirror is always clearer than the windshield.” – Warren Buffett, Chairman and CEO, Berkshire Hathaway Inc.

“Trying to predict the future is like trying to drive down a country road at night with no lights while looking out the back window.” – Peter Drucker, management consultant, educator, and author

As we examine the current state of the mergers and acquisitions (M&A) market, I find myself reflecting upon two favorite quotes, which remind us that historical data can only take us so far when trying to predict what the future holds. This report combines historical analysis and examination of real-time economic indicators to provide readers with an outlook for the remainder of 2016 and beyond. 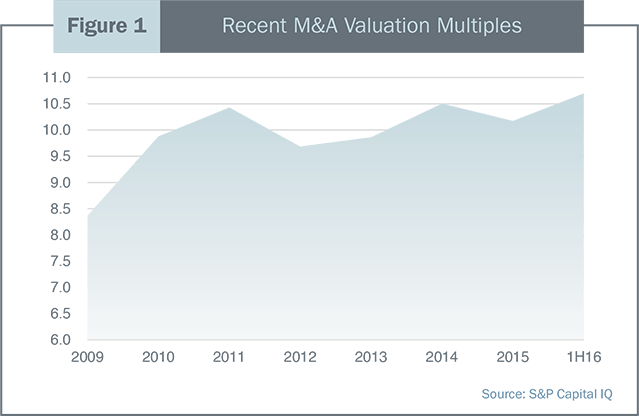 The M&A market had been on overdrive for five straight years. In 2015, we saw activity hit an all-time high as measured by total value. This year, however, has been slower with overall volume down 15% and overall reported transaction value down 7% year to date.

In contrast to overall volume, valuation multiples in terms of EBITDA (earnings before interest, taxes, depreciation, and amortization) remain at or near peak levels. (Figure 1)

Such valuation premiums — relative to more typical market environments — are difficult to quantify, though it appears to average (based on our proprietary analysis of non-public information of multiples paid)

Buyers, both strategic and financial, appear more than willing to pay these higher multiples in order to put cash to work.

Peering Through the Windshield

The view looking forward is, as is always the case, murky at best.

Overall industrial activity is slowing, though we do not know whether negative top-line growth is a real, or simply perceived, near term threat.

Corporate profits have been buoyed by deflationary raw material inputs; many commodities, from copper to corn, are at or near recent lows; however, we do not know how much longer this benefit will last.

The debt markets softened in the first quarter of 2016 (though pricing has come down in the third quarter) and new issuance volume is materially behind this same period last year. Yet we do not know if lenders will tighten their lending guidelines, or if the recent run up in LIBOR and the anticipated increase by the Fed will further reduce borrow demand.

The public equity markets appear to have shrugged an 11% correction that kicked off the New Year, and in fact posted a particularly strong performance throughout late July and August. Yet we do not know when another correction will occur, or if such a correction will negatively influence M&A multiples.

We do not know if a major external shock to the system (e.g., widespread coordinated terrorist attack, escalation of tensions on the Korean peninsula, etc.) is on the horizon, nor how the U.S. economy would react to such an event.

Finally, we do not know how buyers will react in the face of continued pressure to top-line growth prospects. Will such buyers take a “long-term” view, or will they (as has typically been the case) begin to lower bid prices to better align with long-term average multiples?

In summary, as we pause to reflect upon where we are in the cycle, we see that the fundamental forces driving M&A activity and valuation multiples are no longer as perfectly aligned as they once were. This is not to say that a major pullback in prices is imminent. Rather, we no longer expect continued multiple expansion but instead view multiple normalization as an ever increasing possibility.

Improved availability of capital, better and sustained company performance, and narrower valuation gaps have powered U.S. M&A transaction activity since 2010. The first half of 2016 shows a steadying level in overall transaction value but marked softness in M&A volumes.

U.S. Gross Domestic Product, often viewed as a proxy for the overall health of the economy, has recovered from the contraction experienced during the recession in the late 2008 and early 2009 timeframe. While few economists are predicting another recession in the near future, neither are forecasters predicting rampant growth. That said, GDP growth in the last nine months hovered around an anemic 1.0%. 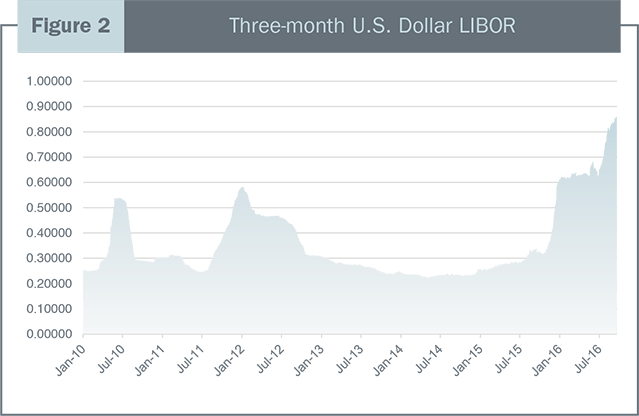 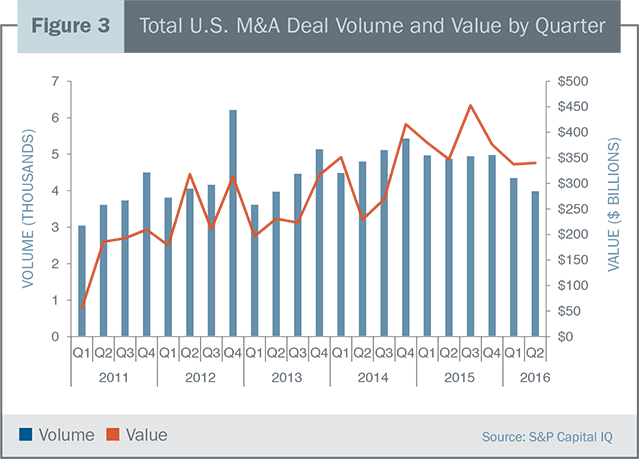 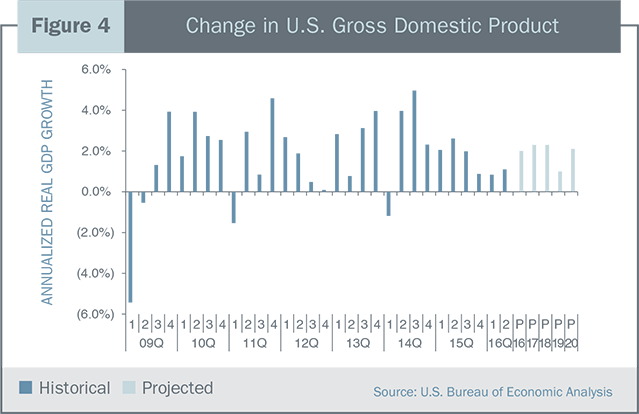 Consumer confidence generally improves as the unemployment situation improves. Fortunately, unemployment has maintained its steady march downward and sits at levels not seen since mid-2008. Such favorable tailwinds are expected to continue through the second half of 2016.

As mentioned in previous M&A Updates, data on lower middle market transactions is notoriously difficult to come by, but year-over-year comparisons can prove illustrative. Volume and total value of deals falling within the lower middle market (in this context defined as transactions less than $250 million in total value) for the first half of 2016 were in line with the overall M&A market for the year, which is to say that overall volume was down but aggregate value was up. Only the very largest of deals are showing any improvement year over year.

Strategic buyers were active in the first half of 2016, though less so than in the recent past.

The continued (albeit, softer) stimulus for strategic-led deals is a combination of lower organic growth prospects absent acquisitions, accommodative senior debt markets (for most of the past twelve months), and a record amount of cash and other liquid assets held by nonfinancial companies. Evidence of the accommodative debt markets (again, excluding the first half of 2016) is clearly visible in the continued rise in corporate debt levels.

Complementing (from a seller’s perspective) strategic buyer interest is private equity, which remains a potent force in deal flow. Favorable credit markets and an estimated $749 billion capital overhang ($82 billion of which is nearing the end of its investment horizon) will continue to provide an impetus for investors to remain competitive in transactions. Furthermore, it should be kept in mind that the capital overhang actually translates into $1 trillion or more in purchasing power, given the leverage available in today’s marketplace.

Nowhere is the increase in current valuation multiples due to the aforementioned factors more evident than in the prices paid by private equity during the past five years. Such prices are a function of debt providers’ willingness to lend and sponsors’ willingness, for the first time in history, to lower their required return thresholds. Historically, financial sponsors promised their limited partners an expected compounded annual return of 20-30%; however, recent feedback from many in the private equity community (all of whom wish to remain nameless) is that returns are instead being modeled in the high teens. Such a reduction in required returns has the same effect as a reduction in yields on bonds; i.e., when rates fall, the prices that buyers pay for new investments rise as prices and rates move in opposite directions. The continued increase in the reported multiples for 2016 (which have posted the highest reported multiples in recent memory) is likely a result of a decrease in quality targets available to be acquired, as LBO volume is down relative to 2015. 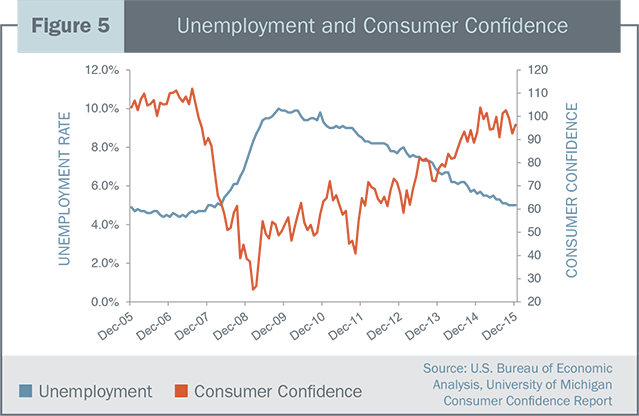 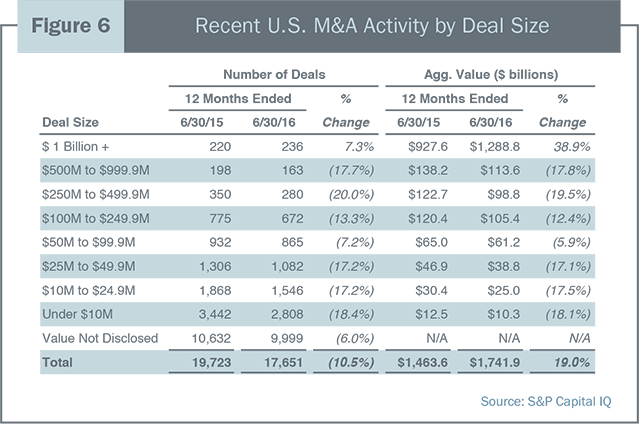 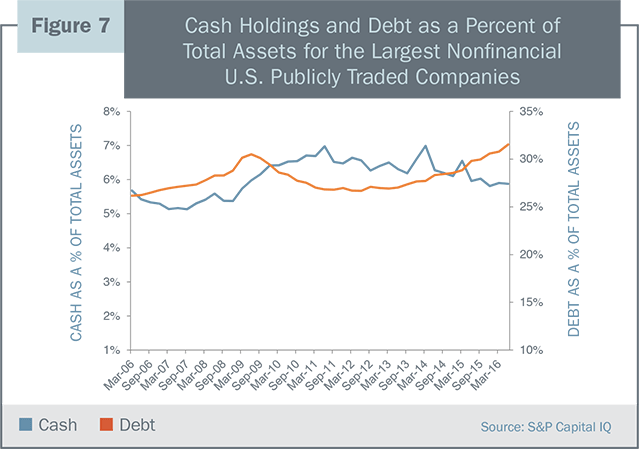 Conclusions and Outlook for the Remainder of 2016 and Beyond

Our view for the foreseeable future remains cautiously optimistic. Buyer appetites and resulting valuation multiples are still at or near historical levels. How long this will last is anyone’s guess; that said … for those business owners on the fence about selling their company, it may be prudent to accelerate such decisions rather than wait to see what the road ahead has in store. 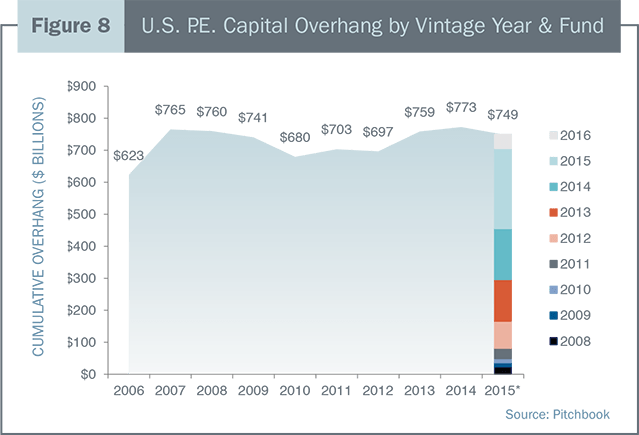 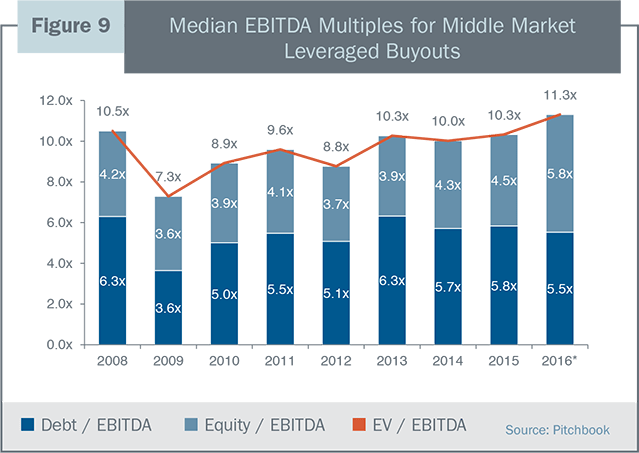