Regulatory reforms in the past several years are expected to dramatically affect the delivery of healthcare services in the U.S. These reforms provide incentives to promote the coordination of care among healthcare providers through the development of accountable care organizations (“ACOs”) as well as encourage the increased usage of information technology (“IT”) within the healthcare field. Buoyed by these regulatory changes and an improving economy, merger and acquisition (“M&A”) activity in both the healthcare IT and services sectors continues to increase.

The Emergence of Accountable Care Organizations

The system by which healthcare providers are compensated has long been a subject of debate. Regulators desire a payment system that encourages providers to work together, rewards high-quality healthcare, and discourages provider-induced demand. ACOs are considered to be a healthcare delivery model that accomplishes these goals. ACOs, which entered the spotlight in March 2010 when the Patient Protection and Affordable Care Act (“PPACA”) authorized the Medicare program to contract with ACOs, are networks of providers (e.g., primary care physicians, specialists, and health systems) that share responsibility for providing total care to patients.1 The emergence of ACOs promotes an integrated approach to medical care by making providers jointly financially accountable for the health costs of their patients through strong incentives to cooperate and reduce costs by avoiding unnecessary tests and procedures.2

Under the traditional fee-for-service payment system, most payers compensate individual doctors, hospitals, and other providers for each service provided to a patient. Critics assert that a fee-for-service system creates incentives for providers to furnish or order more services than are medically necessary and leads to duplicative or conflicting treatments due to the failure to coordinate patient care activities.

The Medicare shared savings program for ACOs is scheduled to begin in 2012. The Centers for Medicare and Medicaid Services (“CMS”) has proposed rules that define ACOs and the shared savings program in which ACOs will participate. Although the final version of the rules will likely vary, the proposed rules provide CMS’s initial vision of program. A Medicare ACO must be responsible for the medical care of a population of at least 5,000 Medicare patients and agree to manage all of the respective patients’ healthcare needs for a minimum of three years.3 Patients will be attributed to the Medicare ACO from which they receive most of their primary medical care. CMS will gather data on patient quality of care and treatment costs. A Medicare ACO would receive bonuses for identified cost savings and for meeting specific quality benchmarks.4 Failing to meet certain benchmarks could put a Medicare ACO at risk of missing bonuses or even the loss of its contract with CMS, and sanctions may be imposed if it is determined that it is avoiding patients.5 Initial public feedback with regards to CMS’s proposed rule has been mostly critical and may limit participation in the Medicare shared savings program. Concerns relate to the anticipated significant up-front costs related to forming an ACO vs. modest incentive payments offered by Medicare as well as the inclusion of down-side risks to the ACO if costs increase beyond levels projected by CMS. Additionally, providers argue that the retrospective assignment of patients to an ACO by CMS hinders an ACO’s ability to proactively manage and coordinate patient care.

Despite concerns related to the initial proposed shared savings rules, the trend towards coordination of services has led to increased provider consolidation. Hospital systems are pursuing acquisitions of physician practices and contemplating mergers with other health systems in an effort to control the majority of providers participating in an ACO. Due to hospitals’ access to capital markets, they may possess a greater ability to finance the initial investment required by an ACO than independent physician groups, which may incentivize doctors to partner with health systems. Some economists fear that the race to form ACOs could lead to significant consolidation, leaving fewer independent hospitals and doctors. The creation of even larger health systems would shift leverage in the hospital’s favor in negotiations with insurers, potentially driving up health costs. Consolidation in the industry has also raised concerns of antitrust and anti-fraud violations, partly due to the fear that ACOs, particularly in rural markets, could increase to a size in which they would employ the majority of the providers in a region.6

Although largely undefined, the ACO concept continues to draw the attention of many within the healthcare industry. While the development and implementation of these organizations could prove to be complex, political support could lead to further experimentation and implementation in the near future. If successful, ACOs will have a positive impact on the provision of healthcare services through increased coordination of care and cost containment as the Congressional Budget Office estimates that ACOs could save Medicare approximately $5 billion through 2019.7

Impact of HITECH on Providers and Hospitals

Another trend in the healthcare services sector is the continued integration of information technology into the practice of medicine. The most notable regulatory development in this area was the Health Information Technology for Economic and Clinical Health Act (“HITECH Act”), which was part of the American Recovery and Reinvestment Act of 2009 (“ARRA”). ARRA provides substantial funding to encourage investment in heath IT infrastructure and to encourage physicians and hospitals to invest in electronic health record (“EHR”) technology.8 EHRs are generally defined as a repository of information regarding the health of a subject of care in a format that can be processed by a computer. It is important to note that EHRs are not simply paper records viewable in electronic form, but store information in a format that can be easily analyzed.

Switching from traditional paper patient charts will benefit both patients and healthcare providers. EHRs can provide physicians with instantaneous access to complete and accurate patient information, which will reduce the chances of medical errors and ordering unnecessary tests as well as allowing treatment to begin immediately rather than waiting for the arrival of a paper chart. Because patients now have the ability to receive electronic copies of their medical records, EHRs will empower patients to become more active in their medical care.9 Additionally, electronic records may be less costly to create and maintain than traditional paper charts. Over the long term, digital records may make it possible to analyze data for large patient populations to identify the most effective treatments or potentially dangerous drug interactions.10

An estimated $27 billion was allocated to incentivize physicians and hospitals to adopt EHR through additional Medicare and Medicaid incentive payments.11 Beginning this year, eligible professionals may receive additional payments of up to $44,000 over the next five years under Medicare by becoming a “meaningful user” of certified EHR technology. Adopters of EHR can receive up to $63,750 over a six-year period under Medicaid beginning in 2011.12 What starts out as a Medicare “carrot” will eventually turn into a “stick.” Beginning in 2015, penalties will begin for those who have not yet adopted and begun to “meaningfully use” a certified EHR system. Physicians who have not implemented an EHR system by 2015 will be penalized by a reduction of 1% of Medicare payments, increasing to 3% over three years.13

Regulators continue to develop “meaningful use” requirements of an EHR system. “Meaningful use” is a standard that permits providers to be eligible for incentive payments. In July 2010, CMS announced the Stage 1 criteria for incentive payments for eligible professionals, eligible hospitals, and critical access hospitals that meaningfully use certified EHR technology. In addition, providers who adopt, implement, and upgrade EHR technology will be eligible for Medicaid incentive payments during the first year of Stage 1. According to CMS, the Stage 1 criteria, which begins in 2011, “focuses on electronically capturing health information in a coded format and using that information to track key clinical conditions and to communicate the information to better coordinate care.” Overall, the Stage 1 criteria features 25 objectives / measures for eligible professionals (24 for eligible hospitals), which are divided into a “core” set and a “menu” set. The core set will contain 15 objectives for eligible professionalsand 14 objectives for eligible hospitals that are requirements. Professionals and hospitals will select five of the 10 menu objectives to meet. In this way, the meaningful use criteria will provide some flexibility.14

Any flexibility that may be allowed in Stage 1 may be eliminated when CMS rolls out its Stage 2 meaningful use criteria. In Stage 2, many anticipate the addition of new objectives, with all of the Stage 1 objectives becoming requirements without the option for deferral of some of the menu set items, although commentators have recommended delaying Stage 2 by one year for those attesting to Stage 1 in 2011. Stage 2 is expected to expand upon the initial criteria in areas such as disease management, clinical decision support, medication management, quality measurement, and research. A final rule on the Stage 2 criteria is expected by June 2012, with the start date set for 2014.15 Expected to take effect in 2015, Stage 3 presumes the full implementation of EHR systems and an even more stringent set of requirements. In addition to focusing on achieving improvements in quality, safety, and efficiency, Stage 3 is also expected to concentrate on patient access to self-management tools, decision support, and access to comprehensive patient data, with the overall target of improving population health outcomes.16

With less than an estimated 30% of physicians nationwide currently using EHRs17, the healthcare IT industry can be expected to expand rapidly over the next five years as physicians and hospitals implement EHR systems to lower costs and improve quality as well as to meet the meaningful use requirements set in place by the HITECH Act in order to capture stimulus dollars and avoid the penalties associated with not having a system in place by 2015.

After strong merger and acquisition activity in 2007, the number of healthcare services and healthcare technology deals dropped precipitously from 118 in 2007 to 48 in 2009 as the U.S. endured one of the worst recessions in decades.18 Healthcare technology deals did not suffer as sharp a decline as in the services sector due in part to the benefits of the HITECH Act. Due to the economic recovery, the expansion of the healthcare IT industry, and the consolidation of healthcare service providers, transaction activity gained momentum in 2010. Total transaction value also recovered in 2010 equaling $20.4 billion up from $8.8 billion in the prior year. 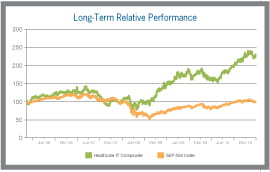 Conclusions for the Healthcare Services Industry

The healthcare services and IT industries are poised for change over the next few years as new legislation and various government incentives come into play. The emergence and evolution of ACOs will continue to change the manner in which patient care is delivered and may contribute to increased provider consolidation. Due to the large market opportunity and regulatory tailwinds, healthcare IT displays great upside potential and should exhibit strong growth for the foreseeable future. 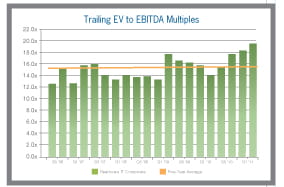