"Wilson believed that even statistics, far from being dull, could ‘afford the deepest and often the most exciting interest.’ This is still our belief today." – Advertisement for The Economist Magazine (founded by James Wilson in 1843)

In September 2014, Polsinelli PC released three new financial research indices known as the Polsinelli/TrBK Distress Research Indices. The Indices are intended to act as proxies to show distress levels in the overall U.S. market, the real estate sector, and the healthcare services sector.

One year after the launch of the Indices, Polsinelli released the Polsinelli/TrBK Distress Indices Special Report: Causes of Healthcare Distress in 2014, based on a study of all the companies included in the Healthcare Services Distress Research Index in 2014. Using statements from those companies’ leaders, the Report categorizes the root causes of financial distress for healthcare services companies and draws conclusions about distress across the healthcare services market.

The Distress Research Indices reveal trends in the U.S. market, many of which can be used to learn more about the state of the market now and what is likely to happen in the future. The Report shows that perhaps conventional wisdom isn’t all that wise, because distress in the U.S. healthcare market may not be related to the same causes that make headlines every day.

The Distress Research Indices are the product of more than a year of development. Since their release for the first time in September 2014, the Distress Research Indices have been syndicated by Bloomberg and cited in The New York Times, The Wall Street Journal Online, The Deal, Modern Healthcare, HFM Magazine, and Healthcare M&A News, among others.

The three Distress Research Indices are calculated on a rolling four-quarter basis in order to smooth out volatility and provide a better picture of long-term trends. They are benchmarked at 100, representing Q4 of 2010.

To be counted in this Index, a filing must be marked as a single asset real estate case on the petition. Single asset cases generally consist of companies solely in the business of owning and operating real estate, including multifamily apartments, retail locations, some hotels, office buildings, restaurant properties, and leased healthcare properties. Prior to 2006, the definition of a single asset real estate case was limited to a company with a maximum of $4 million in secured debt, but in connection with the amendments to the Bankruptcy Code that became effective in late 2005, the debt ceiling was eliminated, so now more real estate cases fall into the single asset category. As a result, this Index is more indicative of the broader commercial real estate market.

This Index requires that a case be marked as a healthcare filing on the petition. Under the Bankruptcy Code definition, healthcare businesses include hospitals, surgery centers, home health agencies, hospice providers, and senior living facilities. The definition requires that the bankruptcy filer be primarily engaged in providing healthcare facilities and services to the public. Because the emphasis of the definition is on patient care, life sciences companies, such as biotech, technology, and pharmaceutical and medical equipment manufacturers, generally do not qualify as healthcare businesses. The designation of a filing as a healthcare case began with Bankruptcy Code amendments that became effective in late 2005.

What the Indices Tell Us

From 2010 to 2014, this Index showed a steep and steady decline against its benchmark. In 2015-Q2, it reached an all-time low of 38.07. Since then, the Index has increased and currently sits at 44.63, its high since July 2014. Since the Index’s inception, this is the first time it has increased for two consecutive quarters. This indicates that, for the first time since the Great Recession, distress is no longer falling; in fact, it is increasing.

This is in contrast to data released by the Administrative Office of the U.S. Courts in November 2015,1 which showed that business bankruptcy filings had fallen year-on-year again at a rate of almost 11%. Because the Chapter 11 Distress Research Index measures a smaller group of companies –- only those in the mid-market and bulge brackets –- the data is different, and distress in this subset of companies is increasing.

In addition, in Q3 of 2015 the Real Estate Distress Research Index moved up for the first and only time since 2010, suggesting that a continuing decline is now less predictable. This Index may well continue to increase in the next few quarters, reflecting increasing distress.

This Index has shown more volatility than the other two Distress Research Indices over the past several years, and it is the only one to remain above its benchmark. The Healthcare Services Distress Research Index peaked at 138.33 in Q3 of 2014 and Q4 of 2014, and after a decline to 98.33, it climbed back to 121.67 in Q4 of 2015.

Another way to compare the Indices is to calculate the filings measured in the Real Estate and Healthcare Distress Research Indices as percentages of the total number of filings measured in the Chapter 11 Distress Research Indices since 2010. Real estate filings have fallen from 19.62% in Q4 of 2010 to 10.94% in Q4 of 2015, and healthcare filings have grown from 1.11% to 3.02% over the same period. The current quarter has had the fewest real estate filings as a percentage of total Chapter 11 filings, partly because the total number of Chapter 11 filings is climbing again and real estate filings remained stable to slightly negative over several quarters. Healthcare filings currently represent 3.02% of total filings, slightly less than the high point of 3.76% in Q4 of 2014. 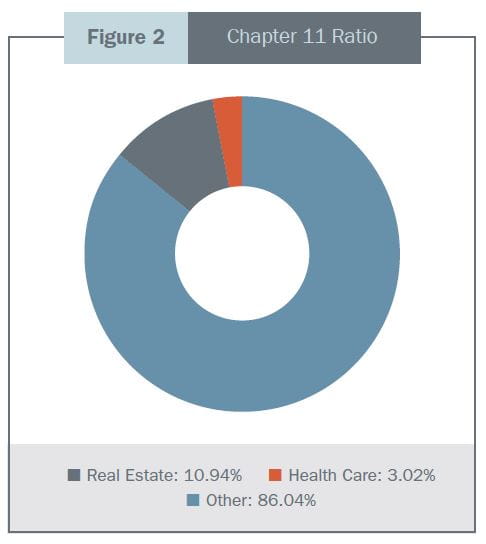 The Distress Research Indices present the opportunity to study the causes of underlying distress in the U.S. market and specific subsectors. To this end, in mid-2015 Polsinelli released the Polsinelli/TrBK Distress Indices Special Report: Causes of Healthcare Distress in 2014.2

The Report is based on a study of the 83 companies (“Index Companies”) included in the Healthcare Services Distress Research Index in 2014. Each participating company had more than $1 million in assets and chose to file a Chapter 9, 11, or 15 bankruptcy. The Index Companies covered a broad spectrum of healthcare services providers, including hospitals, surgery centers, clinics, senior living facilities, physician practices, and imaging centers. The Report includes a review of all bankruptcy filings, including both publicly traded and privately held companies.

The Index Companies’ leaders stated the reasons for their financial distress, and the Report categorizes those reasons and draws conclusions about distress across the healthcare services market.

What the Report Reveals About the Causes of Healthcare Distress

The Report shows the following were the top eight causes of healthcare services distress in 2014:

*Note that most of the Index Companies cited more than one reason for their Chapter 11 filings, whether two, three, or as many as four reasons.

This information provides many interesting insights. First, issues involving government payment of healthcare companies topped the list. Payment Delay and Reimbursement Changes, both of which relate primarily to government reimbursement of healthcare providers, were factors in approximately 41% of healthcare services filings. The two causes rarely overlap, and only one Index Company cited both as causes in its filing. Importantly, Payment Delay was not always alleged to be the government’s fault; in some cases, the Index Company admitted fault. 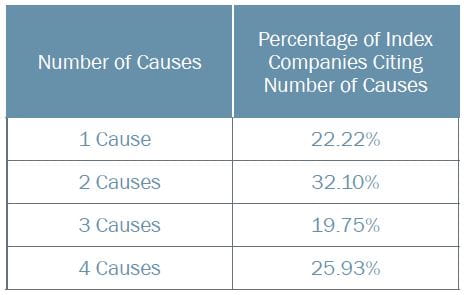 Fourth, in the current enforcement environment, the authors expected Regulatory Enforcement Litigation to be high on the list of root causes. Instead, it ranked as 11 out of the 15 total causes, being cited by only 12.05% of Index Companies.

Fifth, the variety in the number of causes was interesting, and the difference between the leading cause, Tort Litigation (cited by approximately 24% of the Index Companies), and the eighth-ranked cause, Tax Judgments/Tax Liens (cited by approximately 18% of the Index Companies), was only 6%. Numerous causes of varying significance drive distress in the healthcare services industry, but no litmus test exists for distress in the industry.

Having their genesis in 2014, the Distress Research Indices are in their infancy. They offer the public discourse previously unavailable information, especially regarding Main Street businesses’ health.

With Standard & Poors now reporting commercial credit defaults at their highest since 2009, and with U.S. stock market averages becoming increasingly volatile since the beginning of Q4 of 2015, the Distress Research Indices offer the opportunity to uncover many new insights on the U.S. economy, as well as predictions on the direction of healthcare, for 2016 and beyond.

Bobby Guy and Jeremy Johnson are shareholders and Robert Dempsey is counsel at the law firm of Polsinelli PC, which distributes the Indices. All are lawyers at Polsinelli PC, and spend much of their time fixing, buying, and selling struggling companies, especially in the healthcare and real estate industries.