His relentless pursuit of excellence, what has driven his success, and his advice for aspiring golf professionals.

In January of this year, we announced our partnership with professional golfer Sam Ryder. Admittedly, Sam Ryder is not exactly a household name. So, to understand what attracted us to Sam, you need to understand his journey and relentless pursuit of a dream.

Sam was first introduced to golf by his father, Art, when he was 10 years old. Some of his first memories of golf were walking a few holes at sunset with his dad at Wekiva Golf Club near their Longwood, FL, home. While Sam enjoyed spending time with his dad on the golf course, baseball was his first love. A natural athlete, he was a raw baseball talent whose skills advanced each year. Sam would play baseball almost year-round as a teenager.

It wasn’t until Sam turned 16, that he truly began his golf journey. He had lost his passion for baseball, having become burned-out from playing too much. Thus, he decided to shift his focus to, and channel all his competitive energy into, golf. Sam played his first tournament at an age when many top junior players had been serious about the sport nearly half their lives. He was immediately hooked.

In high school, Sam’s golf skills quickly advanced, in part due to a six-inch growth spurt that boosted his athletic ability. Affirmation and success on the golf course came swiftly.

After high school, Sam attended Stetson University in Florida on a scholarship where he studied finance and was a two-time Academic All-American. Sam won seven collegiate tournaments at Stetson, including the Atlantic Sun Conference title. It was at this point that Sam realized he had the potential to make golf his career. After a successful stint in college, Sam set his sights on turning pro.

He faced some early setbacks. At the PGA Tour Qualifying School, he failed to qualify two years in a row, including by a single stroke in the second year. Undeterred, Sam persisted and methodically worked his way through the PGA Tour's development tours, going on to win on three different tours – the Hooters, Canadian, and Web.com – and earning his Web.com Tour card in 2016. After finishing second on the 2017 Web.com Tour money list, he secured his place on the PGA Tour for the 2017-2018 season.

With a game built on accurate driving and strong iron play, Sam’s skillset quickly translated to the PGA Tour. He finished the 2017-2018 season second in Greens in Regulation and 10th in Total Driving to lead the entire PGA Tour in Ball Striking. He qualified for and played in the first round of the FedEx Cup playoffs and finished the season ranked 101st.

Work ethic and perseverance have been keys to Sam’s success. He spends countless hours on the driving range to hone his game and in the gym to keep in prime fitness. Now in his second year on the PGA Tour, he has recorded two top-five finishes so far in the 2018-2019 season.

Sam’s journey is emblematic of our own as a firm. Hard work, determination, patience, and continual improvement are qualities we can relate to. Sam exemplifies our brand promise of Relentless ExcellenceSM. We recently sat down with Sam to learn more about his story.

Competing. I’ve been a competitor my whole life. No matter what I do, from playing baseball as a child to card games with my family, I’m extremely competitive. I don’t want to lose at anything.

What golfers did you admire the most when you were younger?

As with almost anyone else my age, Tiger Woods has to be at the top of the list. I remember doing a book report on Tiger when I was in elementary school. I would always try to imitate him when I was just getting into the game. Also, Jack Nicklaus and Arnold Palmer. I read about their rivalries as Jack was just coming up as a pro. I’m appreciative of everything they have done to pave the way for players like myself.

Where was your first professional tournament?

It was in the summer of 2012 on the NGA Hooters Tour in Dahlonega, GA. It was right after I just missed qualifying for the US Open at Olympic Club [San Francisco] and was an alternate there. I remember driving my ‘99 Toyota 4Runner up to Dahlonega from Orlando. I ended up shooting -19 and finished fourth, making about $12,000. I was on cloud nine.

As you worked your way up through the professional ranks, what motivated you?

I’ve always just wanted to see how good I can get. I love the game of golf, so it’s easy for me to work hard. I never knew if I was going to be a failed pro who never made it on tour or make it to number one in the world. But I’ve always been driven by the competitive nature of the sport and wanting to see where I “stack up” so to speak.

What was it like playing in your first PGA Tour tournament?

There were a ton of nerves. It was the Safeway Open in Napa, CA. That was the culmination of so much hard work to get to that point. I think I was putting a lot of pressure on myself instead of just enjoying it.

Compared with the Web.com tour, during your first year on the PGA Tour, did you have to adjust your approach (both mentally and technically) given the stronger competition in each tournament? What about playing on these courses for the first time?

I think the biggest challenge of being a PGA Tour rookie is trying to learn all of the new golf courses. Everything about being a rookie on the Tour sets you up to be uncomfortable. Rookies are really behind the eight ball when they get out there. Until you’re able to get into a routine and develop a level of comfort, it’s hard to expect good results. I wanted to stay true to my approach for the most part. I earned my way on the PGA Tour and knew I was good enough based on the success I had on the Web.com Tour. I’m always trying to get better, but I wanted to do it my way, the way that got me there. It’s really easy to try to be someone you’re not when you get on the PGA Tour.

What is your most memorable performance, round, or even shot to date? Why does this moment stand out among others?

It’s really hard to choose a most memorable moment. Everything from winning for the first time in college to winning on the PGA Tour Canada to winning on the Web.com Tour has helped shape my career to this point. I had the same exact feelings of nerves and adrenaline trying to win in college for the first time as I do now, trying to win on the PGA Tour. The final round 63 at the Shriners [Hospitals for Children Open] in Las Vegas this season, and more specifically the birdie putt on the 18th hole for the clubhouse lead is probably my most memorable moment to date. 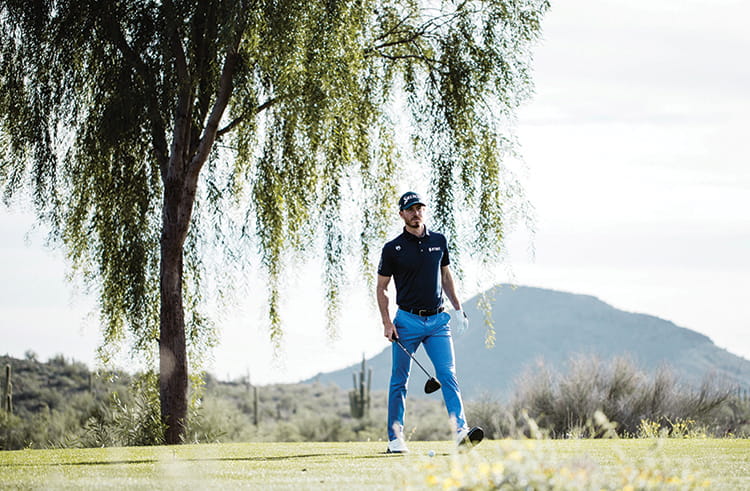 Now that you’re in your second season on the PGA Tour has your approach to tournaments changed?

I think my approach is the same for the most part. I definitely have a different level of comfort and more of a routine that I know works for me. It’s a lot easier to prepare now that I’m familiar with the golf courses.

What is the most difficult course you’ve played on?

The difficulty of the course has more to do with the conditions you play under. I played the US Open at Erin Hills [Wisconsin], and that was probably one of the toughest. Scores were relatively low because of the soft conditions. There were a lot of blind tee shots and numerous par 4s over 500 yards.

Of the courses that you haven’t played on yet (PGA Tour or not), which ones do you want to play on the most?

Augusta National [Georgia] has to be at the top of the list. I also haven’t played the Old Course at St. Andrews [Scotland]. Pine Valley [New Jersey], Shinnecock Hills [New York], Oakmont [Pennsylvania] are a few others, but there are a lot more.

You’re known to take a more modern style with your wardrobe compared with traditional golfing attire. Does this help your performance, or is it simply a very subtle fashion statement?

I definitely care about my style on the golf course. I’m certainly not afraid to make a little bit of a fashion statement and wear things other players may not be willing to wear. The clothes I wear can definitely contribute to some added confidence, and confidence is one of the most important components to playing good golf.

You have a sizable social media presence, specifically with Instagram, where, in addition to action shots, you have a number of photos of family and friends. Who is your favorite person to follow?

My favorite people to follow are always going to be my friends and family. It can be a great tool to keep you in tune with those people’s lives, especially when I’m gone traveling a lot.

What do you enjoy doing when you’re not hitting the links?

I like going to the beach, hanging out with friends, and just taking it easy. I don’t have many hobbies to be honest.

What and/or who inspires you, in golf and in general?

To become a master in any career, one needs to painstakingly practice and persevere through many headwinds. What are some of the key steps you took to get where you are today?

Who has helped you get to where you are today?

Well, I’m really lucky to have two great parents who laid the foundation for my success. I wouldn’t be where I am without them. My dad put a golf club in my hands at a very young age, and my mom has been my biggest fan since day one. The older I get, the more I realize how much your parents must sacrifice to raise you. It’s like your life takes priority over their own.

How have you handled situations after a bad round or poor tournament showing?

That’s something I’ve gotten better at over the years. When I was just starting to play competitively, I would struggle to control my emotions. There’s a lot more to life than just golf. I think having that perspective is really important in dealing with the bad days.

What advice did you get when you were younger that still resonates today?

Former PGA player Fulton Allem gave me advice about managing strengths and weaknesses. Some players get so consumed with their weakness that they lose their strengths. Other players maximize their strengths and have the awareness and the ability to monitor and play around their weaknesses. That goes along with the importance of staying true to your identity as a player as opposed to trying to be someone you’re not.

What advice would you have for aspiring golfers with their sights set on the PGA Tour?

Always surround yourself with people who are making you better. You need to be in an environment that breeds success.