As the U.S. economy and real estate market have continued to experience a distressed and depressed state, the incentives for secured creditors to make a Section 1111(b)(2) election during the Chapter 11 proceedings of a debtor, which owns various real property, have increased. While careful consideration should certainly be given to all of the issues related to making such an election (a full discussion of which is beyond the scope of this article), it is particularly important to have a solid understanding of the current state of the real estate market, as well as its prospects.

As an alternative to the bifurcation of claims, a creditor may choose to have its entire claim treated as a secured claim by making an election under Section 1111(b)(2) of the Code. If a Section 1111(b)(2) election is made, the creditor foregoes any recourse that it may have as an unsecured creditor for the value of its claim in excess of the value of the collateral, and the creditor is treated as holding a secured claim for the full allowed claim. In other words, under Section 1111(b)(2), an under secured creditor may elect to have its entire claim treated as a nonrecourse secured claim, thereby foregoing any unsecured deficiency claim. (It should be noted that this election is not an option for a creditor with a lien that is determined to have “inconsequential value” in a hearing under Section 506(a) of the Code. In addition, this election is not available in a situation whereby a debtor sells its assets pursuant to a Section 363 sale.)

Section 1111(b) was enacted to protect the interests of secured creditors following the decision reached in In re Pine Gate Associates, Ltd., 2 B.C.D. 1478 (Bankr. N.D. Ga. 1976). Pine Gate Associates (“PGA”) had utilized loans from two lenders to construct an apartment complex. Both loans were nonrecourse loans and were secured by first priority mortgages on portions of the complex. In 1975, PGA filed for bankruptcy and proposed a plan of reorganization whereby PGA would make a cash payment to the two lenders for the appraised value of their collateral (portions of the apartment buildings). As such, the lenders’ secured claims were limited to the appraised value of their collateral, which was found to be less than the outstanding indebtedness owed by PGA. Despite contention from the lenders, the Court held that the proposed treatment of the secured claims was sufficient and approved the plan of reorganization.

In effect, the decision approved a plan of reorganization whereby “a debtor could file bankruptcy proceedings during a period when real property values were depressed, propose to repay secured indebtedness only to the extent of the value of the collateral at that time, and preserve all potential future appreciation of that property solely for the benefit of the debtor.”1 Under these terms, the secured creditor would bear all of the risk of undervaluation by the Court. Section 1111(b) was, in essence, Congress’ attempt to address the inequitable result that arose under the Pine Gate decision.

The class of creditors making a Section 1111(b)(2) election retains full security interest in the underlying asset and has the right to receive payment in full over time for the face amount of its claims. However, not all of the possible valuation disputes go away by making such an election. Under a Section 1111(b)(2) election, the present value of the payments to be received in satisfaction of the claim is only required to equal the value of the creditor’s interest in the collateral as of the effective date of the plan of reorganization. The value of these deferred payments is largely dependent on an assessment of the appropriate market rate of return to utilize in the calculation of the present value equivalent of these cash flows.

As noted previously, the Section 1111(b)(2) election requires that when property securing a claim is retained, the class making the claim receives payments over time that both total the amount of the claim allowed by the Court and have a present value on the effective date of the plan equal to or greater than the value of the claimant’s lien. Two primary factors can impact this equivalency – time period and rate of return.

To demonstrate the complications that can result for this relatively simple equality, consider this example. A creditor’s claim has been approved for $1 million and is secured by collateral valued at $500,000. The claimant must then receive payments totaling $1 million that have a present value of at least $500,000. The time period over which these payments are expected to be received, as well as the perceived risk in the receipt of these cash flows, can have significant impacts on whether the present value of the payment stream is at least equal to the value of the claimant’s lien. The following charts demonstrate how the present value can be significantly different depending on the time period in which the payments are made and the risk related to those payments, even when the total payments received equal the approved amount in all scenarios. 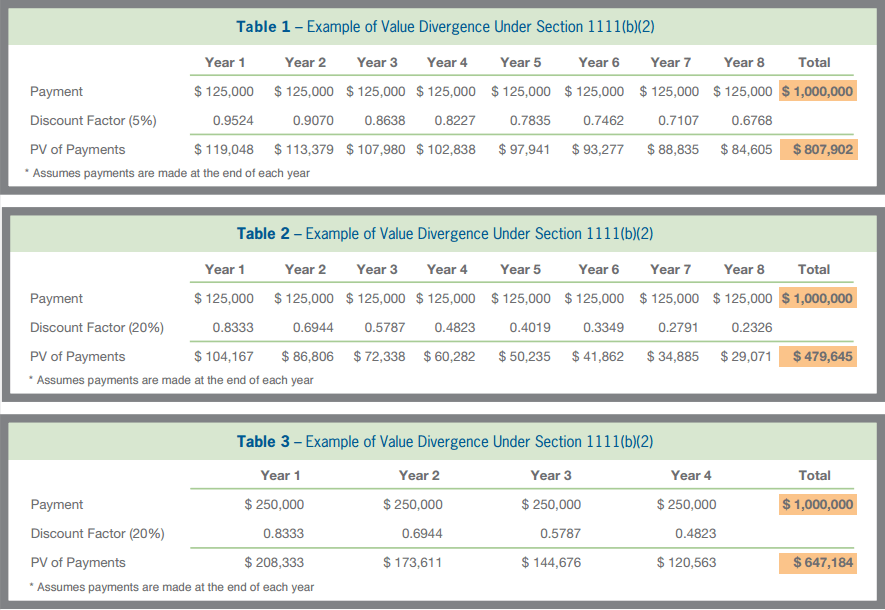 The point of the above discussion is that making a Section 1111(b)(2) election does not eliminate the potential valuation issues that can arise in a bankruptcy proceeding. However, the election does shift the focus of such debates.

A creditor typically only considers making a Section 1111(b)(2) election when it believes that the collateral securing its claim is being undervalued by the debtor and the expectation is that there will be little to no value available for the unsecured creditors. The current generally depressed real estate market is another factor that could lead a secured creditor to seriously consider making the election in order to maintain its lien on its collateral, and thus be able to benefit from the upside potential associated with the property.

The period from 2002 through 2007 saw the most significant increase in commercial real estate values in history. However, the Great Recession that began in late 2007 quickly reversed this trend. The chart to the right shows the 37% decline in commercial real estate values that occurred between the peak in the second quarter 2007 and the trough in the first quarter 2010. 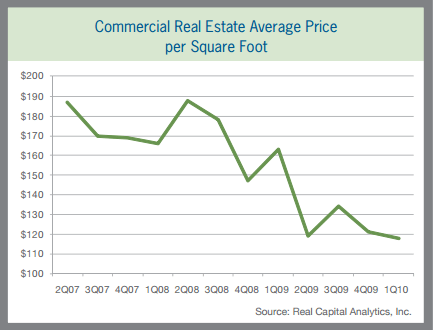 Recent indications are that commercial real estate values may have bottomed, but no significant recovery is yet underway. The industry will likely experience a period of stagnant values before any real increases are seen. The apartment sector, which is already showing some signs of improvement, will continue to improve through stabilization in 2012. The industrial sector will follow shortly, beginning its improvement in 2011. The office market will lag the industrial sector due to its longer development period. Although some high profile properties are setting record prices on the coasts and in Chicago, this sector saw more significant overbuilding than industrial. The office recovery will likely begin in late 2011, and continue through 2012. Other than discounters such as Walmart, the retail market was hit hardest by the recession; this sector will likely not begin its general recovery until 2012.

Market movements of this magnitude can have significant impacts on creditors making Section 1111(b)(2) elections. Consider the following example:

Given the above fact pattern, the creditor decides to make a Section 1111(b)(2) election to maintain its $10 million lien on its real estate collateral. By making this election, the creditor would have the right to receive the full $10 million in future payments (i.e., the face amount of the note), but it would still only receive a payment stream equal to a present value equivalent of $5 million (i.e., the current value of the collateral). The creditor in this example is essentially giving up the value of the unsecured portion of its claim under Section 506(a) in return for maintaining its security interest in full in an asset with significant upside potential and receiving payment of its claim in full over time.

Given the generally depressed level of current real estate values, secured creditors may be more inclined to make a Section 1111(b)(2) election with the goal of maintaining a security interest in an asset that has the potential to appreciate in value, as compared to bifurcating the claim and accepting an unsecured claim for that portion of the total claim in excess of the current value of the collateral. A solid understanding of the current state of the real estate market relative to its prospects as well as the likely ranges of impairment for the unsecured class are required in order to properly assess whether a secured creditor should make a Section 1111(b)(2) election.